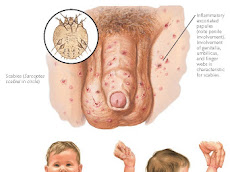 Human infection with the parasite Sarcoptes scabiei var hominis causes scabies. Humans are the only known host, and the parasite is transferred from one person to another by close physical contact. 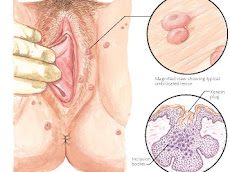 As its name implies, molluscum contagiosum is a highly contagious viral infection that has little morbidity. This infection is most commonly encountered in children. The diagnosis is made on clinical grounds after inspection of the characteristic skin findings. When seen in the genital region of adults, molluscum contagiosum is considered to be a sexually transmitted disease. This infection rarely occurs in immunocompetent adults outside sexual transmission. In adults with no clear evidence of transmission, an evaluation for an immunosuppressed state should be undertaken. Patients taking chronic immunosuppressive medications and those with the acquired immunodeficiency syndrome are more prone to infection with molluscum contagiosum. 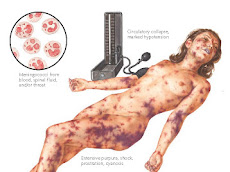 Meningococcemia can cause a wide range of clinical diseases, of which neisserial meningitis is the most severe and life-threatening. The bacteria, Neisseria meningitidis, is capable of causing septicemia, pneumonia, and meningitis. These are all relentless diseases that are universally fatal if not promptly treated. The bacteria has been known to cause severe disseminated intravascular coagulation (DIC) and the Waterhouse-Friderichsen syndrome. The latter syndrome, also known as acute adrenocortical insufficiency, is directly caused by hemorrhagic destruction of both adrenal glands. This syndrome can result from a wide range of conditions, including infections, and N. meningitidis is one of the more frequent infectious causes. 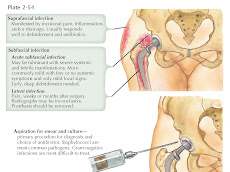 Subfascial (deep) infection, whether acute or latent, is a serious complication in joint replacement surgery. It is important to identify the type of infection because prognosis and treatment differ. Also, because any implant can become a focus for infection, patients with a hip prosthesis should be given preventive antibiotics when undergoing dental, urinary, or gastrointestinal procedures. 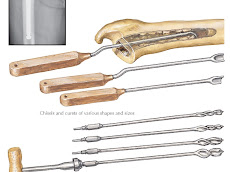 Although many complications may follow total hip replacement, their incidence is fortunately low. The most common postoperative complications are deep venous thrombosis, neurologic complications, loosening of prosthetic component, dislocation, fracture, and infection. 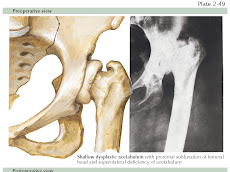 Reconstruction of the dysplastic or deficient acetabulum presents a particularly difficult surgical challenge, because the anatomic landmarks commonly used as reference points may not be in their normal positions. Portions of the bony circumference of the acetabulum may be deficient as a result of old fractures or congenital dysplasia. For example, in a long-standing posterior fracture dislocation of the hip, the posterior wall of the acetabulum is usually severely deficient; in congenital dislocation of the hip, the acetabulum is shallow and poorly developed. If the femoral head has been dislocated for many years, it articulates with the iliac wing in a pseudoacetabulum. The true acetabulum is stunted, small, and shallow, but its anatomic configuration is usually preserved and identifiable once the contracted overlying inferior capsule is reflected. 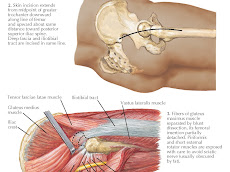 The procedure for total hip replacement begins with preoperative planning, which includes a complete medical workup of the patient to identify any existing health problems. A rheumatologist or internist often works with the orthopedic surgeon in planning the appropriate medical therapy. The rehabilitation program should also be thoroughly discussed with the patient. 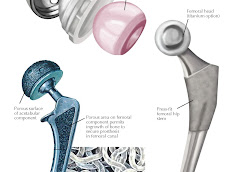 Arthroplasty, or surgical reconstruction of the joints, has revolutionized the treatment of crippling diseases such as osteoarthritis and rheumatoid arthritis, which destroy the joint’s smooth cartilage surfaces and lead to painful, decreased motion. Relief of pain and improved hip function are dramatic advantages of reconstruction procedures. Hip arthroplasty not only benefits the older patient, but total hip replacement and other procedures using prostheses also now permit young and middle-aged patients with congenital, developmental, arthritic, traumatic, malignant, or metabolic hip disorders to lead active and productive lives. 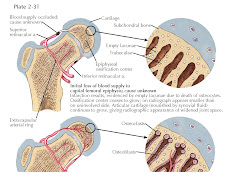 Legg-Calvé-Perthes disease is defined as idiopathic avascular necrosis of the epiphysis of the femoral head (capital femoral epiphysis) and its associated complications in a growing child. It is a common, but poorly understood hip disorder. 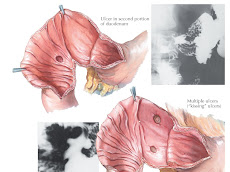 Peptic ulcers in a region distal to the duodenal bulb are rare, and their frequency, altogether probably less than 5% of all duodenal ulcers, decreases with their distance from the pylorus. Ulcers in the second portion of the duodenum give rise to the same symptoms and are beset with the same dangers and complications as are ulcers of the bulb. The acute clinical picture and later significance, however, may be far more complex because of the functional and anatomic implications for the adjoining structures. By the edema of its margin and surroundings, by penetration or by shrinkage, such an ulcer may cause obstruction and eventually stenosis of any one of several structures (the papilla of Vater, the lower part of the common bile duct, and one or both of the pancreatic ducts), so that chronic pancreatitis and/or biliary obstruction with jaundice may result. Deep penetration may give rise to a choledochoduodenal fistula. The presence of duodenal ulcers distal to the duodenal bulb should raise concern for the presence of Zollinger-Ellison syndrome, or gastrinoma, in which excessive gastrin is secreted, leading to excessive secretion of gastric acid. 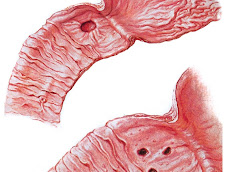 Duodenitis refers to an inflammation of the mucosa in the duodenal bulbar region. Duodenitis is usually diagnosed endoscopically, often when it is performed for abdominal pain or evidence of acute or chronic gastrointestinal bleeding. The diagnosis may be supported in radiologic contrast studies when the mucosa of the most proximal part of the duodenum appears somewhat mottled and when, fluoroscopically, spasms and an increased motility of the duodenal cap can be observed. The inflamed duodenal mucosa has a relatively strong tendency to bleed, even in the absence of an actual ulcerative process. At times, however, duodenitis may be associated with multiple superficial erosions. On the other hand, diffuse duodenitis may also be present in association with a characteristic chronic peptic ulcer. Duodenitis is usually confined to the most proximal parts of the duodenum, but, occasionally, the antral mucosa as well may participate in the inflammatory reaction. Medical treatment for duodenitis is the same as that for peptic ulcer. Massive hemorrhages from duodenitis with erosion may, in rare cases, make exploration necessary, although, as a matter of general principle, surgical intervention is not recommended unless the source of the bleeding has been determined. 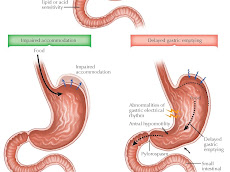 Dyspepsia refers to symptoms originating in the upper gastrointestinal tract; the term is used to describe upper abdominal pain or discomfort, early satiety, and postprandial abdominal bloating or distention. Some examples of structural or biochemical disorders causing dyspepsia include gastroduodenal ulcer, gastritis, GERD, and gastric cancers; medication side effects may also be a cause. In many patients, the cause of dyspepsia is idiopathic and not obvious after an evaluation including the history, a physical examination, blood work, and upper endoscopy; this is termed functional dyspepsia. ROME criteria for functional dyspepsia developed to help describe these particular patients include the following requirements: (1) the presence of one or more of the following: bothersome postprandial fullness, early satiation, epigastric pain, or epigastric burning; and (2) no evidence of structural disease (including at upper endoscopy) that is likely to explain the symptoms. Functional dyspepsia in the ROME classification is divided into (1) postprandial distress syndrome characterized primarily by early satiation and postprandial fullness; and (2) epigastric pain syndrome characterized primarily by epigastric pain and burning. Several mechanisms have been proposed for the pathogenesis of functional dyspepsia. The gastric acid or inflammation hypothesis suggests that gastric acid or inflammation from gastric acid, bile, GERD, or H. pylori infection is responsible for symptoms. The motor disorder hypothesis suggests that gastric motility disorders, such as gastroparesis, impaired fundic accommodation, antral distention, or gastric dysrhythmias, are important. The visceral hypersensitivity hypothesis proposes exaggerated symptoms in response to physicochemical stimuli, such as distention, contraction, acid, and bile. The psychological hypothesis suggests that some of the symptoms are related to or enhanced with depression, anxiety, or a somatization disorder. 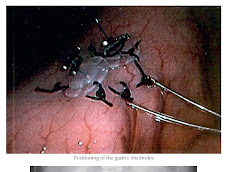 Gastric electrical stimulation is an emerging treatment for refractory gastroparesis. There are several techniques for stimulating the stomach. First, in gastric electrical pacing the goal is to entrain and pace the gastric slow waves with low-frequency, high-energy, long-duration pulses. Pacing at 10% higher than the basal rate is used to try to accelerate gastric emptying and to improve dyspeptic symptoms. Second, stimulation with high-frequency, low-energy, short-duration pulses has been shown to decrease symptoms but has less effect on gastric emptying; it may affect proximal stomach function and activate sensory afferent nerves to reduce symptoms. Third, sequential gastric neurostimulation of the stomach has been used to entrain gastric slow waves. 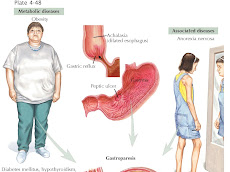 Gastroparesis is a chronic symptomatic disorder of the stomach characterized by delayed emptying without evidence of mechanical obstruction. The delay in gastric emptying can have a number of causes, including antral hypomotility, pylorospasm, gastric dysthymias, and lack of interstitial cells of Cajal. Symptoms from gastroparesis include nausea, vomiting, early satiety, postprandial fullness, and, in some patients, upper abdominal pain. This classic motility disorder of the stomach can lead to marked dysfunction in patients, with a poor quality of life. Gastroparesis is identified by recognizing the clinical symptoms and documenting delayed gastric emptying. The three main causes are diabetic, postsurgical, and idiopathic. 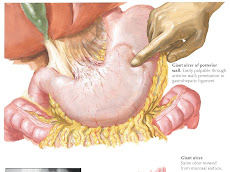 Giant gastric ulcers are rare in the overall group of gastric ulcers, especially since upper endoscopy evaluation has become available and ulcer treatments with proton pump inhibitors and for H. pylori have also become available. The site of origin is usually on the posterior wall of the gastric body and may progressively involve the lesser curvature by extension. The ulcers may penetrate the gastrohepatic ligament and even involve the liver and pancreas. They are particularly deceptive because the flattened floor of the ulcer is extensive, so that it resembles an atrophic area of gastric mucosa. A very similar pathologic picture can be produced acutely by the corrosive action of acids or alkalis. When caustic agents are involved, however, the contrast material puddles in the prepyloric region and on the posterior wall of the stomach if the patient assumes a supine position immediately after the accident of ingestion. 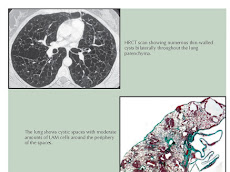 Pulmonary lymphangioleiomyomatosis (LAM) is a diffuse, progressive lung disease that affects young women of childbearing age. It occurs as a sporadic disease (S-LAM) or with a tuberous sclerosis complex (TSC-LAM). The incidence and prevalence (two to ﬁve per million) of sporadic LAM are unknown. Whites are afﬂicted much more commonly than other racial groups. 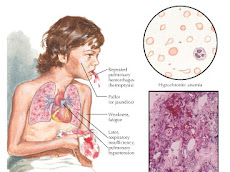 Idiopathic pulmonary hemosiderosis (IPH) is a disease of unknown origin, usually occurring in children, equally in both genders. Repeated episodes of pulmonary hemorrhage with resultant blood-loss anemia and eventual respiratory failure characterize the illness. In children, this disorder is associated with celiac disease and elevated IgA levels. Environmental exposure to molds, particularly Stachybotrys chartarum, has been suggested as a causative factor in infants with IPH, but the relationship remains unproven. 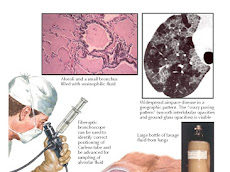 Pulmonary alveolar proteinosis (PAP) is an uncommon disease characterized by ﬁlling of alveoli with a lipoproteinaceous material composed principally of the phospholipid surfactant and surfactant apoproteins. This amorphous material stains with periodic acid–Schiff (PAS) reagent. Impaired processing of surfactant by alveolar macrophages and diminished granulocyte macrophage-colony stimulating factor (GM-CSF) protein levels or function contributes to the pathogenesis of PAP. There is little inﬂammatory reaction in the surrounding lung, and the underlying lung architecture is preserved. 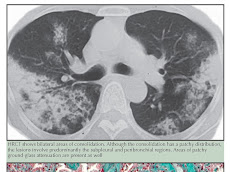 Cryptogenic organizing pneumonitis (COP) is a speciﬁc clinicopathologic syndrome of unknown cause. The incidence and prevalence of COP are unknown, but a cumulative incidence of six to seven per 100,000 hospital admissions was found at a major teaching hospital. The disease onset is typically in the ﬁfth or sixth decades of life, with men and women being affected equally. 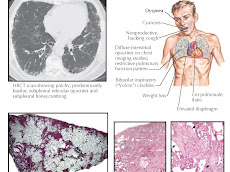