Causes of Cell Injury
Cell damage can occur in many ways. For purposes of discussion, the ways by which cells are injured have been grouped into five categories:
•       Injury from physical agents
•       Radiation injury
•       Chemical injury
•       Injury from biologic agents
•       Injury from nutritional imbalances
Injury from Physical Agents
Physical agents responsible for cell and tissue injury include mechanical forces, extremes of temperature, and electrical forces. They are common causes of injuries due to environmental exposure, occupational and transportation accidents, and physical violence and assault.


Mechanical Forces. Injury or trauma due to mechanical forces occurs as the result of body impact with another object. The body or the mass can be in motion or, as sometimes happens, both can be in motion at the time of impact. These types of injuries split and tear tissue, fracture bones, injure blood vessels, and disrupt blood flow.
Extremes  of Temperature.  Extremes  of  heat  and  cold cause damage to the cell, its organelles, and its enzyme systems. Exposure to low-intensity heat (43°C to 46°C), such as occurs with partial-thickness burns and severe heat stroke, causes cell injury by inducing vascular injury, accelerating cell metabolism, inactivating temperature-sensitive enzymes, and disrupting the cell membrane. With more intense heat, coagulation of blood vessels and tissue proteins occurs. Exposure to cold increases blood viscosity and induces vasoconstriction by direct action on blood vessels and through reflex activity of the sympathetic nervous system. The resultant decrease in blood flow may lead to hypoxic tissue injury, depending on the degree and duration of cold exposure. Injury from freezing probably results from a combination of ice crystal formation and vasoconstriction. The decreased blood flow leads to capillary stasis and arteriolar and capillary thrombosis. Edema results from increased capillary permeability.

Electrical Injuries. Electrical injuries can affect the body through extensive tissue injury and disruption of neural and cardiac impulses. Voltage, type of current, amperage, pathway of the current, resistance of the tissue, and interval of exposure determine the effect of electricity on the body.
Alternating current (AC) is usually more dangerous than direct current (DC) because it causes violent muscle contractions, preventing the person from releasing the electrical source and sometimes resulting in fractures and dislocations. In electrical injuries, the body acts as a conductor of the electrical current. The current enters the body from an electrical source, such as an exposed wire, and passes through the body and exits to another conductor, such as the moisture on the ground or a piece of metal the person is holding. The pathway that a current takes is critical because the electrical energy disrupts impulses in excitable tissues. Current flow through the brain may interrupt impulses from respiratory centers in the brain stem, and current flow through the chest may cause fatal cardiac arrhythmias.
The resistance to the flow of current in electrical circuits transforms electrical energy into heat. This is why the elements in electrical heating devices are made of highly resistive metals. Much of the tissue damage produced by electrical injuries is caused by heat production in tissues that have the highest electrical resistance. Resistance to electrical current varies from the greatest to the least in bone, fat, tendons, skin, muscles, blood, and nerves. The most severe tissue injury usually occurs at the skin sites where the current enters and leaves the body (Fig. 5.5). After electricity has penetrated the skin, it passes rapidly through the body along the lines of least resistance—through body fluids and nerves. Degeneration of vessel walls may occur, and thrombi may form as current flows along the blood vessels. This can cause extensive muscle and deep tissue injury. Thick, dry skin is more resistant to the flow of electricity than thin, wet skin. It is generally believed that the greater the skin resistance, the greater is the amount of local skin burn, and the less the resistance, the greater are the deep and systemic effects. 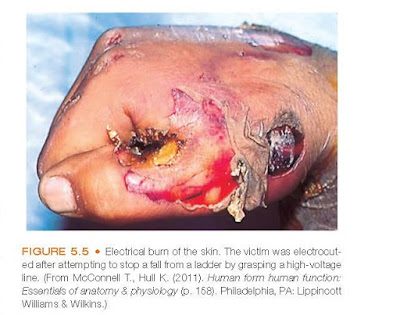 Radiation Injury
Electromagnetic radiation comprises a wide spectrum of wave-propagated energy, ranging from ionizing gamma rays to radiofrequency waves (Fig. 5.6). A photon is a particle of radiation energy. Radiation energy above the ultraviolet (UV) range is called ionizing radiation because the photons have enough energy to knock electrons off atoms and molecules. Nonionizing radiation refers to radiation energy at frequencies below those of visible light. UV radiation represents the portion of the spectrum of electromagnetic radiation just above the visible range. It contains increasingly energetic rays that are powerful enough to disrupt intracellular bonds and cause sunburn.

Ionizing Radiation. Ionizing radiation impacts cells by causing ionization of molecules and atoms in the cell. This is accomplished by releasing free radicals that destroy cells and by directly hitting the target molecules in the cell.16 It can immediately kill cells, interrupt cell replication, or cause a variety of genetic mutations, which may or may not be lethal. Most radiation injury is caused by localized irradiation that is used in the treatment of cancer. Except for unusual circumstances such as the use of high-dose irradiation that precedes bone marrow transplantation, exposure to whole-body irradiation is rare.
The injurious effects of ionizing radiation vary with the dose, dose rate (a single dose can cause greater injury than divided or fractionated doses), and the differential sensitivity of the exposed tissue to radiation injury. Because of the effect on deoxyribonucleic acid (DNA) synthesis and interference with mitosis, rapidly dividing cells of the bone marrow and intestine are much more vulnerable to radiation injury than tissues such as bone and skeletal muscle. Over time, occupational and accidental exposure to ionizing radiation can result in increased risk for the development of various types of cancers, including skin cancers, leukemia, osteogenic sarcomas, and lung cancer. This is especially true when the person is exposed to radiation during childhood.
Many of the clinical manifestations of radiation injury result from acute cell injury, dose-dependent changes in the blood vessels that supply the irradiated tissues, and fibrotic tissue replacement. The cell’s initial response to radiation injury involves swelling, disruption of the mitochondria and other organelles, alterations in the cell membrane, and marked changes in the nucleus. The endothelial cells in blood vessels are particularly sensitive to irradiation. During the immediate postirradiation period, only vessel dilatation is apparent (e.g., the initial erythema of the skin after radiation therapy). Later or with higher levels of radiation, destructive changes occur in small blood vessels such as the capillaries and venules. Acute small blood vessels such as the capillaries and venules. Acute reversible necrosis is represented by such disorders as radiation cystitis, dermatitis, and diarrhea from enteritis. More persistent damage can be attributed to acute necrosis of tissue cells that are not capable of regeneration and chronic ischemia. Chronic effects of radiation damage are characterized by fibrosis and scarring of tissues and organs in the irradiated area (e.g., interstitial fibrosis of the heart and lungs after irradiation of the chest). Because the radiation delivered in radiation therapy inevitably travels through the skin, radiation dermatitis is common. There may be necrosis of the skin, impaired wound healing, and chronic radiation dermatitis.

Ultraviolet Radiation. Ultraviolet radiation causes sun-burn and increases the risk of skin cancers. The degree of risk depends on the type of UV rays, the intensity of exposure, and the amount of protective melanin pigment in the skin. Skin damage produced by UV radiation is thought to be caused by reactive oxygen species (ROS) and by damage to melanin-producing processes in the skin.18  UV radiation also damages DNA, resulting in the formation of pyrimidine dimers (i.e., the insertion of two identical pyrimidine bases into replicating DNA instead of one). Other forms of DNA damage include the production of single-stranded breaks and formation of DNA–protein cross-links. Normally errors that occur during DNA replication are repaired by enzymes that remove the faulty section of DNA and repair the damage. The importance of DNA repair in protecting against UV radiation injury is evidenced by the vulnerability of people who lack the enzymes needed to repair UV-induced DNA damage. In a genetic disorder called xeroderma pigmentosum, an enzyme needed to repair sunlight-induced DNA damage is lacking. This autosomal recessive disorder is characterized by extreme photosensitivity and an increased risk of skin cancer in sunexposed skin.
Nonionizing Radiation. Nonionizing radiation includes infrared light, ultrasound, microwaves, and laser energy. Unlike ionizing radiation, which can directly break chemical bonds, nonionizing radiation exerts its effects by causing vibration and rotation of atoms and molecules.  All of this vibrational and rotational energy is eventually converted to thermal energy. Low-frequency nonionizing radiation is used widely in radar, television, industrial operations (e.g., heating, welding, melting of metals, processing of wood and plastic), household appliances (e.g., microwave ovens), and medical applications (e.g., diathermy). Isolated cases of skin burns and thermal injury to deeper tissues have occurred in industrial settings and from improperly used household microwave ovens. Injury from these sources is mainly thermal and, because of the deep penetration of the infrared or microwave rays, tends to involve dermal and subcutaneous tissue injury.
Chemical Injury

Mercury Toxicity. Mercury has been used for industrial and medical purposes for hundreds of years. Mercury is toxic, and the hazards of mercury-associated occupational and accidental exposures are well known. Currently  mercury and lead are the most toxic metals. Mercury is toxic in four primary forms: mercury vapor, inorganic divalent mercury, methyl mercury, and ethyl mercury. Depending on the form of mercury exposure, toxicity involving the central nervous system and kidney can occur.
In the case of dental fillings, the concern involves mercury vapor being released into the mouth. However, the amount of mercury vapor released from fillings is very small. The main source of methyl mercury exposure is from consumption of long-lived fish, such as tuna and swordfish. Fish concentrate mercury from sediment in the water. Only certain types of fish pose potential risk, however, and types such as salmon have miniscule amounts or no mercury. Because the developing brain is more susceptible to mercury-induced damage, it is recommended that young children and pregnant and nursing women avoid consumption of fish known to contain high mercury content. Thimerosal is an ethyl mercury–containing preservative that helps prevent microorganism growth in vaccines. Due to the concern of this preservative, it is hardly ever used in the United States.

Related Posts
Health
Home
Give us your opinion