The Cell Cycle
Is an orderly sequence of events that occur as a cell duplicates its contents and divides (Fig. 8.1). During the cell cycle, genetic information is duplicated and the duplicated chromosomes are appropriately aligned for distribution between two genetically identical daughter cells. 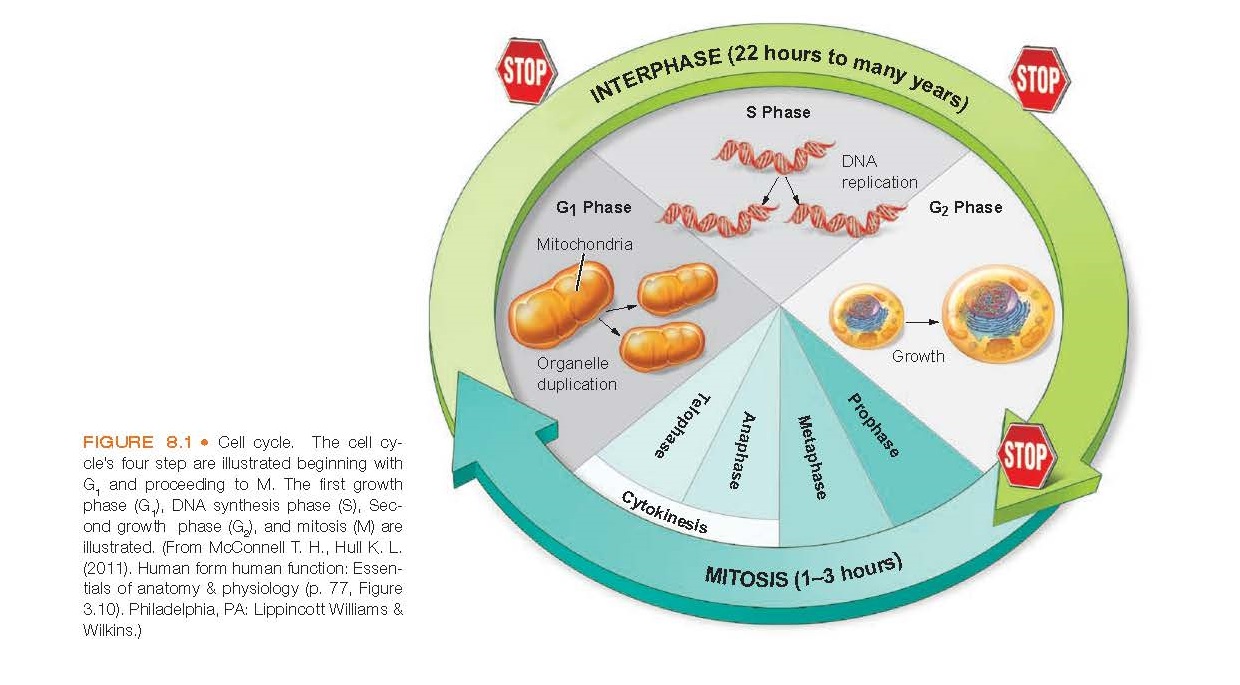 The cell cycle is divided into four phases, referred to as G1 , S, G2 , and M. G1 (gap 1) occurs after the postmitosis phase when DNA synthesis stops and ribonucleic acid (RNA) and protein synthesis and cell growth take place. During the S phase, DNA synthesis occurs, causing two separate sets of chromosomes to develop, one for each daughter cell. G2 (gap 2) is the premitotic phase and is similar to G1 in that DNA synthesis stops, but RNA and protein synthesis continue. The phases, G1 , S, and G2 are referred to as interphase. The M phase is the phase of nuclear division, or mitosis, and cytoplasmic division. Continually dividing cells, such as the skin’s stratified squamous epithelium, continue to cycle from one mitotic division to the next. When environmental conditions are adverse, such as nutrient or growth factor unavailability, or when cells are highly specialized, cells may leave the cell cycle, becoming mitotically quiescent, and reside in a resting state known as G0 . Cells in G0 may reenter the cell cycle in response to extracellular nutrients, growth factors, hormones, and other signals such as blood loss or tissue injury that trigger cell growth. Highly specialized and terminally differentiated cells, such as neurons, may permanently stay in G0.
Within the cell cycle, pauses can be made if the specific events of the cell cycle phases have not been completed. For example, mitosis is prevented until DNA is properly replicated.
In addition, chromosome separation in mitosis is delayed until all spindle fibers have attached to the chromosomes. These are opportunities for checking the accuracy of DNA replication. These DNA damage checkpoints allow for any defects to be identified and repaired, thereby ensuring that each daughter cell receives a full complement of genetic information, identical to that of the parent cell.
The cyclins are a group of proteins that control the entry and progression of cells through the cell cycle. Cyclins bind to proteins called cyclin-dependent kinases (CDKs). Kinases are enzymes that phosphorylate proteins. The CDKs phosphorylate specific target proteins and are expressed continuously during the cell cycle but in an inactive form, whereas the cyclins are synthesized during specific phases of the cell cycle and then degraded by ubiquitination once their task is completed. Different arrangements of cyclins and CDKs are associated with each stage of the cell cycle (Fig. 8.2). For example, cyclin B and CDK1 control the transition from G2 to M. As the cell moves into G2, cyclin B is synthesized and binds to CDK1. The cyclin B–CDK1 complex then directs the events leading to mitosis, including DNA replication and assembly of the mitotic spindle. Although each phase of the cell cycle is monitored carefully, the transition from G2 to M is considered to be one of the most important checkpoints in the cell cycle. In addition to the synthesis and degradation of the cyclins, the cyclin–CDK complexes are regulated by the binding of CDK inhibitors (CKIs). The CKIs are particularly important in regulating cell cycle checkpoints during which mistakes in DNA replication are repaired. Manipulation of cyclins, CDKs, and CKIs is the basis for development of newer forms of drug therapy that can be used in cancer treatment. 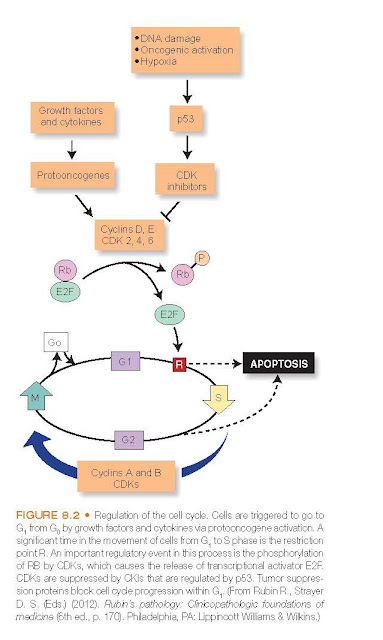 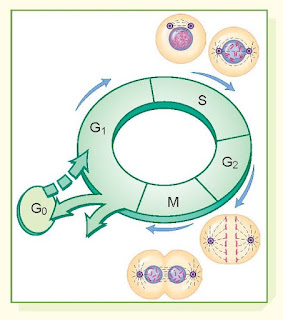 Gaps 1 and 2
Because most cells require time to grow and double their mass of proteins and organelles, extra gaps (G) are inserted into the cell cycle. G1 is the stage during which the cell is starting to prepare for DNA replication and mitosis through protein synthesis and an increase in organelle and cytoskeletal elements. G2 is the premitotic phase. During this phase, enzymes and other proteins needed for cell division are synthesized and moved to their proper sites. 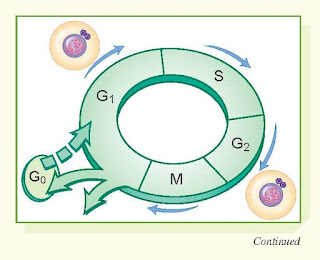 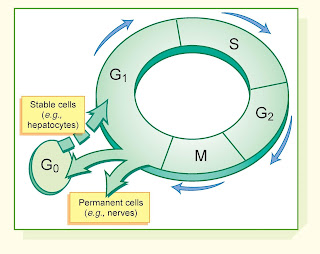 Checkpoints and Cyclins
In most cells, there are several checkpoints in the cell cycle, at which time the cycle can be arrested if previous events have not been completed. For example, the G1/S checkpoint monitors whether the DNA in the chromosomes is damaged by radiation or chemicals, and the G2/M checkpoint prevents entry into mitosis if DNA replication is not complete. The cyclins are a family of proteins that control entry and progression of cells through the cell cycle. They function by activating proteins called CDKs. Different combinations of cyclins and CDKs are associated with each stage of the cell cycle. In addition to the synthesis and degradation of the cyclins, the cyclin–CDK complexes are regulated by the binding of CKIs. The CDK inhibitors are particularly important in regulating cell cycle checkpoints during which mistakes in DNA replication are repaired. 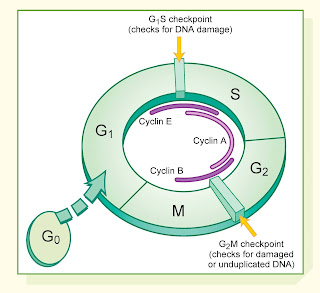