Antigen  Antibody Interaction And Immune Complexes
An antigen, by definition, stimulates the production of antibody, which in turn combines with the antigen. Both processes are based on complementarity (or ‘fit’) between two shapes – a small piece of the antigen (or determinant) and the combining site of the antibody, a cleft formed largely by the hypervariable regions of heavy and light chains (see Fig. 14). The closer the fit between this site and the antigenic determinant, the stronger the non-covalent forces (hydrophobic, electrostatic, etc., lower left) between them and the higher the affinity (top left). When both combining sites can interact with the same antigen (e.g. on a cell), the bond has a greatly increased strength, which in this case is referred to as ‘avidity’ (see Fig. 14). 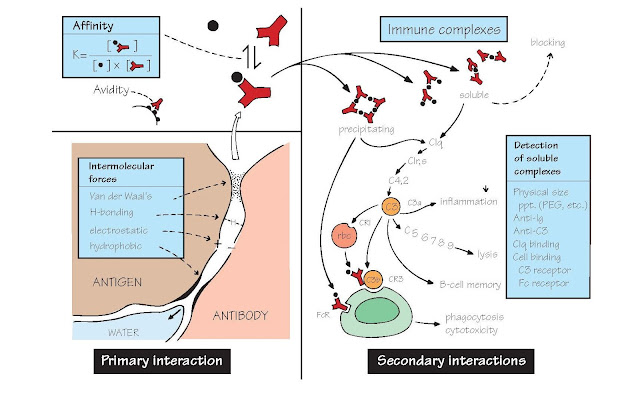 The ability of a particular antibody to combine with one determinant rather than another is referred to as specificity. The antibody repertoire of an animal, stored in its V genes and expanded further by mutation (see Fig. 13), is expressed as the number of different shapes towards which a complementary specific antibody molecule can be made, and runs into millions.
What happens when antigen and antibody combine depends on the circumstances. Sometimes antibody alone is enough to neutralize the antigen. This is the case for toxins (such as tetanus or diphtheria) or microorganisms such as viruses that need to attach to cell-surface receptors in order to gain entry (the ability to block entry is often called neutralization).
Usually, however, a secondary interaction of the antibody molecule with another effector agent, such as complement or phagocytic cells, is required to dispose of the antigen. The importance of these secondary interactions is shown by the fact that deficiency of complement or myeloid cells can be almost as serious as deficiency of antibody itself (see Fig. 33).
The combination of antigen and antibody is called an immune complex; this may be small (soluble) or large (precipitating), depending on the nature and proportions of antigen and antibody (top right). The usual fate of complexes is to be removed by phagocytic cells, through the interaction of the Fc portion of the antibody with complement and with cell-surface receptors (bottom centre and see Figs 6 and 9). However, in some cases complexes may persist in circulation and cause inflammatory damage to organs (see Fig. 36) or inhibit useful immunity, e.g. to tumours or parasites.


The combining site of antibody is a cleft roughly 3 × 1 × 1 nm (the size of five or six sugar units), although there is evidence that antigens may bind to larger, or even separate, parts of the variable region. Binding depends on a close three-dimensional fit, allowing weak inter- molecular forces to overcome the normal repulsion between molecules. Although binding between antigen and antibody involves only non-covalent forces, and therefore is theoretically reversible, in practice the high affinity of most antibodies means that they rarely become detached from their targets before these are destroyed.
Van der Waal’s forces attract all molecules through their electron clouds, but only act at extremely close range.
Hydrogen bonding (e.g. between NH2 and OH groups) is another weak force.
Electrostatic attraction between parts of an antibody and antigen molecule with a net opposite charge (e.g. a negatively charged carboxyl group and a positively charged ammonium group) is sometimes quite strong.
Hydrophobic regions on antigen and antibody will tend to be attracted in an aqueous environment; this is probably the strongest force between them.
Affinity is normally expressed as the association constant under equi- librium conditions. A value of 105 L/mol would be considered low, while high-affinity antibody can reach 1010 L/mol and more, several orders of magnitude higher than most enzyme – substrate interactions. In practice, it is often avidity that is measured because antibodies have (at least) two valencies, and even with monovalent antigens a serum can only be assigned an average affinity. Average affinity tends to increase with time after antigenic stimulation, partly through cell selection by diminishing amounts of antigen, and partly via somatic mutation of Ig genes. High-affinity antibodies are more effective in most cases, but low-affinity antibodies persist too, and may have certain advantages (reusability, resistance to tolerance?).
Antigen It is remarkable that the process of making antibodies is so versatile that one can find antibodies  specific  for  almost  any type of molecular surface. These include the common components of pathogens such as proteins, nucleic acids, sugars and lipids, but also man-made synthetic molecules. For example,  antibodies against amphetamines are being developed for the treatment of drug addiction.

Immune complexes
Under conditions of antigen or antibody excess, small (‘soluble’) complexes tend to predominate, but with roughly equivalent amounts of antigen and antibody, precipitates form, probably by lattice formation. Such precipitates activate the inflammatory response and probably underlie some types of occupational allergies, such as ‘Farmer’s lung’ (see Figs 35 and 36). Complexes between antibodies and large antigens (e.g. nucleic acids) are associated with systemic autoimmune diseases such as systemic lupus erythematosus (SLE; see Fig. 38). In the presence of complement (i.e. in fresh serum) only small complexes are formed; in fact C3 can actually solubilize larger complexes (see also Fig. 36) and SLE is commonly associated with C2 and C4 deficiency.
Blocking of T-cell or antibody-mediated killing by complexes in (respectively) antigen or antibody excess may account for some of the unresponsiveness to tumours or parasite infections.
C1q the first component of complement, binds to the Fc portion of complexed antibody, possibly under the influence of a conformational change in the shape of the Ig molecule, although some workers hold that occupation of both combining sites (i.e. of IgG) is all that is needed. Activation of the ‘classic’ complement pathway follows.
Inflammation Breakdown products of C3 and C5, through interaction with mast cells, polymorphs, etc., are responsible for the vascular damage that is a feature of ‘immune complex diseases’ (see Fig. 36).
Lysis (e.g. of bacteria) requires the complete complement sequence. Sometimes the C567 unit moves away from the original site of anti- body binding, activates C8 and 9, and causes lysis of innocent cells, (e.g. red cells); this is known as ‘reactive lysis’.
Phagocytosis by macrophages, polymorphs, eosinophils, etc. is the normal fate of large complexes. In general, the antibody classes and subclasses that bind to Fc receptors also bind to complement, making them strongly opsonic, but the Fc and C3 receptors are quite distinct; IgM, for example, binds to complement much more than to cells. The majority of complexes in the circulation are picked up by red blood cells (rbc in figure) via their complement receptors (see Fig. 6). In transit through the liver and spleen, the complexes are removed by phagocytic cells.

Fc receptors (FcR) There are several types of receptor that bind the Fc constant part of antibodies. Some are found on phagocytes and facilitate uptake of IgG opsonized bacteria (see Fig. 9). Others are present on mast cells, and bind IgE. The interaction of IgE and specific antigen then triggers mast cell degranulation and allergic reactions (see Fig. 35). A different Fc receptor on B cells binds antibody – anigen complexes and acts to switch off further antibody production.
Cytotoxicity When antibody bound to a cell or microorganism makes contact with Fc receptors, the result may be killing rather than phagocytosis. Cells able to do this include macrophages, monocytes, neutrophils, eosinophils and natural killer cells (see Fig. 12).
B-cell memory Complement receptors on the follicular dendritic cells (see Fig. 19) help them to retain immune complexes and present the antigen to B cells in a way that, by selecting for mutants with high binding affinity, encourages the increase or ‘maturation’ of the affinity of the antibody response as a whole.