Anatomy And Histology Of The Heart


Anatomy And Histology Of The Heart
Anatomy of the heart (Figure 2a)
The heart consists of four chambers. Blood flows into the right atrium via the superior and inferior venae cavae. The left and right atria connect to the ventricles via the mitral (two cusps) and tricuspid (three cusps) atrioventricular (AV) valves, respectively. The AV valves are passive and close when the ventricular pressure exceeds that in the atrium. They are prevented from being everted into the atria during systole by fine cords (chordae tendineae) attached between the free margins of the cusps and the papillary muscles, which contract during systole. The outflow from the right ventricle passes through the pulmonary semilunar valve to the pulmonary artery, and that from the left ventricle enters the aorta via the aortic semilunar valve. These valves close passively at the end of systole, when ventricular pressure falls below that of the arteries. Both semilunar valves have three cusps.


The cusps or leaflets of the cardiac valves are formed of fibrous connective tissue, covered in a thin layer of cells similar to and contiguous with the endocardium (AV valves and ventricular surface of semilunar valves) and endothelium (vascular side of semilunar valves). When closed, the cusps form a tight seal (come to apposition) at the commissures (line at which the edges of the leaflets meet).
The atria and ventricles are separated by a band of fibrous connective tissue called the annulus fibrosus, which provides a skeleton for attachment of the muscle and insertion of the valves. It also prevents electrical conduction between the atria and ventricles except at the atrioventricular node (AVN). This is situated near the interatrial septum and the mouth of the coronary sinus and is an important element of the cardiac electrical conduction system (see Chapter 13).
The ventricles fill during diastole; at the initiation of the heart beat the atria contract and complete ventricular filling. As the ventricles contract the pressure rises sharply, closing the AV valves. When ventricular pressure exceeds the pulmonary artery or aortic pressure, the semilunar valves open and ejection occurs (see Chapter 16). As systole ends and ventricular pressure falls, the semilunar valves are closed by backflow of blood from the arteries.
The force of contraction is generated by the muscle of the heart, the myocardium. The atrial walls are thin. The greater pressure generated by the left ventricle compared with the right is reflected by its greater wall thickness. The inside of the heart is covered in a thin layer of cells called the endocardium, which is similar to the endothelium of blood vessels. The outer surface of the myocardium is covered by the epicardium, a layer of mesothelial cells. The whole heart is enclosed in the pericardium, a thin fibrous sheath or sac, which prevents excessive enlargement. The pericardial space contains interstitial fluid as a lubricant. 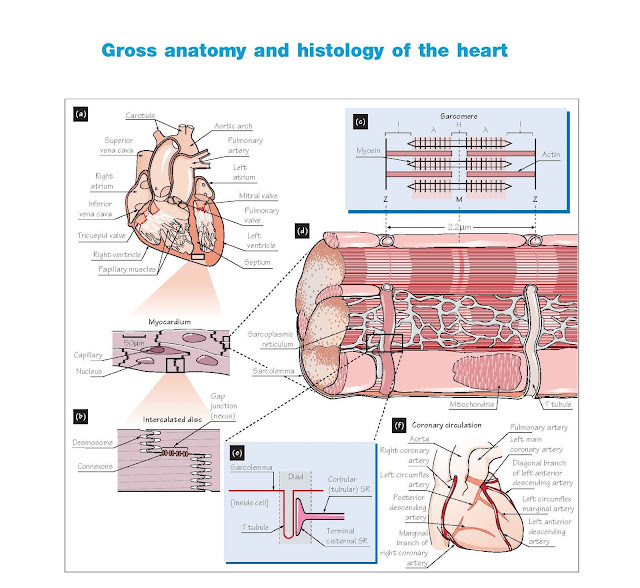 Structure of the myocardium
The myocardium consists of cardiac myocytes (muscle cells) that show a striated subcellular structure, although they are less organized thanskeletal muscle. The cells are relatively small (100 × 20 µm) and branched, with a single nucleus, and are rich in mitochondria. They are connected together as a network by intercalated discs
(Figure 2b), where the cell membranes are closely opposed. The intercalated discs provide both a structural attachment by ‘glueing’ the cells together at desmosomes, and an electrical connection through gap junctions formed of pores made up of proteins called connexons. As a result, the myocardium acts as a functional syncytium, in other words as a single functional unit, even though the individual cells are still separate. The gap junctions play a vital part in conduction of the electrical impulse through the myocardium (see Chapter 13).
The myocytes contain actin and myosin filaments which form the contractile apparatus, and exhibit the classic M and Z lines and A, H and I bands (Figure 2c). The intercalated discs always coincide with a Z line, as it is here that the actin filaments are anchored to the cytoskeleton. At the Z lines the sarcolemma (cell membrane) forms tubular invaginations into the cells known as the transverse (T) tubular system. The sarcoplasmic reticulum (SR) is less extensive than in skeletal muscle, and runs generally in parallel with the length of the cell (Figure 2d). Close to the T tubules the SR forms terminal cisternae that with the T tubule make up diads (Figure 2e), an important component of excitation– contraction coupling (see Chapter 12). The typical triad seen in skeletal muscle is less often present. The T tubules and SR never physically join, but are separated by a narrow gap. The myocardium has an extensive system of capillaries.

Coronary circulation (Figure 2f)
The heart has a rich blood supply, derived from the left and right coronary arteries. These arise separately from the aortic sinus at the base of the aorta, behind the cusps of the aortic valve. They are not blocked by the cusps during systole because of eddy cur- rents, and remain patent throughout the cardiac cycle. The right coronary artery runs forward between the pulmonary trunk and right atrium, to the AV sulcus. As it descends to the lower margin of the heart, it divides to posterior descending and right marginal branches. The left coronary artery runs behind the pulmonary trunk and forward between it and the left atrium. It divides into the circumflex, left marginal and anterior descending branches. There are anastomoses between the left and right marginal branches, and the anterior and posterior descending arteries, although these are not sufficient to maintain perfusion if one side of the coronary circulation is occluded.
Most of the blood returns to the right atrium via the coronary sinus, and anterior cardiac veins. The large and small coronary veins run parallel to the left and right coronary arteries, respectively, and empty into the sinus. Numerous other small vessels empty into the cardiac chambers directly, including thebesian veins and arteriosinusoidal vessels.
The coronary circulation is capable of developing a good collateral system in ischaemic heart disease, when a branch or branches are occluded by, for example, atheromatous plaques. Most of the left ventricle is supplied by the left coronary artery, and occlusion can therefore be very dangerous. The AVN and sinus node are supplied by the right coronary artery in the majority of people; disease in this artery can cause a slow heart rate and k (see Chapters 13 and 14).