Pressures And Volumes During Normal Breathing 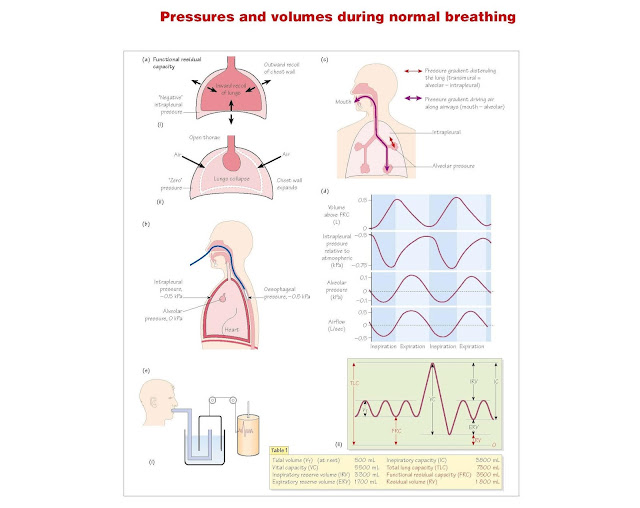 Lung volumes
If a subject breathes in and out of a simple water-ﬁlled spirometer (Fig. 3e(i)), the drum falls and rises and the pen, attached by a pulley system, produces a trace (Fig. 3e(ii)) which illustrates the important lung volumes. Conventionally, volumes composed of two or more volumes are known as 'capacities', whereas those that cannot be subdivided are known as 'volumes'. The volume breathed in (or out) is known as the tidal volume, and the trace shows several resting tidal volumes, which are typically about 500 mL. At the end of a normal quiet inspiration, the subject could breathe in more and this is the inspiratory reserve volume (IRV). Similarly, the volume that he or she could exhale after a normal expiration is the expiratory reserve volume (ERV). For the fourth breath, the subject breathes in and out as fully as possible. This maximum tidal volume is the vital capacity (VC= VT +IRV+ERV). At the end of a maximal breath out, the volume remaining in the lungs is the residual volume. FRC and total lung capacity are the volumes in the lungs at the end of a normal expiration and after a maximal breath in, respectively. Possible values for a man are given in Table 1. Although a zero volume line is shown (Fig. 3e(ii)), it is not possible to know where this actually is on a trace, because the subject cannot empty the lungs into the drum. For this reason, although illustrated in Fig. 3e(ii), volumes shown in red in Table 1 cannot be measured from a simple spirometer trace. They can be measured using helium dilution or body plethysmography (Chapter 20). The range of normal lung volumes is large and an individual's volumes must be assessed with the aid of nomograms that give the predicted value of for the subject's age, sex and height.