Vascular Anatomy
The blood vessels of the cardiovascular system are for convenience of description classified into arteries (elastic and muscular), resistance vessels (small arteries and arterioles), capillaries, venules and veins. Typical dimensions for the different types of vessel are illustrated. 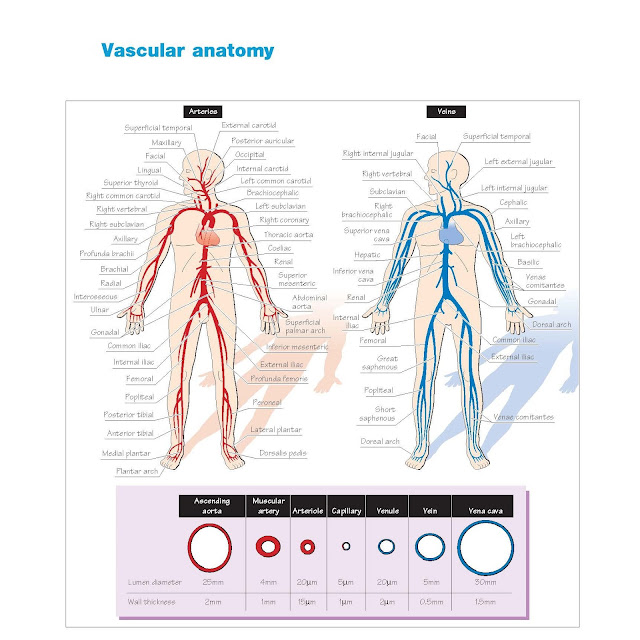 The systemic circulation
Arteries
The systemic (or greater) circulation begins with the pumping of blood by the left ventricle into the largest artery, the aorta. This ascends from the top of the heart, bends downward at the aortic arch and descends just anterior to the spinal column. The aorta bifurcates into the left and right iliac arteries, which supply the pelvis and legs. The major arteries supplying the head, the arms and the heart arise from the aortic arch, and the main arteries supplying the visceral organs branch from the descending aorta. All of the major organs except the liver (see below) are therefore supplied with blood by arteries that arise from the aorta. The fundamentally parallel organization of the systemic vasculature has a number of advantages over the alternative series arrangement, in which blood would flow sequentially through one organ after another. The parallel arrangement of the vascular system ensures that the supply of blood to each organ is relatively independent, is driven by a large pressure head, and also that each organ receives highly oxygenated blood.
The aorta and its major branches (brachiocephalic, common carotid, subclavian and common iliac arteries) are termed elastic arteries. In addition to conducting blood away from the heart, these arteries distend during systole and recoil during diastole, damping the pulse wave and evening out the discontinuous flow of blood created by the heart’s intermittent pumping action.
Elastic arteries branch to give rise to muscular arteries with relatively thicker walls; this prevents their collapse when joints bend. The muscular arteries give rise to resistance vessels, so named because they present the greatest part of the resistance of the vasculature to the flow of blood. These are sometimes subclassified into small arteries, which have multiple layers of smooth muscle cells in their walls, and arterioles, which have one or two layers of smooth muscle cells. Resistance vessels have the highest wall to lumen ratio in the vasculature. The degree of constriction or tone of these vessels regulates the amount of blood flowing to each small area of tissue. All but the smallest resistance vessels tend to be heavily innervated (especially in the splanchnic, renal and cutaneous vasculatures) by the sympathetic nervous system, the activity of which usually causes them to constrict (see Chapter 28).

Arterial anastomoses
In addition to branching to give rise to smaller vessels, arteries and arterioles may also merge to form anastomoses. These are found in many circulations (e.g. the brain, mesentery, uterus, around joints) and provide an alternative supply of blood if one artery is blocked. If this occurs, the anastamosing artery gradually enlarges, providing a collateral circulation.
The smallest arterioles, capillaries and postcapillary venules comprise the microcirculation, the structure and function of which is described in Chapters 20 and 21.
Veins
The venous system can be divided into the venules, which contain one or two layers of smooth muscle cells, and the veins. The veins of the limbs, particularly the legs, contain paired semilunar valves which ensure that the blood cannot move backwards. These are orientated so that they are pressed against the venous wall when the blood is flowing forward, but are forced out to occlude the lumen when the blood flow reverses.
The veins from the head, neck and arms come together to form the superior vena cava, and those from the lower part of the body merge into the inferior vena cava. These deliver blood to the right atrium, which pumps it into the right ventricle.
The one or two veins draining a body region typically run next to the artery supplying that region. This promotes heat conservation, because at low temperatures the warmer arterial blood gives up its heat to the cooler venous blood, rather than to the external environment. The pulsations of the artery caused by the heart beat also aid the venous flow of blood.

The splanchnic circulation
The arrangement of the splanchnic circulation (liver and digestive organs) is a partial exception to the parallel organization of the systemic vasculature (see Figure 1). Although a fraction of the blood supply to the liver is provided by the hepatic artery, the liver receives most (approximately 70%) of its blood via the portal vein. This vessel carries venous blood that has passed through the capillary beds of the stomach, spleen, pancreas and intestine. Most of the liver’s circulation is therefore in series with that of the digestive organs. This arrangement facilitates hepatic uptake of nutrients and detoxification of foreign substances that have been absorbed during digestion. This type of sequential perfusion of two capillary beds is referred to as a portal circulation. A somewhat different type of portal circulation is also found within the kidney.