Control Of Cardiac Output
Cardiac output (CO) is stroke volume (SV) × heart rate (HR), and at rest ∼5 L/min; during strenuous exercise this can rise to >25 L/ min. SV is influenced by the filling pressure (preload), cardiac muscle force, and pressure against which the heart has to pump (afterload), which are all modulated by the autonomic nervous system (ANS) (Figure 17a). The heart and vasculature are in series and interdependent; except for transient differences venous return must equal CO.

Ventricular function curves
The volume of blood in the ventricle at the start of systole (end- diastolic volume, EDV) depends on the end-diastolic pressure (EDP) and compliance of the ventricular wall (how easy it is to inflate). Right ventricular (RV) EDP is dependent on right atrial and thus central venous pressure (CVP). If EDP (and so EDV) is increased, the force of the following contraction, and thus SV, increases (Figure 17b). This is known as the Frank–Starling relationship, and the graph relating SV to EDP is the ventricular function curve. The force of contraction is dependent on muscle stretch, and Star- ling’s law of the heart states ‘The energy released during contraction depends on the initial fibre length.’
As muscle is stretched, more myosin crossbridges can form, increasing force. Cardiac muscle has a steeper relationship between stretch and force than skeletal muscle, because in the heart stretch also increases Ca2+ binding to troponin C (see Chapter 12). The function curve is therefore steep, so small changes in EDP can lead to large increases in SV and CO (Figure 17b). 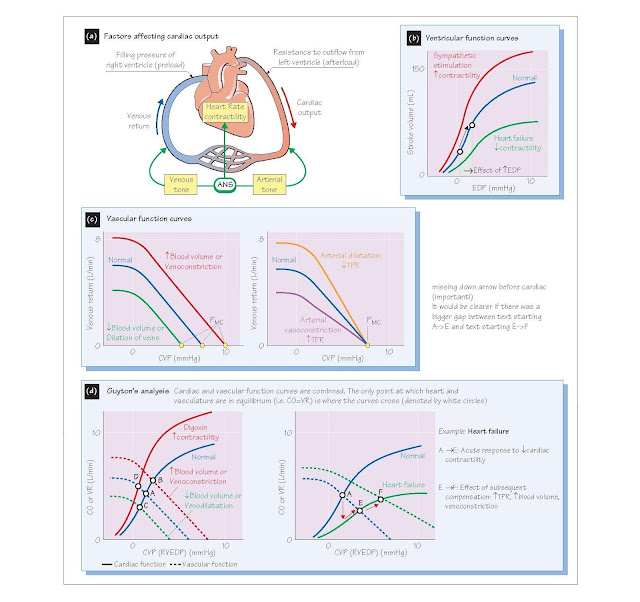 Role of Starling’s law
The most important consequence of Starling’s law is that output is matched between right and left ventricles. If, for example, RV SV increases, the amount of blood in the lungs and thus pulmonary vascular pressure must also increase. As the latter determines left ventricular (LV) EDP, LV SV increases due to Starling’s law, until it again matches RV SV when input to and output from the lungs equalize and the pressure stops rising. This represents a rightward shift along the function curve (Figure 17b). Starling’s law thus explains how CVP, although only perceived by the RV, also influences LV function and CO, and why postural hypotension and haemorrhage reduce CO. It also allows the heart to sustain output when afterload is increased (hypertension, valve stenosis) or contractility reduced (e.g. heart failure; Figure 17b; see Chapter 46), as both lead to accumulation of venous blood and a raised EDP, which increases ventricular force and restores SV. Note that any increase in LV EDP represents an increase in RV afterload, so for the same reasons CVP may also rise (Figure 17d). As EDV is necessarily increased in the above cases, ejection fraction (SV/ EDV) will be reduced; a greatly reduced ejection fraction and enlarged heart (high EDV) are diagnostic for systolic heart failure (see Chapter 46).

The autonomic nervous system
The ANS strongly influences CO, and is central to control of blood pressure (see Chapters 27 and 28). Sympathetic stimulation increases heart rate and cardiac muscle force (see Chapters 11 and 12). Force is increased without any change in EDP (i.e. increased stretch), so that the function curve is shifted upwards (Figure 17b). This is called an increase in contractility, and agents that affect contractility are called inotropes (see Chapter 12). Parasympathetic stimulation slows the heart but does not decrease contractility, as ventricular parasympathetic innervation is sparse.
Activation of sympathetic nerves also causes arterial and venous vasoconstriction (see Chapter 28). An important but often over- looked point is that these differ in effect. Arterial vasoconstriction increases total peripheral resistance (TPR) and thus reduces flow, so downstream pressure and venous return will fall. However, the veins contain ∼70% of the blood volume at low pressure and are highly compliant (stretch easily). Venoconstriction does not significantly impede flow because their resistance is low compared to arteries, but it reduces their compliance and hence capacity (amount of blood they contain). Thus, venoconstriction has the same effect as increasing blood volume, and increases CVP. Sympathetic stimulation can thus increase CO by increasing heart rate, contractility and CVP.

Vascular function curves and Guyton’s analysis
The vascular function curve depicts the relationship between venous return and CVP (Figure 17c). Blood flow is driven by the arterial–venous pressure difference, so venous return will be impeded by a rise in CVP. If the heart stops, pressure will equalize between the arterial and venous circulations (mean circulatory pressure, PMC), which depends on the volume and compliance of the vasculature, primarily the veins (see above). By definition CVP equals PMC when venous return (i.e. CO) is zero. The curve levels off at negative CVP due to venous collapse. Raising blood volume or venoconstriction increases PMC and so causes a parallel shift of the curve to the right, whereas blood loss does the reverse. Arterial vasoconstriction and an increase in TPR on the other hand reduces blood flow and venous return at any CVP (see above), but as resistance arteries contain little of the blood volume, and the decrease in diameter required to increase their resistance is small (see Chapter 18), there is an insignificant change in vascular volume or PMC. Thus, the net effect is to reduce the slope of the curve. A reduction in TPR does the opposite.
Guyton’s analysis helps us to understand the integrated function of the cardiovascular system by combining vascular and cardiac function curves into one graph (Figure 17d). The cardiac function curve is now shown as CO plotted against CVP (i.e. RV EDP). The only point at which CO and venous return are equal, and so the only point where the system is in equilibrium, is where the two function curves cross (A), the equilibrium (or operating) point. Thus, increasing blood volume or venoconstriction shifts the equilibrium point (B) and CO and CVP are both increased. Blood loss or venous dilatation do the opposite (C), which is why nitrovasodilators, which primarily dilate veins, reduce cardiac work (see Chapter 41). Positive inotropes (e.g. digoxin) increase cardiac contractility and shift the cardiac function curve upwards. At equilibrium (D) CO is thus increased but CVP reduced, explaining why digoxin reduces symptoms in heart failure (but not survival; see Chapter 46). Analysis of heart failure is illuminating. The initial fall in CO is limited by an elevated CVP (Figure 17d, E; see Starling’s law above). Central mechanisms mediated via the ANS then provide further compensation against a fall in blood pressure, by increasing TPR, venoconstriction and renal retention of salt and water (see Chapter 46). Combined, these raise and flatten the vascular function curve (see above), so at equilibrium CO may be largely restored, but at the expense of a greatly increased CVP (F).