Kidney: Position And Relations
Position And Shape
The kidneys are paired retroperitoneal organs that lie lateral to the upper lumbar vertebrae. In the relaxed, supine position, their superior poles are level with the twelfth thoracic vertebra, while their inferior poles are level with the third lumbar vertebra and about 2.5 cm superior to the iliac crest. On deep inspiration in the erect position, however, both kidneys may descend near or even past the iliac crest. Usually the right kidney lies 1 to 2 cm inferior to the left kidney because its developmental ascent is blocked by the liver.


Most commonly, both kidneys are surrounded by a variable amount of retroperitoneal fat (see Plate 1-5); as in most anatomic descriptions, however, this fat is not considered in the relational descriptions that follow. Both kidneys lie in close proximity to the abdominal aorta and inferior vena cava. These major vessels extend branches to each kidney that enter at a notched, medially located area of the parenchyma known as the hilum. At the level of the kidneys, the abdominal aorta lies directly anterior to the vertebral column, passing about 2.5 cm anteromedial to the left kidney. The inferior vena cava lies to the right of the aorta, nearly touching the medial aspect of the right kidney. Both kidneys are rotated so that their medial surfaces are slightly anterior, facilitating their connection to these major vessels. 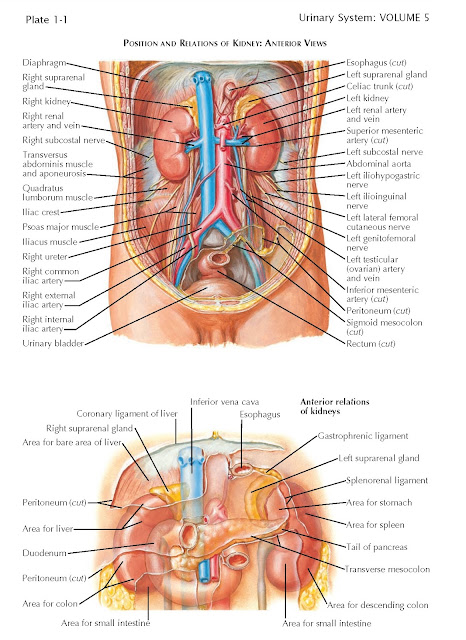 The suprarenal glands, historically referred to as “adrenal” (a misnomer that incorrectly implied a sub- servient relationship to the kidneys), are bilateral glands typically related to the superomedial aspects of the kidneys but not attached to them. They are attached to the diaphragmatic crura, a relationship maintained in the presence of nephroptosis (“dropped kidneys”). Like the kidneys, the suprarenal glands are surrounded by a variable amount of fat. The crescentic left supra-renal gland lies medial to the upper third of the kidney, extending from the apex to the hilum. The pyramidal right suprarenal gland sits caplike on the superior pole of the right kidney.
The anterior relations of the left and right kidneys differ, reﬂecting their associations with the various unpaired organs that constitute the abdominal viscera. The posterior relations of both kidneys are similar, reﬂecting their associations with the paired muscles of the posterior abdominal wall.

Anterior Relations
Kidney development occurs in the retroperitoneal space on each side of a dorsal mesentery, which is initially attached along the midline of the posterior body wall. During growth of the liver and rotation of the gut, certain portions of the gut fuse to the posterior body wall and become secondarily retroperitoneal. Through- out this process, peritoneal reﬂections are shifted from the midline and distorted in an irregular but predictable pattern.
After development is complete, certain parts of the kidneys contact intraperitoneal organs through an intervening layer of peritoneum, whereas other parts contact primarily or secondarily retroperitoneal organs without an intervening layer of peritoneum. The presence or absence of intervening peritoneum may affect the spread of infection or metastatic disease. 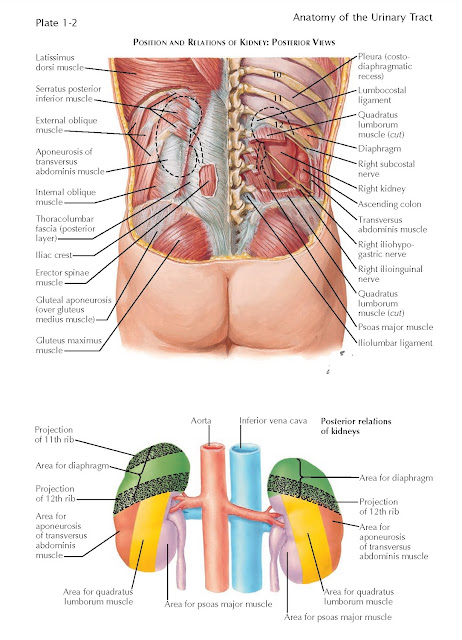 Left Kidney. The superolateral aspect of the left kidney contacts the spleen. Separating these organs is the peritoneum that forms the posterior surface of the perisplenic region of the greater peritoneal sac. A triangular area on the superomedial aspect of the left kidney contacts the stomach. Separating these organs is the peritoneum of the lesser sac (omental bursa). The splenic and gastric areas of the anterior renal surface are separated by the splenorenal ligament, a derivative of the dorsal mesentery that forms the left boundary of the lesser sac. The two layers of the peritoneum that form the splenorenal ligament enclose the splenic vessels.
The perihilar region of the left kidney contacts the tail of the pancreas, a secondary retroperitoneal organ, without intervening peritoneum. This point of contact occurs posterior to the left extremity of the transverse mesocolon, a horizontally disposed derivative of the embryonic dorsal mesentery that suspends the trans- verse colon from the secondarily retroperitoneal viscera (i.e., duodenum and pancreas).
The inferolateral aspect of the left kidney contacts the descending colon, which is secondarily retro- peritoneal, without intervening peritoneum. The infer-omedial aspect of the left kidney contacts loops of jejunum through an intervening layer of inframesocolic peritoneum.
Right Kidney. The upper two thirds of the right kidney contact the right lobe of the liver. The superior pole extends above the coronary ligament to directly contact the bare area of the liver without intervening peritoneum. Inferior to the pole, the kidney is covered with peritoneum that forms the posterior wall of the hepatorenal recess (also known as the Morison pouch), part of the subhepatic space of the greater peritoneal sac.
The perihilar region of the right kidney directly contacts the second (descending) part of the duodenum, which is secondarily retroperitoneal.
Most of the lower third of the right kidney is in direct contact with the right colic ﬂexure; however, a small section of the inferior pole may contact the small intestine through a layer of inframesocolic peritoneum.

Posterior Relations
The approximate upper third of both kidneys contacts the diaphragm. The diaphragm normally separates the kidneys from the diaphragmatic part of the parietal pleura. On occasion, however, a deﬁciency in the region of the lateral arcuate ligament or the lumbocostal trigone allows one of the kidneys to directly contact the overlying diaphragmatic pleura.
The upper third of the left kidney lies anterior to, and is thus protected by, the eleventh and twelfth left ribs. A smaller portion of the right kidney receives similar protection in its relationship to right twelfth rib. With regard to the lower two thirds of both kidneys, the lateral aspects rest on the aponeuroses of the transversus abdominis muscles; the central aspects rest on the quadratus lumborum muscles; and the medial aspects rest on the psoas muscles. 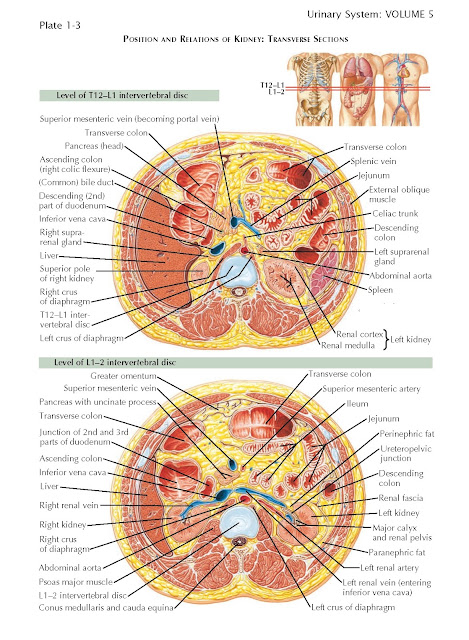 The psoas muscles take an oblique course from the lumbar vertebrae to the femurs, displacing the kidneys laterally. Because the right kidney lies inferior to the left kidney, it is generally displaced farther from the midline.
On each side, two or three nerves pass posterior to the psoas muscle, emerge from its lateral border, then travel between the kidneys and the aponeurosis of the transverse abdominis as they descend obliquely to the inguinal region. In craniocaudal order, these are the subcostal (T12 spinal) nerve and the L1 spinal nerve or its terminal branches the iliohypogastric and the ilioinguinal nerves.