pediagenosis    October 17, 2018    Musculoskeletal , Organ
MUSCLES OF SHOULDER
DELTOID MUSCLE
The deltoid muscle is triangular with a semicircular origin along the lateral third of the clavicle, the lateral border of the acromion, and the lower lip of the crest of the spine of the scapula. All fasciculi converge to be inserted on the deltoid tuberosity of the humerus. The deltoid muscle is a principal abductor of the humerus, an action produced primarily by its powerful central portion. Because of their position and greater fiber length, the clavicular and scapular portions of the deltoid muscle have different actions from those of the central portion of the muscle. The clavicular portion assists in flexion and internal rotation of the arm, while the scapular portion assists in extension and external rotation.


The axillary nerve (C5, C6) from the posterior cord of the brachial plexus supplies the deltoid muscle. An upper branch curves around the posterior surface of the humerus and courses from behind forward on the deep surface of the muscle, sending offshoots into the muscle. A lower branch supplies the teres minor muscle by ascending onto its lateral and superficial surface. It then becomes the superior lateral brachial cutaneous nerve. The posterior circumflex humeral artery serves this muscle. 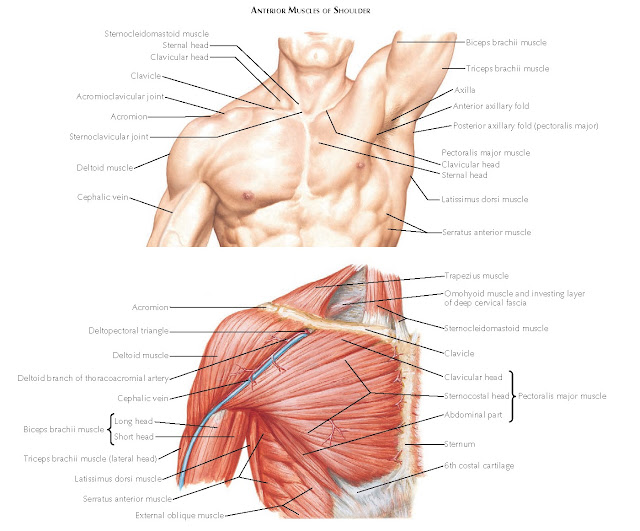 PECTORALIS MUSCLE
The pectoralis major muscle originates from the medial half of the clavicle on its anterior surface and the anterior surface of the manubrium and body of the sternum. Additional fascicles arise from the cartilages of the second to sixth ribs as well as from the anterior layer of the sheath of the rectus abdominis muscle. The muscular fibers converge to insert on the crest immediately distal to the  greater  tubercle, lateral to the bicipital groove. The tendon folds on itself to form a bilaminar U-shaped tendon with the fold of the tendon below. Thus, the fibers of the clavicular part insert as the upper part of the anterior lamina; the lower sternal and abdominal fibers reach up into the superior part of the posterior limb; and the sternal fibers distribute into the anterior lamina, the fold, and the lower part of the posterior lamina.
The pectoralis major muscle flexes and adducts the humerus; it is also capable of medial rotation of the arm but usually becomes active only when this action is resisted. The clavicular portion of the pectoralis major muscle elevates the shoulder and flexes the arm, while the sternocostal portion draws the shoulder downward. The muscle is innervated by the lateral and medial pectoral nerves from both the lateral and medial cords of the brachial plexus, involving all the roots (C5 to T1).  The pectoral branches of the thoracoacromial artery accompany the nerves to the muscle.
The deltopectoral triangle is a separation just below the clavicle of the upper and adjacent fibers of the deltoid and pectoralis major muscles. Distally, the separation of these adjacent fibers is made by the cephalic vein and the deltoid branch of the thoracoacromial artery.
The pectoralis minor muscle arises from the outer surfaces of the third, fourth, and fifth ribs near their costal cartilages, with a slip from the second rib a frequent addition. The muscle fibers converge to an insertion on the medial border and upper surface of the coracoid process. The pectoralis minor muscle draws the scapula forward, medially, and strongly downward. With the scapula fixed, the muscle assists in forced inspiration. The muscle is innervated by the medial pectoral nerve (C8, T1), which completely penetrates the muscle to pass across the interpectoral space into the pectoralis major muscle. Pectoral branches of the thoracoacromial artery are distributed with the nerve. Deep to the tendon of the pectoralis minor muscle pass the axillary artery and the cords of the brachial plexus. 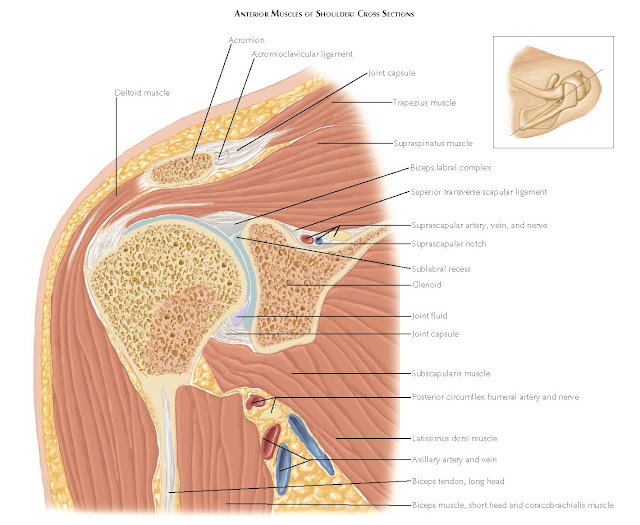 SERRATUS MUSCLE
The serratus anterior muscle originates laterally from the first eight ribs. The muscle fibers converge to insert on the deep surface of the lateral border of the scapular body. Contraction of the muscle protracts the scapula and participates in upward rotation of the scapula. Weakness results in scapula winging (see Plates 1-20 and 1-52). Innervation is supplied by the long thoracic nerve (C5 to C8), which can easily be injured during axillary lymph node dissection. The blood supply is primarily through the lateral thoracic artery.

SUBCLAVIUS MUSCLE
The subclavius muscle is a small, pencil-like muscle that arises from the junction of the first rib and its cartilage. It lies parallel to the underside of the clavicle and inserts in a groove on the underside of the clavicle, between the attachments of the conoid ligament laterally and the costoclavicular ligament medially. The muscle assists by its traction on the clavicle in drawing the shoulder forward and downward. The nerve to the subclavius muscle is a branch of the superior trunk of the brachial plexus, with fibers from the fifth cervical nerve, which reaches the upper posterior border of the muscle. There is a small, special clavicular branch of the thoracoacromial artery to the muscle. 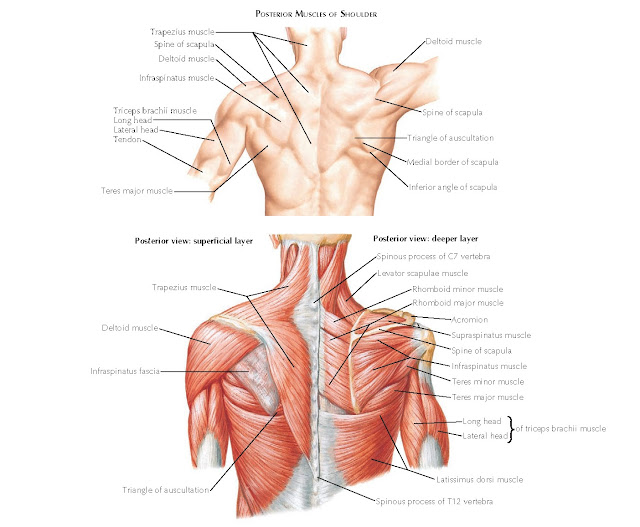 TRAPEZIUS MUSCLE
The trapezius muscle is divided into upper, middle, and lower divisions with a broad origin from the occipital protuberance superiorly to the spinous process of the T12 vertebrae inferiorly. It inserts onto the posterior border of the lateral third of the clavicle, the medial border of the acromion, and the upper border of the crest of the spine of the scapula. The directionality of the upper and lower divisions allows it to rotate the scapula so the glenoid faces superiorly, which allows full elevation of the upper extremity. The middle division serves to retract the scapula. When the function of the trapezius is absent, the scapula wings laterally owing to unopposed contraction of the serratus anterior (see Plate 1-52). The nerves reaching the trapezius muscle are the spinal accessory (cranial nerve XI) and direct branches of ventral rami of the second, third, and fourth cervical nerves. The accessory nerve perforates and supplies the sternocleidomastoid muscle and then crosses the posterior triangle of the neck directly under its fascial covering, coursing diagonally downward to reach the underside of the trapezius muscle. The trans- verse cervical artery of the subclavian system supplies the trapezius muscle; it is supplemented in the lower third of the muscle by a muscular perforating branch of the dorsal scapular artery.

LEVATOR SCAPULAE MUSCLE
The levator scapulae originates from the transverse processes of the first three or four cervical vertebrae. It inserts into the medial border of the scapula from the superior angle to the spine. It is overlapped and partially obscured by the sternocleidomastoid and trapezius muscles. It functions to elevate and adduct the scapula. Innervation is provided by the dorsal scapular nerve (C3 to C5), and blood supply is from the dorsal scapular artery. 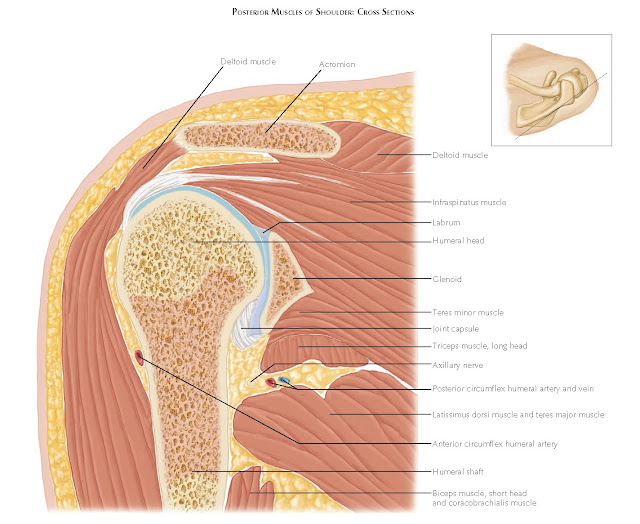 RHOMBOIDEUS MUSCLE
The rhomboideus minor muscle originates from the lower part of the ligamentum nuchae and the spinous processes of C7 to T1. It lies parallel to the rhomboi- deus major muscle, directed downward and lateralward, and it is inserted on the medial border of the scapula at the root of the scapular spine. The rhomboideus major muscle arises from the spinous processes of T2 to T5 and inserts on the medial border of the scapula below its spine. Both rhomboideus muscles draw the scapula upward and medially and assist the serratus anterior muscle in holding it firmly to the chest wall. Their oblique traction aids in depressing the point of the shoulder. The innervation and blood supply is the same as for the levator scapulae.

LATISSIMUS DORSI MUSCLE
The latissimus dorsi muscle originates from the inferior thoracic vertebrae, the thoracolumbar fascia, the iliac crest, and the lower third to fourth ribs. It inserts onto the floor of the intertubercular groove of the humerus. Contraction of this muscle extends the humerus, drawing the arm downward and backward and rotating it internally. The muscle is innervated by the thoracodorsal nerve from the posterior cord of the brachial plexus, with fibers from the seventh and eighth cervical nerves. The thoracodorsal artery, a branch of the sub- scapular artery, and a vein of the same name accompany the nerve.