Understanding Investigations II Radiology
Chest radiography
As respiratory di o common in paediatric practice, it is very important to be able to accurately interpret chest radiographs. If there is uncertainty, the film should be discussed with an experienced radiologist.


•   Identify the patient name, date and orientation (left and right).
•   Check the penetration—the vertebrae should just be visible behind the heart shadow.
•   Check that the alignment is central by looking at the head of the clavicles and the shape of the ribs on each side.
•   Comment on any foreign objects such as central lines.
• Examine the bony structures, looking for fractures, asymmetry and abnormalities (e.g. hemivertebrae). Rib fractures are best seen by placing the radiograph on its side.
•   Check both diaphragms and costophrenic angles are clear. The right diaphragm is higher than the left because of the liver. Check there is no air beneath the diaphragm (indicates intestinal perforation).
•   Look at the cardiac outline. At its widest, it should be less than half the width of the ribcage (cardiothoracic ratio < 0.5), although in infants it can be wider due to the anteroposterior way the radio- graph is taken.
•   Look at the mediastinum note that in infants the thymus gland can givea ‘sail’-like shadow just above the heart.
•   Check lung expansion if there is air trapping the lung fields will cover more than nine ribs posteriorly, and the heart will look long and thin.
• Examine the lung fields looking for signs of consolidation, vascular markings, abnormal masses or foreign bodies.
• Check that the lung markings extend right to the edge of the lung if not, consider a pneumothorax (dark) or a pleural effusion (opaque).
•   Consolidation may be patchy or dense lobar consolidation. A lateral radiograph may be required to determine exactly which lobe is affected. A rule of thumb is that consolidation in the right middle lobe causes loss of the right heart border shadow and right lower lobe consolidation causes loss of the right diaphragmatic shadow.
• Always look at the area ‘behind’ the heart shadow for infection in the lingula. If the mediastinum is pulled towards an area of opacity, consider collapse rather than consolidation as the pathology. 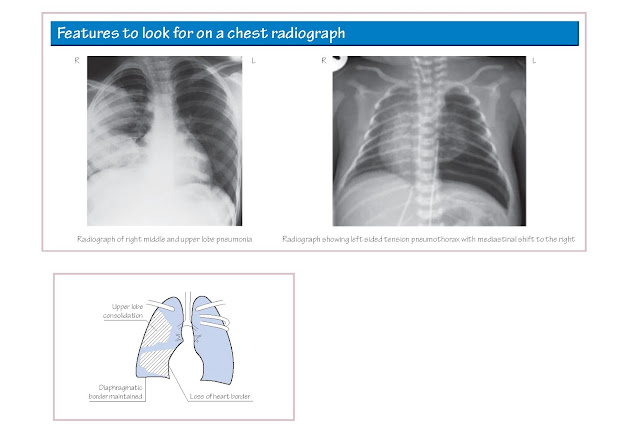 Magnetic resonance imaging scans
Magnetic resonance imaging (MRI) uses radio waves and powerful electromagnetic fields to obtain detailed images, which can high- light different tissues. Images can be obtained in any plane. MRI has the great advantage of being free of ionizing radiation. The scanners are often claustrophobic and can be noisy, so young children may require a general anaesthetic.
MRI is very good at delineating tissues with high water content from those with high fat content. MRI can distinguish white matter from grey matter within the brain. It is the imaging of choice for the investigation of CNS abnormalities including spinal abnormalities. Increasingly, it is being used for complex cardiac and joint imaging also. On a standard T2 weighted image, water (e.g. CSF or oedema) shows up white. On a T1-weighted image, it shows dark (Figures 6.1 –6.3). 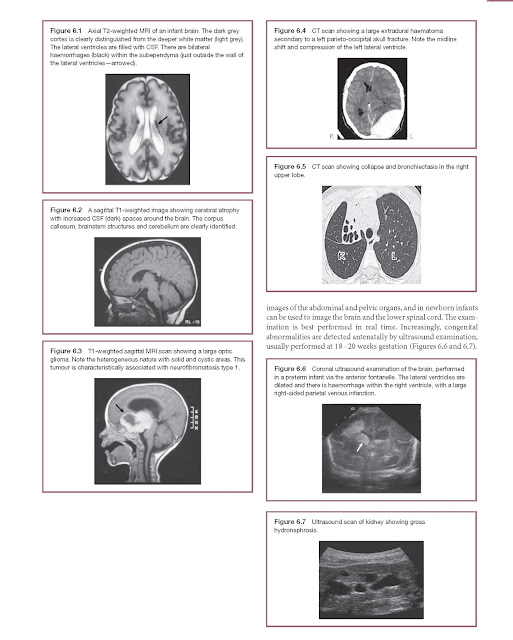 Computed tomography scans
Computed tomography (CT) scans also give ages (‘slices’ through the body). They have the advantage of being significantly faster to perform than MRI scans, and the machines are quieter and less claustrophobic, so children can be scanned while awake. CT is predominant in assessing traumatic brain injury and in imaging the lungs and is particularly good at detecting acute haemorrhage. The disadvantage is there is a significant radiation exposure (Figures 6.4 and 6.5).

Ultrasound
Ultrasound is an excellent investigation for children, since it is safe and non-invasive, and the ultrasound machine can often be brought to the patient’s bedside. It is used extensively to obtain images of the abdominal and pelvic organs, and in newborn infants can be used to image the brain and the lower spinal cord. The examination is best performed in real time. Increasingly, congenital abnormalities are detected antenatally by ultrasound examination, usually performed at 18 – 20 weeks gestation (Figures 6.6 and 6.7).

Related Posts
Pediatrics
Home
Give us your opinion