Ascending Aortic Cannulation
◆   The target area should be digitally palpated. The cannula should be inserted so that its flow direction and jet are away from the arch vessels (Fig. 2.4).
◆   Two sets of purse-string sutures (braided nonabsorbable 2-0) are placed around the target (8 to 10 mm diameter), with the free ends controlled with tourniquets on each side.
◆   There are several options for the actual cannulation, using a no. 15 or no. 11 blade. Some surgeons prefer to incise transmurally and control the opening with their finger, passing the tip of the cannula under the digit into the aortic opening (Fig. 2.5). Some cut in an oblique manner but control the resulting flap with the forceps, directing the cannula under control into the opening. Another elegant method involves incising only the adventitia and media, leaving the paper-thin intima to be punctured by the cannula (Fig. 2.6).

Femoral Artery Cannulation
◆  The safest skin incision for femoral cannulation is a vertical incision overlying and just slightly medial to the femoral pulse (Fig. 2.7). An alternative incision is a slightly oblique incision aligned with the inguinal ligament to facilitate healing.
◆  Lymphatic vessels should be carefully cauterized or ligated to prevent the formation of a lymphocele and persistent drainage.
◆  Proximal and distal control of the femoral artery should be obtained. A target site for the arteriotomy should be chosen after considering where the proximal clamp may be safely placed and how the repair will be accomplished when the cannula is removed (Fig. 2.8, A). The distal vessels may be occluded with separate clamps or tapes (see Fig. 2.8, B).
◆ The arteriotomy should be made in a transverse fashion and the femoral cannula gently introduced while an assistant releases the proximal clamp. The cannula is then secured by tying it to the proximal snare, with a second suture securing the tubing to the surface of the thigh. 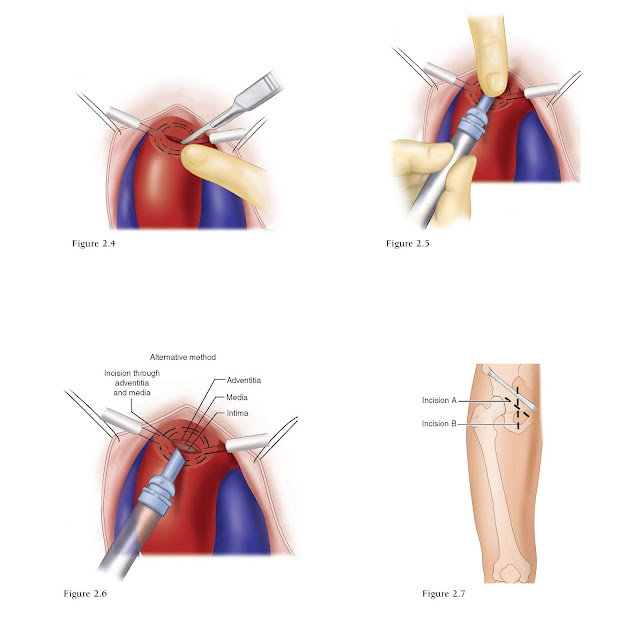 Axillary Artery Cannulation
◆    A 5- to 8-cm transverse incision is made about 2 cm below the clavicle, overlying the delto- pectoral groove (Fig. 2.9). The dissection is continued between the fibers of the pectoralis major. There is often soft fat in this space, and the area should be dissected gently to avoid tearing of vessels and blood staining. The exposure is further aided by two self-retaining retractors. In an emergency, it is often necessary to sacrifice small nerves to the pectoralis major.
◆    The cephalic vein is identified in this space, where it penetrates the fascia to join the axillary vein. The clavipectoral fascia is incised, and the pectoralis minor muscle is retracted laterally or partially dissected. The axillary vein should be encircled with loops and gently retracted cephalad.
◆    The artery, which lies superior and deep to the vein, can be identified by palpation and then exposed and controlled proximally and distally with tapes. Arterial branches of the thoracoacromial trunk may be encountered and should be controlled with silk snares. Care must be taken to avoid touching the medial and lateral brachial plexus cords.
◆    After heparin is administered, the artery can be controlled with clamps, but we prefer to use a partial occluding clamp at the arteriotomy site. An 8-mm tube graft should be anastomosed to this site (Fig. 2.10) and the arterial cannula inserted into the tube graft. The cannula is not advanced into the axillary artery proper, but rather perfuses from within the graft.5
◆   At the end of the procedure, the stump can be controlled with several very large hemoclips applied transversely and then oversewn with 4-0 polypropylene sutures. 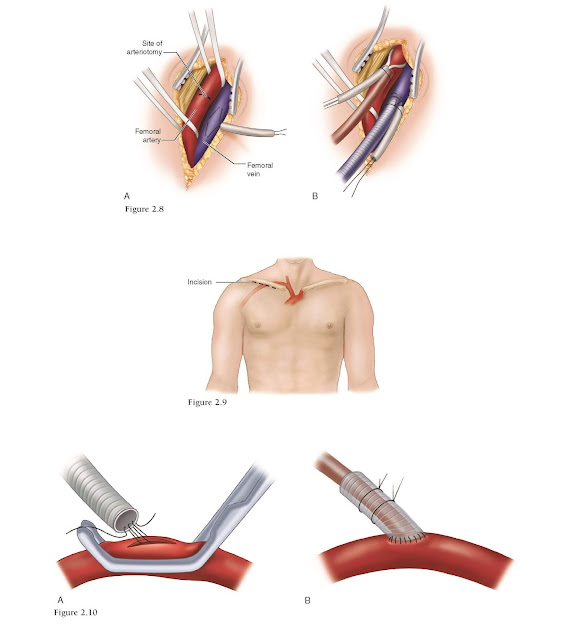 Transapical Cannulation
◆    This technique is extremely useful in situations of severe atherosclerotic disease of the aorta (porcelain aorta) or for a type A dissection in an emergency (Fig. 2.11).
◆    Venous (right atrial) cannulation should be obtained first to allow for the rapid institution of bypass after cannulating the apex. Similarly, if possible, the right superior pulmonary vein should be cannulated first for venting because it is difficult to mobilize the heart after the cannula is in place for fear of left ventricular tearing. An easy alternative is to vent the pulmonary artery.
◆  Manipulation of the apex may cause instability, so the equipment should be ready before proceeding.
◆    A 14 F needle is inserted in the apex, and a guidewire is passed across the aortic valve with transesophageal echocardiography (TEE) guidance. A laparotomy pad is placed under the left ventricular apex to stabilize the heart.
◆    There is no need to predilate the opening. A wire-reinforced cannula with an inner dilator is passed over the guidewire and positioned across the aortic valve. The cannula is then connected to the circuit and de-aired, and bypass is commenced. Its position can be verified by TEE (Fig. 2.12).
◆    It is not recommended to place purse-string sutures in the epicardium until after bypass has started because beating of the heart may cause tearing. Once the heart is on bypass, however, with the heart decompressed, we place two large, braided, pledgeted purse strings, controlled with a tourniquet. The cannula is tied to these tourniquets and is also fixed to the skin to prevent motion.
◆ The strategy to deal with the relevant aortic pathology (e.g., dissection) should include provision of an alternative cannulation site (e.g., side graft to ascending aortic tube graft) to allow the apical cannula to be removed and the purse strings tied while the heart is flaccid. We further buttress this repair with biologic glue. 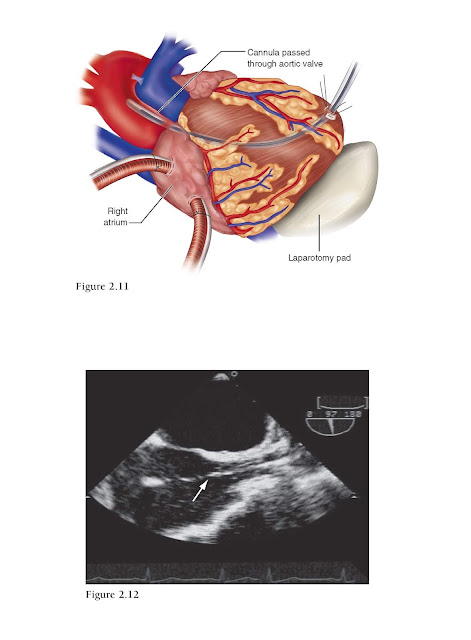