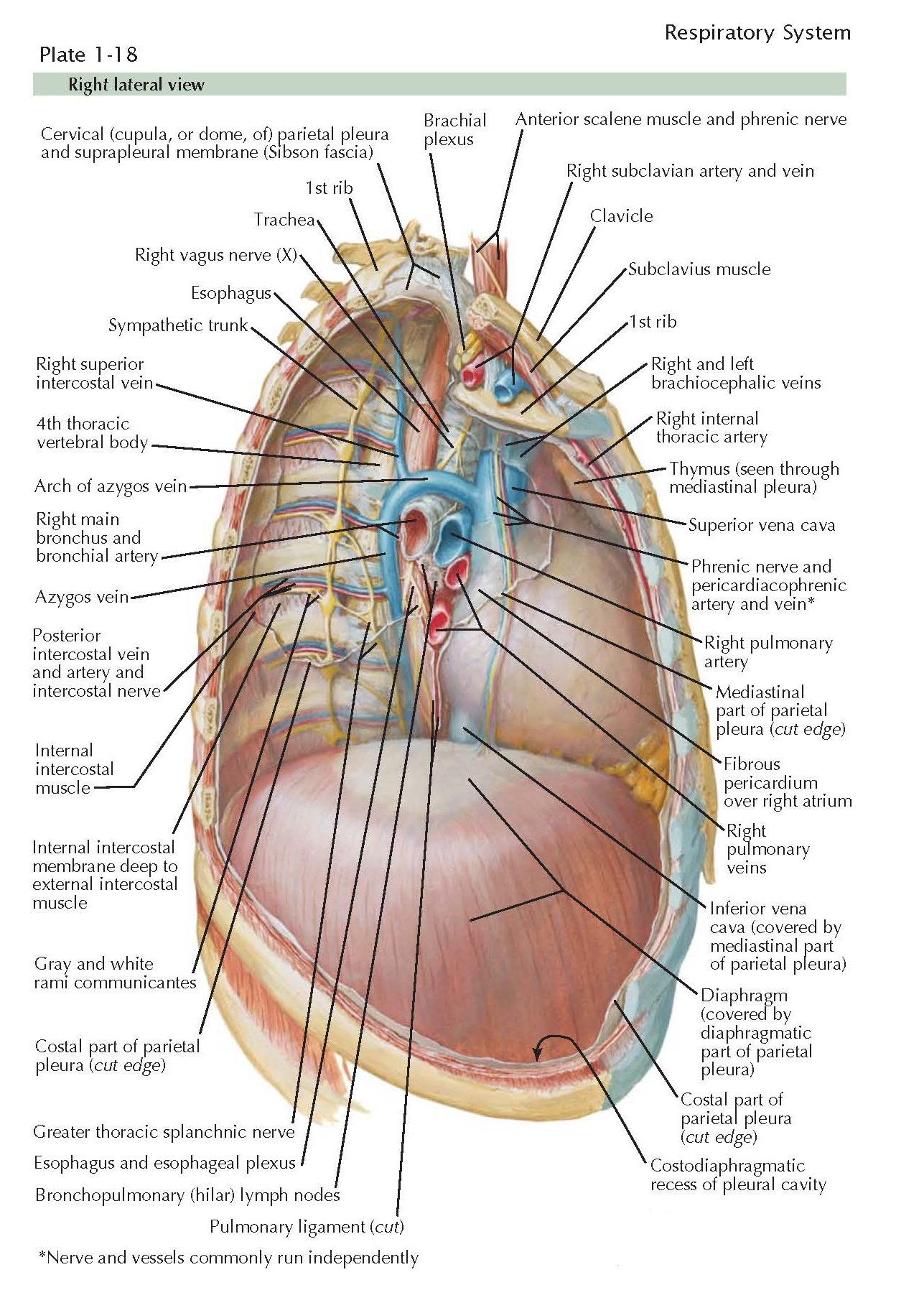 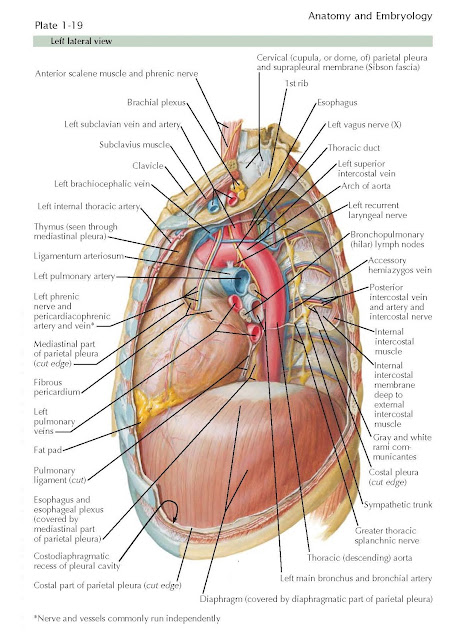 RIGHT THORACIC CAVITY
The hilum of the right lung contains the right main bronchus with the right pulmonary artery trunk anterior and the right pulmonary veins anteriorly and inferiorly. The azygos vein arches over the root of the right lung at the hilum to empty into the superior vena cava. As the azygos vein begins to arch, it receives the right superior intercostal vein, which accepts blood from the upper three or four intercostal spaces.
The visceral pleurae reﬂect onto the parietal mediastinal surface immediately below the hilum of the right lung to form the pulmonary ligament.
The thoracic portion of the right ganglionated sympathetic trunk courses vertically near the necks of the ribs and is connected with each intercostal nerve by a gray and a white ramus communicans. The splanchnic nerves branch from the ﬁfth (or sixth) to the twelfth ganglia and course medially and inferiorly to pierce the crus of the diaphragm and enter the abdominal cavity. The right phrenic nerve and the pericardiacophrenic artery and vein pass vertically between the mediastinal parietal pleura and the pericardial sac to supply the diaphragm.
The medial “wall” of the right thoracic cavity is formed by the thoracic vertebral bodies posteriorly and anteriorly by the mediastinum, dominated by the pericardial sac containing the heart. The posterior, lateral, and anterior walls of the right thoracic cavity comprise the thoracic cage, which is limited inferiorly by the diaphragm.

LEFT THORACIC CAVITY
The structures forming the hilum of the left lung are the left main bronchus, left pulmonary artery, and left pulmonary veins. The pulmonary artery is located superior to the left main bronchus with the left pulmonary veins posterior and inferior.
The aorta arches over and descends posterior to the left hilum. As it descends, it lies at ﬁrst to the left of the thoracic vertebral bodies (starting with the lower border of the fourth vertebra); it then approaches the anterior aspect of the vertebral bodies, where it lies as it pierces the diaphragm. The aorta gives off nine pairs of intercostal arteries. They supply the lower nine intercostal spaces.
The ligamentum arteriosum (the remnant of the embryonic ductus arteriosus) runs between the left pulmonary artery and the aortic arch.
The thoracic portion of the left ganglionated sympathetic trunk is similar to the portion on the right side and does not need special description here.
The left phrenic nerve and the left pericardiacophrenic artery and vein cross the aortic arch and descend between the mediastinal parietal pleura and the pericardial sac to pass through the muscular part of the diaphragm.
The left vagus nerve passes in front of the arch at the aorta, giving off its recurrent branch, which passes under the arch to course upward to the larynx. The vagus nerve continues caudally on the posterior aspect of the root of the lung to enter the esophageal plexus, from which the left vagal trunk emerges to follow the esophagus into the abdomen.
The left superior intercostal vein typically drains blood from the upper three or four intercostal spaces. It crosses the aortic arch and the beginnings of the left subclavian and left common carotid arteries and empties into the left brachiocephalic vein, often anastomosing with the accessory hemiazygos vein.
The medial wall of the left thoracic cavity is formed by the thoracic vertebral bodies posteriorly and the mediastinum containing the pericardial sac and the heart. As with the right thoracic cavity, the posterior, lateral, and anterior walls of the left thoracic cavity are formed by the thoracic cage and limited inferiorly by the diaphragm.