ANOMALIES OF THE URACHUS


ANOMALIES OF THE URACHUS
As described on page 32, the urorectal septum partitions the cloaca into the primitive urogenital sinus and the rectum. The urogenital sinus, which gives rise to the bladder, is initially continuous with the allantois, a tube that extends into the connecting stalk (see Plate 2-4 for an illustration). As the bladder matures and descends into the pelvis, however, the allantois narrows to form a thick, epithelial-lined tube known as the urachus. Normally the urachus regresses into a ﬁbrous cord, known as the median umbilical ligament. For uncertain reasons, however, this normal regression process sometimes fails, resulting in a persistent urachus that is either partially or completely patent. Because many urachal anomalies are undiagnosed, their overall incidence is unknown. 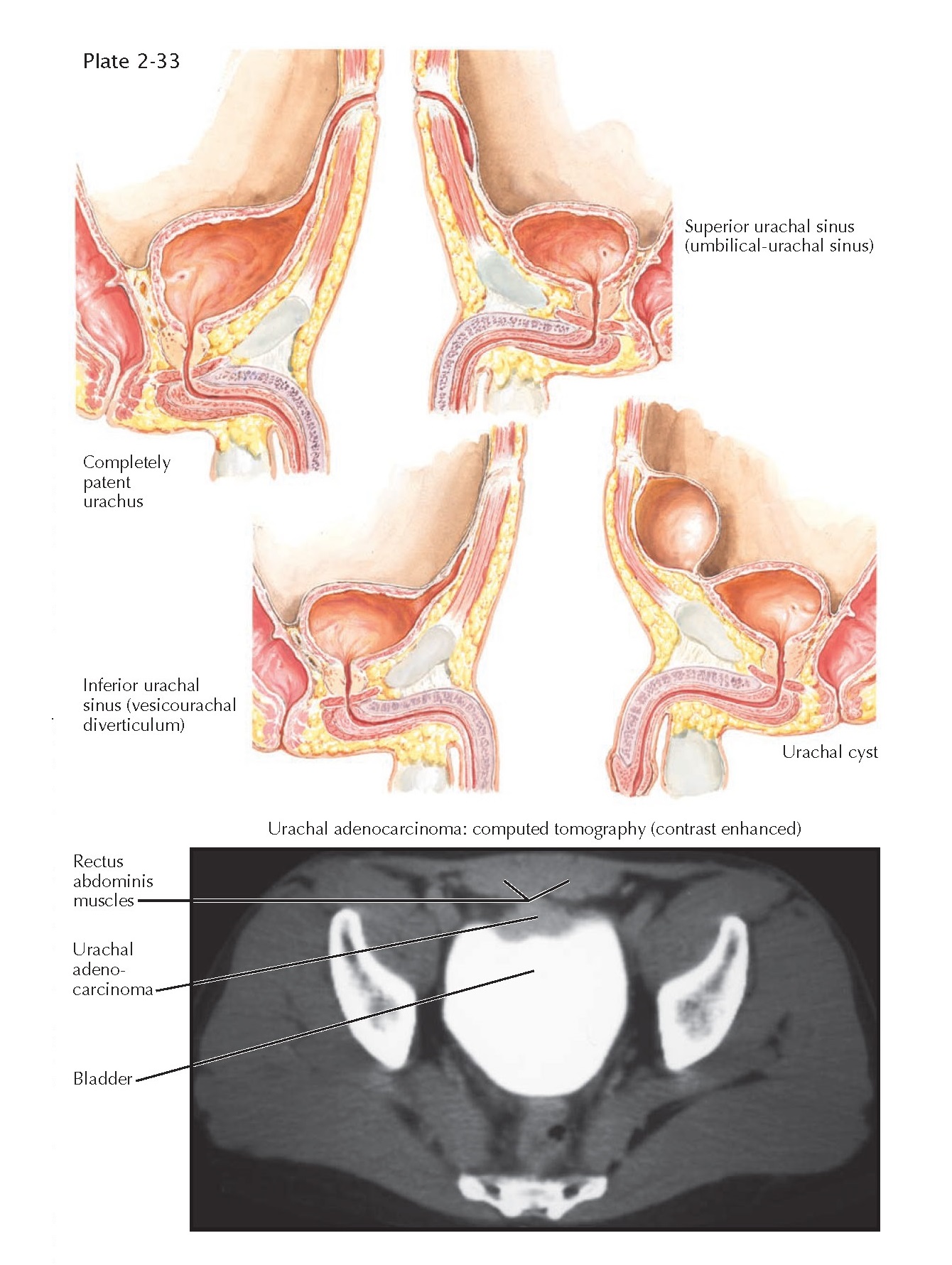 Presentation And Diagnosis
An entirely patent urachus, which permits drainage of urine from the bladder to the umbilicus, accounts for about half of urachal anomalies. It typically presents during the neonatal period as dribbling of ﬂuid from the umbilicus. The ﬂuid leakage may increase in response to bladder contraction during either purposeful voiding or other increases in intraabdominal pressure, such as during crying or straining. Umbilical edema and delayed healing of the umbilical stump may also be noted. The diagnosis can be conﬁrmed with either sonographic evaluation of the bladder or with more invasive studies, such as a retrograde ﬁstulogram or voiding cystourethrogram (VCUG).
A patent area at the distal end of the urachus, which communicates with the umbilicus, is known as a superior urachal sinus (or umbilical-urachal sinus) and accounts for 15% of urachal anomalies. Like a patent urachus, a superior sinus causes umbilical discharge during the neonatal period, although the ﬂuid is not as copious. The diagnosis is best established by performing retrograde sinography.
A patent area in the middle of the urachus, which communicates with neither the umbilicus nor bladder, is known as a urachal cyst and accounts for about 30% of urachal anomalies. A urachal cyst is often not discovered until childhood or adulthood. It may be noted as an incidental ﬁnding during laparotomy; as a palpable midline mass; or as a site of infection, usually with Staphylococcus aureus, with associated pain and erythema. Either ultrasound or computed tomography can be used to establish the diagnosis.
Finally, a patency in the proximal end of the urachus, which communicates with the apex of the bladder, is known as an inferior sinus (or vesicourachal diverticulum) and accounts for 5% of urachal anomalies. It usually does not cause symptoms because it is has a large opening into the bladder lumen and does not communicate with other structures. In rare instances, however, it may act as a site of calculus formation or lower urinary tract infection. A VCUG, usually performed for some other indication, can establish the diagnosis.

Treatment
A patent urachus or superior sinus should be excised using either an open or laparoscopic technique. It is essential to remove all abnormal urachal tissue because there is a small risk of later malignant transformation. Thus, in addition to the urachus, a cuff of surrounding bladder tissue should be removed as well.
An asymptomatic urachal cyst or inferior sinus can be managed with careful observation since spontaneous resolution is possible. If resolution does not occur, however, or if symptoms merge, all urachal tissue should be carefully excised.