Hypopituitarism and Non-Functioning Pituitary Adenomas
Non-functioning pituitary adenomas
Non-functioning pituitary adenomas (NFPAs) are bioc cally inert tumours. They usually present with the physical effects of a pituitary mass lesion (e.g. visual field loss, headache and hypopituitarism) or, increasingly, when discovered incidentally on routine brain MRI (‘pituitary incidentalomas’). Surgical decompression is indicated if there is a visual field defect or if the lesion is close to the optic chiasm.
The usual route for removal is trans-sphenoidally, although trans-cranial surgery is occasionally needed. NFPAs can cause hypopituitarism by compressing the normal gland, which requires endocrine replacement. Histologically, NFPAs can have positive immunostaining for inactive LH and FSH, but they do not secret bioactive hormones. Patients with significant postoperative residual tumour may require radiotherapy. 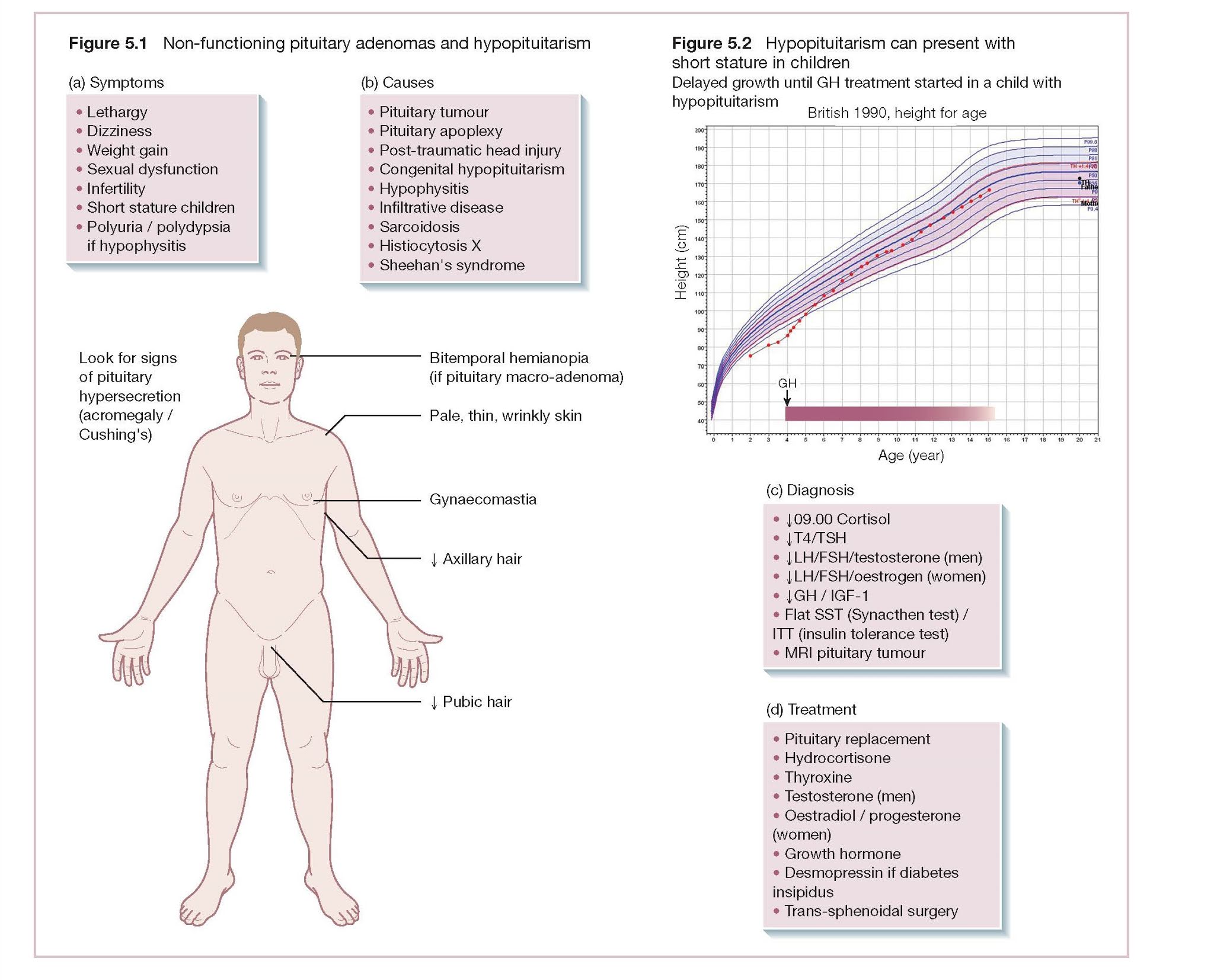 Hypopituitarism
Causes
Hypopituitarism has several causes, either congenital (from pituitary transcription factor defects) or acquired. Acquired hypopituitarism is most commonly caused by the presence of a pituitary tumour. Other acquired causes include inflammatory and infiltratitive disorders, traumatic brain injury and radiotherapy (Figure 5.1). In patients with hypopituitarism and a large empty pituitary fossa on MRI, it is important to enquire about a previous history of severe headache, as this may reflect missed pituitary apoplexy (Chapter 36).
Order of anterior pituitary hormone loss
In pituitary tumours, compression of the stalk usually leads to loss of pituitary hormones in the following order: GH, gonadotrophins, TSH then ACTH. Of these, ACTH deficiency is the most urgent problem as secondary hypoadrenalism has significant clinical implications requiring immediate hydrocortisone replacement. Pituitary stalk compression by NFPAs leads to mild hyperprolactinaemia, typically <5000 miU/L. Prolactin >5000 miU/L in the context of a large pituitary lesion suggests active prolactin secretion from a macro- prolactinoma (Chapter 6) rather than NFPA. This is an important distinction because prolactinomas are managed medically, while NFPAs are managed surgically. Patients with pituitary adenomas hardly ever develop diabetes insipidus (in the absence of surgery), hence confirmed diabetes insipidus should lead to consideration of alternative diagnoses, such as inflammatory hypophysitis, craniopharyngioma or metastasis as a cause of the hypopituitarism (Chapter 7).
Clinical presentation
Visualfieldlossfrompituitarytumoursisaspecificdiscriminatory clinical feature, but hypopituitarism often causes non-specific symptoms including lethargy, weight gain and sexual dysfunction (Figure 5.1). In adults, acquired hypopituitarism has often been present for many years prior to diagnosis, and symptoms can mimic common diseases such as depression. Hypopituitarism can present as an acute hypoadrenal crisis, with hyponatraemia and hypotension, which is a medical emergency (Chapter 13). In children, short stature may be a presenting feature (Chapter 24).
Investigation
In patients with suspected hypopituitarism, the priority is assessment of the adrenal axis. Patients with chronic ACTH deficiency (>4 weeks) will have a suboptimal response to Synacthen, as a result of adrenal atrophy. In acute hypopituitarism (e.g. pituitary apoplexy; Chapter 36), the Synacthen test is not a reliable test of ACTH reserve as the adrenals will not have had sufficient time to become atrophic and can give a falsely reassuring normal cortisol response.
Secondary hypothyroidism  is  demonstrated  by  a  low  (or low end of normal) T4 with inappropriately normal TSH. Secondary hypogonadism is confirmed by low sex hormones with non-elevated LH and FSH. In postmenopausal females, LH and FSH levels are a good screening test for hypopituitarism, as gonadotrophins should be elevated at this stage of life. GH deficiency is suggested by low or low–normal IGF-1 levels; dynamic GH-stimulation tests are required to confirm this before starting treatment. The imaging investigation of choice in hypopituitarism is MRI, although CT can give reconstructed views of the pituitary fossa in patients who cannot undergo MRI.
Treatment
Patients with ACTH deficiency often feel immediately better with appropriate hydrocortisone replacement, reporting increased energy and appetite with a general improvement in symptoms. In the acute situation, hydrocortisone can be life-saving (Figure 5.1). TSH deficiency is treated with standard thyroxine replacement, with dosage titrated according to symptomatic improvement and fT4 levels, as TSH cannot be used as a guide. Patients with gonadotrophin deficiency need appropriate sex hormone replacement. Men with gonadotrophin deficiency may benefit from testosterone replacement, both for symptom control and protection from osteoporosis. Testosterone is given by gel or injection. Women with oestrogen deficiency are given oestrogen and progesterone replacement as appropriate, which can be given as the combined contraceptive pill or hormone replacement therapy (HRT).
Growth hormone deficiency
Growth hormone deficiency in adults can give rise to reduced quality of life, reduced muscle and bone mass, and increased fat masswithanadversecardiovascularprofile. GHdeficiencyshould be considered in all patients with pituitary disease with impaired quality of life, as replacement has the potential to improve this significantly. Recombinant GH is administered as a daily subcutaneous injection. In order to qualify for treatment, GH deficiency should be established as severe through biochemical testing, and response to treatment should be documented using Adult Growth Hormone Deficiency Assessment (AGHDA) rding to National Institute for Health and Care xcellence (NICE) guidelines.