POSTERIOR URETHRAL VALVES
Posterior urethral valves (PUVs) are abnormal mucosal folds in the distal urethra that arise during fetal development and interfere with the normal outﬂow of urine. They are the most common cause of congenital urinary tract obstruction, occurring in 1 in 8000 to 1 in 25,000 live births, and are seen only in males. Even if treated early on, the obstruction associated with PUVs frequently causes severe, often permanent urinary tract abnormalities.
The traditional classiﬁcation system describes two major types of valves, which vary both in morphology and relative frequency. Type I valves, said to account for more than 95% of cases, begin as a mucosal ridge from the seminal colliculus, which extends distally and divides into two ﬂaps that fuse with the walls of the membranous urethra. There is typically incomplete fusion of the ﬂaps with the anterior wall of the urethra, and there is a small opening in the membrane near the posterior wall of the urethra, adjacent to the seminal colliculus. Type III valves, in contrast, are said to account for about 5% of cases and resemble disklike membranes that span the entire circumference of the membranous urethra and contain a small central opening. (Type II valves, extending from the seminal colliculus toward the bladder neck, are no longer thought to be actual valves but rather bladder neck hypertrophy, which accompanies any distal urethral obstruction.) More recent work, however, suggests that in fact all PUVs are membranous, originally resembling type III valves, and that type I valves are actually an artifact of urethral instrumentation, which divides the single membrane into two ﬂaps. 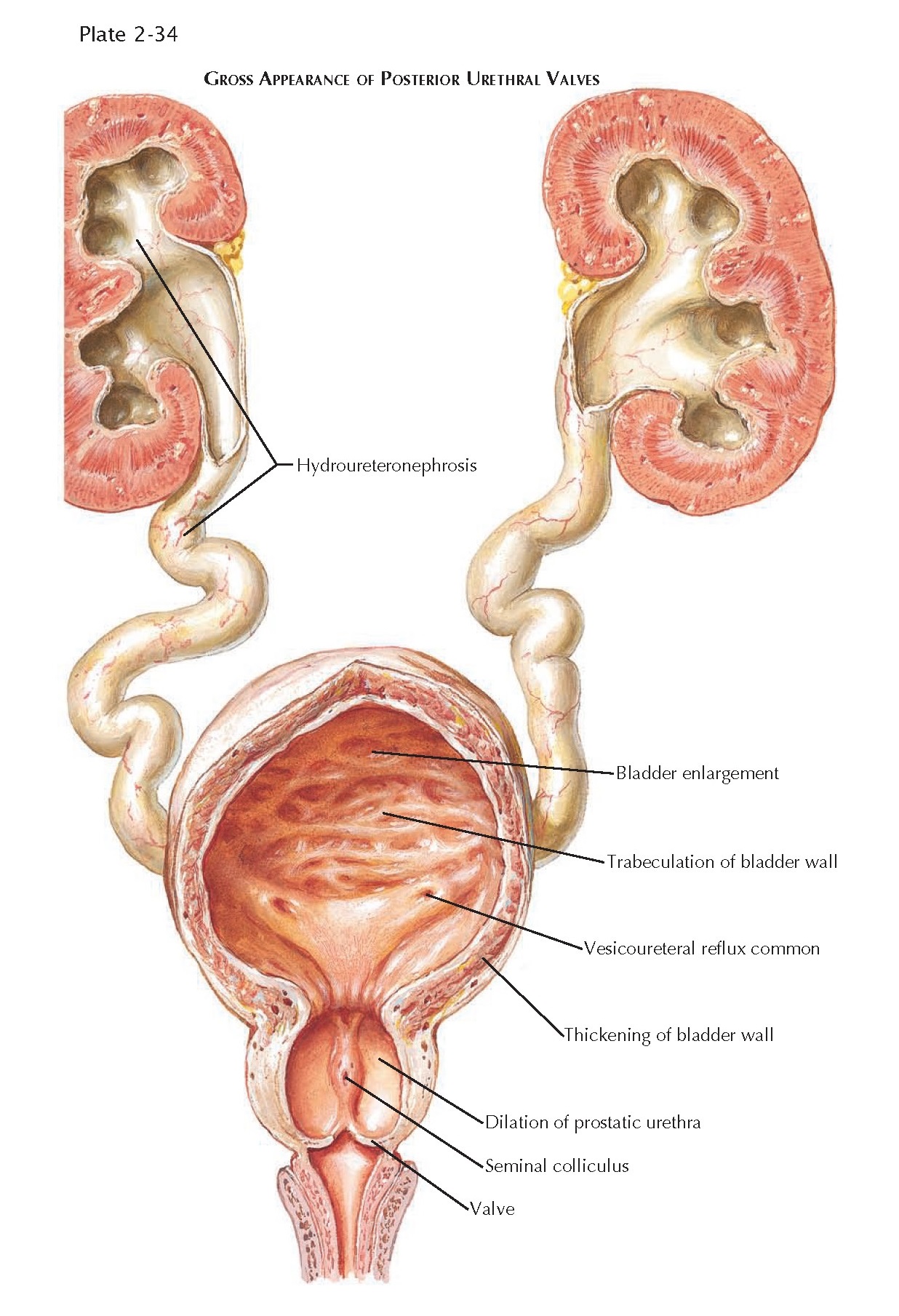 Presentation And Diagnosis
The majority of PUVs are noted on prenatal ultrasonography. Although the valves themselves are too small to be seen, the anatomic sequelae of the chronic outﬂow obstruction are evident, including dilation of the prostatic urethra and bladder, thickening of the bladder wall, and bilateral hydroureteronephrosis. The dilated prostatic urethra can be seen caudal to the dilated bladder, a phenomenon known as the “keyhole” sign. The renal parenchyma itself may also appear abnormal, generally manifest as increased echogenicity. If the obstruction is severe, oligohydramnios may be seen. Of note, many of these features may not be prominent if ultrasound is performed before 24 weeks of gestation.
If PUVs are not evident antenatally, their sequelae generally become apparent in the ﬁrst year of life, with the exact timing depending on the severity of the obstruction.
Patients with the most severe obstructions present at birth with pulmonary hypoplasia and Potter facies owing to oligohydramnios during gestation (see Plate 2-8), as well as enlarged, poorly functional kidneys that may be noted as palpable abdominal masses.
The remaining patients present in the weeks to months after birth with failure to thrive, urinary tract infection, and often a poor urinary stream. On further assessment, these patients are found to have renal insufﬁciency, which results not only from obstruction-induced damage to the renal tubules, but also from renal dysplasia secondary to a developmental obstruction to urine outﬂow.
The deﬁnitive diagnostic test in the infant is a voiding cystourethrogram (VCUG), which reveals dilation of the bladder and prostatic urethra. The valves them selves may be visible as urethral ﬁlling defects. The bladder wall may appear trabeculated and contain diverticula, both of which reﬂect chronic obstruction (see Plate 6-2). A variable degree of vesicoureteral reﬂux may also be seen because even normally formed ureterovesical junctions may be unable to tolerate the high pressure resulting from the outlet obstruction. In addition to the VCUG, a renal scan may also be performed to assess the remaining level of renal function and measure the severity of the obstruction. 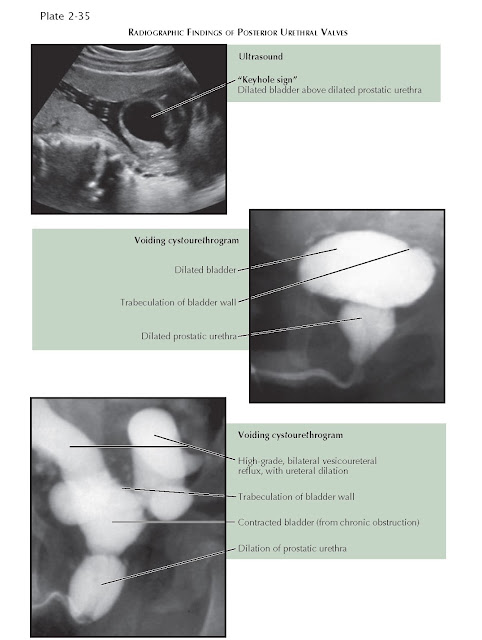 Treatment
The ﬁrst goal of treatment is urinary drainage. Although prenatal interventions have been attempted in an effort to limit damage to the developing kidneys, this is not a common practice, and thus most patients are treated immediately after birth. In most cases, draining the bladder can be accomplished simply by placing a urethral catheter. In the acute period, patients may require a host of additional interventions to address the pulmonary hypoplasia that can result from oligohydramnios, as well as the ﬂuid and electrolyte abnormalities that can occur secondary to renal insufﬁciency.
Once bladder drainage has been established, the patient can be monitored for several weeks. After this period, the treatment of choice for full-term, normal-sized infants is cystoscopic valve ablation using a laser, cold knife, hook, or other device. It is important to permit urination immediately after the ablation to prevent stricture formation. In a premature or low-birth-weight neonate with a small caliber urethra that would not permit endoscopic ablation, a cutaneous vesicostomy may be performed as a temporizing measure. Once the infant is older and the urethra is large enough to accommodate a pediatric cystoscope, delayed valve ablation and eventual reversal of the vesicostomy can be performed.
The long-term clinical syndrome that results from PUVs is known as the “valve-bladder syndrome.” Affected patients have large bladder volumes and subsequent overﬂow incontinence, which occur because bladder compliance and sensation decrease in response to longstanding obstruction. The large bladder volumes perpetuate obstructive injury to the kidneys. The injured kidneys, in turn, worsen the overﬁlling problem because their damaged collecting ducts become unable to appropriately concentrate urine. Some of these changes may be reversible if bladder pressure is regularly reduced, as with clean intermittent catheterization.