PUBERTY ABNORMALITIES
PUBERTY ABNORMALITIES IN MALES
Abnormalities of puberty are generally due to issues of timing or dosage of sex steroids that normally govern phenotypic change. As discussed in Plate 1-5, androgens are converted to estrogens in the male by aromatase and because of this, male adolescence is frequently (80%) accompanied by gynecomastia. Issues of delayed puberty are a consequence of the lack of gonadotropinreleasing hormone (GnRH) stimulation in patients with hypogonadotropic hypogonadism, as typiﬁed by Kallmann syndrome and its variants and Prader-Willi syndrome (Plate 1-7). Idiopathic hypogonadotropic hypogonadism (IHH) or Kallman syndrome is characterized by hypogonadism. Most patients experience a delay in puberty, although those with less severe defects may present with only infertility. Other ﬁndings include anosmia and midline abnormalities such as cleft palate and small testes. When anosmia is not present, the condition is termed IHH. The clinical diagnosis is con- ﬁrmed by blood tests revealing a low total testosterone associated with low luteinizing hormone (LH) and low follicle stimulation hormone (FSH) levels in combination with normal prolactin. The condition is inherited as a familial disorder in one third of cases. X-linked and autosomal inheritance patterns have been described. In the X-linked recessive form, deletions occur in KAL1 (kallman-interval 1), a gene responsible for the migration of GnRH and olfactory neurons to the preoptic area of the hypothalamus during development. As a consequence, there is failure of testicular stimulation by the anterior pituitary and hypothalamus and thus testis failure in addition to anosmia. Mutations in other genes have also been associated with IHH, including Dax1 on the X chromosome (associated with congenital adrenal hyperplasia [CAH]), the GnRH receptor and PC1 (associated with diabetes and obesity). Low testosterone is generally treated with testosterone replacement. Infertility due to azoospermia (no ejaculated sperm) can be treated with gonadotropin (LH and FSH) replacement over 12 to 18 months, which induces sperm in the ejaculate in 80% of affected men. 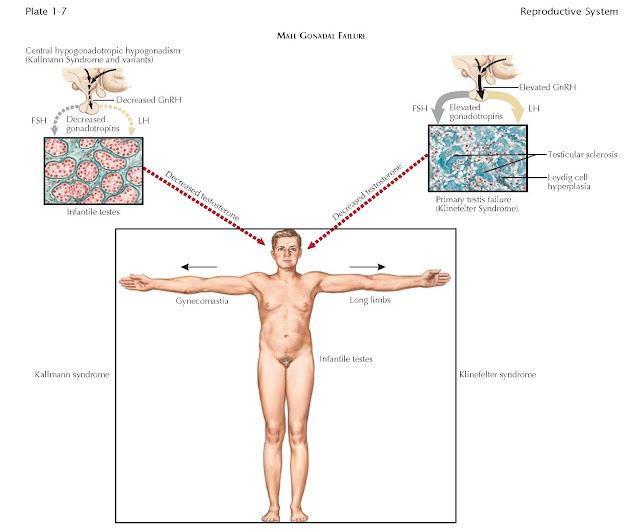 Primary testis failure, causing an inadequate testosterone surge at puberty and exempliﬁed by Klinefelter syndrome, may also produce a delay in the onset or sequence of pubertal events (Plate 1-7). Klinefelter syndrome is an abnormality of chromosomal number in which 90% of men carry an extra X chromosome (47,XXY) and 10% are mosaic with a combination of XXY/XY chromosomes. It is thought that approximately half of XXY cases are paternally derived, and recent evidence suggests that its occurrence may correlate with advanced paternal age. This syndrome may present with delayed puberty, increased height, decreased intelligence, varicosities, obesity, diabetes, leukemia, increased likelihood of extragonadal germ cell tumors, and breast cancer (20-fold higher than normal males). Testis biopsies show sclerosis and hyalinization. In adults, hormones usually demonstrate a low testosterone and frankly elevated LH and FSH levels and generally require testosterone replacement. Natural paternity with this syndrome is possible, but almost exclusively with the mosaic or milder form of the disease. Biologic paternity in cases of pure XXY males is now possible with assisted reproduction. 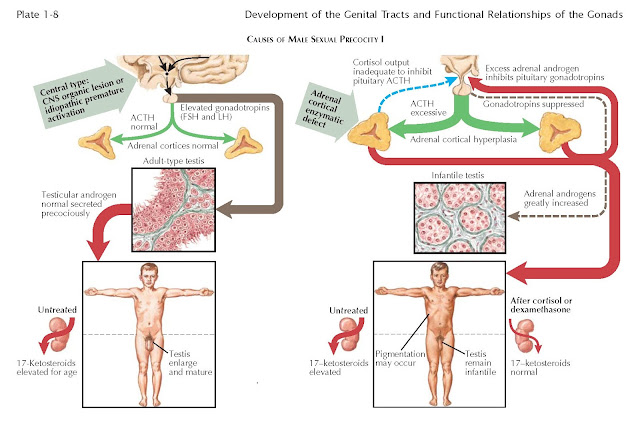 Sexual precocity, or the early onset of puberty, has a variety of causes in males (Plate 1-8). In idiopathic form (50% of cases), puberty proceeds in a normal pattern but begins earlier and is compressed into a shorter time frame. Although affected males are tall for their age during early puberty, the premature closure of the epiphyses results in a markedly short stature in adulthood. Central causes of precocious puberty include brain tumors near the third ventricle, including astrocytoma, meningioma, or pinealoma, and are usually accompanied by diabetes insipidus and visual ﬁeld defects. It can also be associated with congenital mal- formations such as hematomas of the brain.
Other causes of male precocious puberty are adrenal in origin and include CAH and benign or malignant virilizing adrenal cortical tumors (Plates 1-8 and 1-9). There are two major types of CAH: classic and nonclassic. The classic form is the more severe of the two and affects very young children and newborns. The nonclassic form is milder and usually develops in late childhood or early adulthood. Signs and symptoms of classic CAH in infants include an enlarged penis in boys (macrogenitosomia), failure to regain birth weight, weight loss, acne, dehydration, vomiting, and pigmentation of the scrotum and perianal regions. Signs and symptoms of the classic condition in older children and adults include rapid growth during childhood, very early puberty with the development of pubic hair and deepening of the voice, shorter than average ﬁnal height, and infertility. Nonclassic CAH generally presents with rapid growth during childhood and early puberty, severe acne, nausea, fatigue, low blood pressure, low bone density, high cholesterol, and obesity. Children can also often have slow recovery from infections and colds. Fundamentally, CAH results from a deﬁciency of one of the hydroxylase enzymes that are required for cortisol synthesis from 17-hydroxyprogesterone. Impaired cortisol secretion activates pituitary gland secretion of excessive ACTH, and the adrenal gland undergoes compensatory hypertrophy as a result. In addition, large quantities of cortisol precursors are made that form the substrates for androgens. Excessive androgens contribute to the virilization and also down- regulate pituitary gonadotropin secretion, so that the testes remain small and infantile despite other pubertal changes. The clinical signs of a virilizing adrenal adenoma or cortical carcinoma are similar to those induced by any other cause (Plate 1-8). These conditions can be differentiated from other causes by the lack of suppression of 17-ketosteroid secretion with exogenous glucocorticoids.
Primary testicular tumors can also cause precocious puberty (Plate 1-9). Based on proliferation of interstitial Leydig cells, these tumors can usually be palpated as nodular enlargement of one testis with a contralateral atrophic testis. Again, 17-ketosteroids are usually not suppressed with glucocorticoids in this condition, and the adrenal glands are normal on imaging. Clumps of adrenal cells termed adrenal rests can also descend with the testis into the scrotum and be metabolically active and induce virilization. Adrenal rests are more likely to become active in cases of CAH in which there is excessive adrenal stimulation and can present as testis or peritestis enlargement. Even more rare are teratomatous rests in the scrotum that secrete excessive amounts of chorionic gonadotropin (hCG) that is similar to the gonadotropin LH and stimulates androgen production. These rests are highly malignant and are associated with growth of the contralateral testis as a result of gonadotropic-like stimulation. 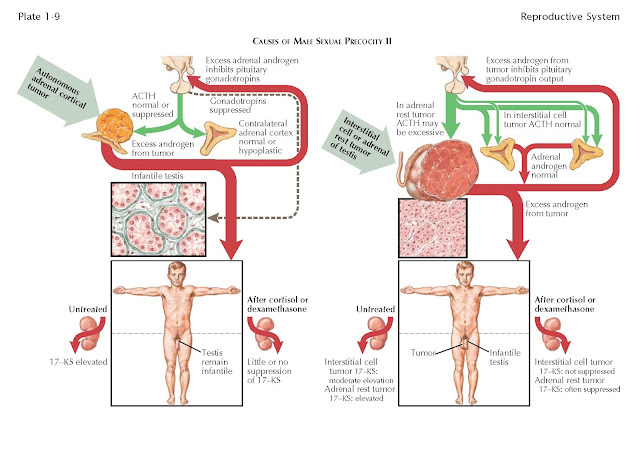 PUBERTY ABNORMALITIES IN FEMALES
Delayed puberty may occur for several years and then proceed normally in what is referred to as constitutional delay. It may also be due to poor nutrition from anorexia, extreme athleticism, and systemic disease such as chronic renal failure, hypothyroidism, and Cushing syndrome. Reproductive disorders such as Kallmann syndrome or Prader-Willi syndrome, gonadal defects characteristic of Turner syndrome, or a lack of response to sex steroids associated with androgen insensitivity disorders (in a genetic male) may also occur (Plate 1-10). Turner syndrome or Ullrich Turner syndrome (a form of gonadal dysgenesis) occurs when one of the two female X chromosomes is constitutionally missing.
When only a part of the X chromosome is missing, mosaic Turner syndrome may be present. Because this syndrome only affects the second X chromosome, the syndrome is only present in females. Occurring in 1 of every 2500 girls, the syndrome presents with characteristic physical abnormalities, such as short stature, broad chest, low hairline, low-set ears, and webbed neck. Girls with Turner syndrome typically have gonadal dysfunction (nonworking ovaries) that results in amenorrhea and sterility. Other health concerns include con- genital heart disease, hypothyroidism, diabetes, vision and hearing problems, and autoimmune disease. Finally, there is also a characteristic pattern of cognitive deﬁcits observed, with difﬁculties in visuospatial, mathematic, and memory areas. Rarely, cystic ﬁbrosis and Frasier syndrome can result in delayed puberty.
There are two benign variants of sexual precocity in females: premature thelarche (benign mammoplasia) and premature pubarche. In the former, there is isolated premature development of breast tissue and in the latter, isolated pubic hair. Both may be associated with childhood obesity. True sexual precocity is usually due to central (nervous system) or ovarian causes (Plate 1-11). Adrenal tumors or hyperplasia in the female most commonly causes virilization and not true sexual precocity. Idiopathic sexual precocity is more common in girls than boys and presents with advanced stature and bone age, breast enlargement, vaginal wall thickening, pubic hair, and acne. Axillary hair is rarely found but adult perspiration odors can be obvious. In addition, uterine enlargement can occur and irregular menstrual bleeding is possible. Central stimulation by gonadotropins can also result in large follicular cysts in the ovary, which may be difﬁcult to distinguish from primary ovarian tumors. Spontaneous remission of idiopathic sexual precocity is not uncommon. 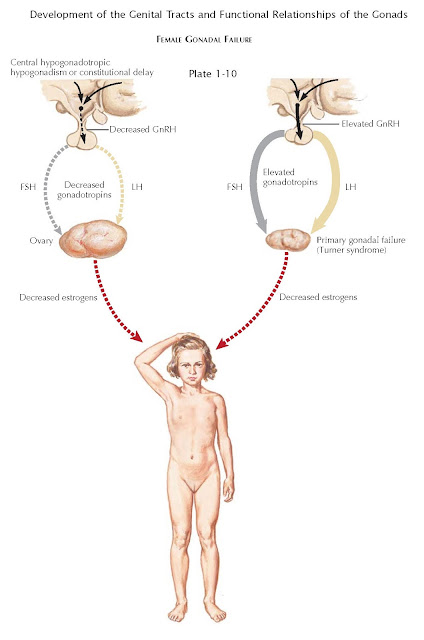 McCune–Albright syndrome, caused by a sporadic mutation in the GNAS1 gene, is a special form of central precocity that is associated with polyostotic ﬁbrous dysplasia, a nonmetabolic skeletal disorder in which scar forms in bone that can lead to deformities and fractures (Plate 1-11). In this condition, sexual precocity is combined with lesions in the long bones and café au lait spots that stop at the midline. Thyroid enlargement is common, often with thyrotoxicosis. Affected girls may also have frontal bone and zygomatic arches, features characteristic of acromegaly, and polycystic ovaries and hirsutism. Primary hypothyroidism can present with breast enlargement, early menstruation, and galactorrhea. These symptoms regress when thyroid replacement is given and suggest that pituitary gonadotropin hyperstimulation may be associated with excess thyroid-stimulating hormone (TSH) stimulation.
Feminizing tumors of the ovary are a relatively common cause of sexual precocity in girls (Plate 1-11). Granulosa-theca cell tumors, more commonly known as granulosa cell tumors, belong to the sex cord–stromal group and include tumors made up of granulosa cells, theca cells, and ﬁbroblasts in varying degrees. About 5% of these tumors occur in juveniles and the majority of the rest occur in postmenopausal women. Both types commonly produce estrogen, and estrogen production often is the reason for early diagnosis. Theca cell tumors almost always are benign and carry an excellent prognosis. The rare malignant thecoma likely represents a tumor with a small admixture of granulosa cells. It is not exactly known how these tumors arise but it has been proposed that they are derived from either the mesenchyme of the developing genital ridge or precursors within the mesonephric and coelomic epithelium. Granulosa-theca cell tumors can be large, palpable, and can secrete large amounts of estrogen that causes heavy feminization. Some features of the syndrome, such as the growth of pubic and axillary hair, are attributed to associated pituitary stimulation. Complete tumor resection is mandatory for cure of these symptoms. Rarer, but far more malignant, tumors of the ovary that can cause similar symptoms are progesterone-secreting luteomas and chorionepitheliomas. Exogenous estrogen intake through contaminated medications, foods, cosmetics, or exposure to endocrine disruptors such as bisphenol A and phthalates and estrogenic pesticides may underlie some cases of prior unexplained precocious puberty (Plate 1-11). Bisphenol A is an organic phenol compound that has been used primarily to make plastics for more than 50 years. It is used to make polyesters, plasticizers, polycarbonate and epoxy resins, and is found in baby and water bottles, sports equipment, medical and dental devices, dental ﬁllings and sealants, eyeglass lenses, CDs and DVDs, and household electronics. Although good-quality human studies are currently lacking, animal studies have shown that excessive exposure to bisphenol A may be related to changes in anogenital distance, early puberty, changes in breast tissue that may predispose to carcinogens, and decreased maternal behavior. Phthalates are a class of widely used industrial compounds known technically as alkyl aryl esters and are used as softeners of plastics, oily additives in perfumes, additives to hairsprays, lubricants, and wood ﬁnishers, and they hav been linked to premature breast development in girls. 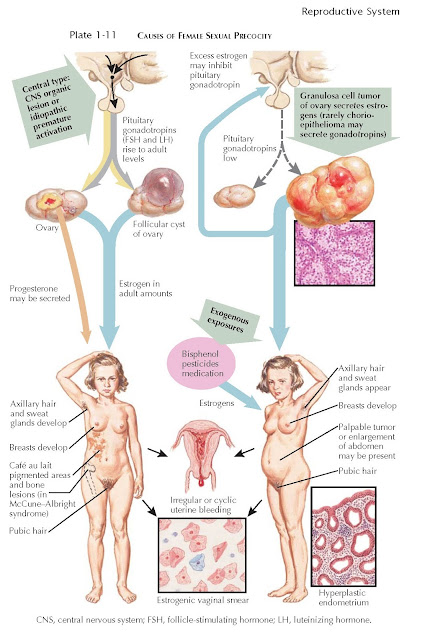