CELL STRUCTURE EXPLAINED
There are around 75 trillion cells in the human body, but what are they and how do they work?
Cells are life and cells are alive. You are here because every cell inside your body has a specific function and a very specialised job to do. There are many different types of cell, each one working to keep the body’s various systems operating. A single cell is the smallest unit of living material in the body capable of life. When grouped together in layers or clusters, however, cells with similar jobs to do form tissue, such as skin or muscle. To keep these cells working, there are thousands of chemical reactions going on all the time.


All animal cells contain a nucleus, which acts like a control hub telling the cell what to do and contains the cell’s genetic information (DNA). Most of the material within a cell is a watery, jelly-like substance called cytoplasm (cyto means cell), which circulates around the cell and is held in by a thin external membrane, which consists of two layers. Within the cytoplasm is a variety of structures called organelles, which all have different tasks, such as manufacturing proteins – the cell’s key chemicals. One vital example of an organelle is a ribosome; these numerous structures can be found either floating around in the cytoplasm or attached to internal membranes. Ribosomes are crucial in the production of proteins from amino acids.
In turn, proteins are essential to building your cells and carrying out the biochemical reactions the body needs in order to grow and develop and also to repair itself and heal. 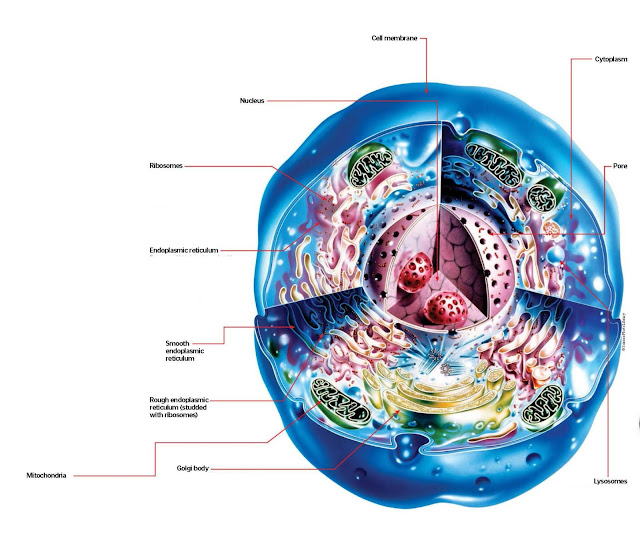 Cell anatomy
Cell membrane : Surrounding and supporting each cell is a plasma membrane that controls everything that enters and exits.
Nucleus: The nucleus is the cell’s ‘brain’ or control centre. Inside the nucleus is DNA information, which explains how to make the essential proteins needed to run the cell.
Ribosomes: These tiny structures make proteins and can be found either floating in the cytoplasm or attached like studs to the endoplasmic reticulum, which is a conveyor belt-like membrane that transports proteins around the cell.
Endoplasmic reticulum The groups of folded membranes (canals) connecting the nucleus to the cytoplasm are called the endoplasmic reticulum (ER). If studded with ribosomes the ER is referred to as ‘rough’ ER; if not it is known as ‘smooth’ ER. Both help transport materials around the cell but also have differing functions.
Mitochondria These organelles supply cells with the energy necessary for them to carry out their functions. The amount of energy used by a cell is measured in molecules of adenosine triphosphate (ATP). Mitochondria use the products of glucose metabolism as fuel to produce the ATP.
Golgi body Another organelle, the Golgi body is one that processes and packages proteins, including hormones and enzymes, for transportation either in and around the cell or out towards the membrane for secretion outside the cell where it can enter the bloodstream.
Cytoplasm This is the jelly-like substance – made of water, amino acids and enzymes – found inside the cell membrane. Within the cytoplasm are organelles such as the nucleus, mitochondria and ribosomes, each of which performs a specific role, causing chemical reactions in the cytoplasm.
Lysosomes This digestive enzyme breaks down unwanted substances and worn-out organelles that could harm the cell by digesting the product and then ejecting it outside the cell.