pediagenosis    June 10, 2020    Organ , Urinary
POSTINFECTIOUS GLOMERULONEPHRITIS
Postinfectious glomerulonephritis (PIGN) is a syndrome of glomerular injury that occurs as a result of the immune system’s response to certain infections. The archetypal example is poststreptococcal glomerulonephritis (PSGN), an acute nephritis that develops following streptococcal infections of the skin or throat, and among the oldest described nephrologic diseases. Many infections can cause PIGN, but the unifying feature is immune complex depositi n in the glomerulus that triggers inﬂammatory injury. 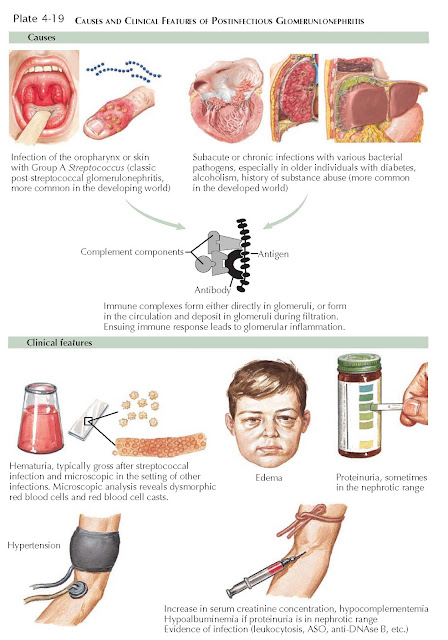 PATHOPHYSIOLOGY
A variety of bacteria, fungi, viruses, and parasites have been speciﬁcally associated with certain patterns of glomerular injury, including membranoproliferative glomerulonephritis (see Plate 4-22) and membranous nephropathy (see Plate 4-12).
Most clinically evident PIGN, however, results from bacterial infections. Classically, PIGN occurs in children after infection of the skin or oropharynx with speciﬁc nephritogenic strains of Group A Streptococcus (GAS). Although this picture remains true in the developing world, recent series from developed countries show Staphylococcus spp. now equaling or outnumbering Streptococcus spp. as the most common cause of PIGN. In addition, as many as one third to one half of cases are caused by Gram-negative organisms. Furthermore, those at risk are no longer children but rather adults over the age of 40, often with medical comorbidities such as diabetes and alcoholism. These epidemiologic shifts are most likely due to widespread availability and use of antibiotics for the treatment and prophylaxis of bacterial pharyngitis.
While the full pathogenesis of PIGN is incompletely understood, it is known to occur in only a minority of patients infected with recognized nephritogenic organisms. This observation implies that host susceptibility factors play a crucial role, in addition to speciﬁc traits of the infectious organisms themselves.
Fundamentally, nephritogenic infections present certain pathogenic antigens to the immune system, which responds by generating antibodies and forming immune complexes. These complexes may either form in the circulation and then deposit in the glomerulus during ﬁltration, or they may form in the glomerulus in situ. Classically, immune complex deposits are found in the subepithelial space. The complexes activate complement (especially the alternative pathway) and lead to the recruitment of inﬂammatory cells (such as macrophages) to the glomerulus, producing immunemediated damage.
One postulated mechanism underlying this process is molecular mimicry, in which the infectious organism presents antigens that, by coincidence, are structurally similar to normal components of the glomerular ﬁltration barrier, such as laminin or collagen. Consequently, the immune response against the organism becomes inadvertently directed against the glomerulus as well.
Another potential mechanism for immune complex formation is that the infectious organism produces speciﬁcally nephritogenic antigens that bind to the glomerular capillary wall and activate an immune response. In the case of PSGN, two proteins produced by streptococci bear special mention: nephritis-associated streptococcal plasmin receptor (NAPlr) and streptococcal cationic proteinase exotoxin B (SpeB). NAPlr is thought to bind to glomeruli, where it captures plasmin and leads to activation of the alternative complement pathway. SpeB, with its zymogen precursor zSpeB, is an exotoxin produced by Streptococcus pyogenes that also binds plasmin and can activate leukocytes. One series of patients with PSGN reported the presence of glomerular deposits containing SpeB in 12 of 17 biopsies, and circulating antibodies to SpeB in all patients (53 of 53). 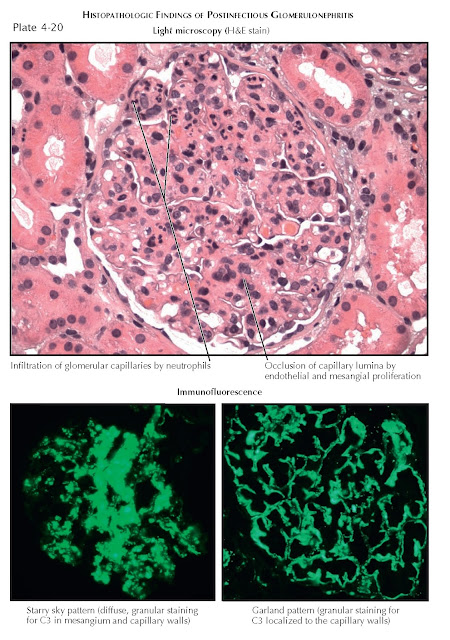 PRESENTATION AND DIAGNOSIS
The clinical manifestations of PIGN are variable and depend on characteristics of both host and pathogen. Poststreptococcal disease (PSGN) classically presents as a child aged 5 to 12 who develops gross hematuria 1020 days after a bout of pharyngitis or pyoderma. It typically causes an acute nephritic syndrome, with microscopic or gross hematuria, proteinuria, and hypertension. Often, facial edema and a mild decrease in renal function are seen as well. Occasionally the proteinuria is severe enough to cause nephrotic syndrome. In less than 1% of cases, rapidly progressive glomerulonephritis occurs, leading to severe renal failure that requires dialysis. When confronted with a child who has gross hematuria following an upper respiratory infection (URI), the crucial differential is between PSGN and IgA nephropathy (IgAN), which can have similar presentations. The key to diagnosis comes from the history and lies in the latency period between pharyngitis and hematuria; for PSGN, it usually takes 10 to 14 days for the hematuria to develop (or even 3 weeks following skin infection), whereas in IgAN hematuria occurs within 5 days of URI. Patients with IgAN may also report having similar hematuric episodes in the past.
As opposed to “classic” PSGN, PIGN in the developed world most commonly occurs in older individuals with subacute or chronic infections (acute and subacute bacterial endocarditis, pulmonary infections, visceral abscesses, infected ventriculoatrial shunts) who have signiﬁcant medical comorbidities, especially those causing immune compromise (such as diabetes, malignancy, and substance abuse). These infections frequently require prolonged courses of treatment, and renal abnormalities often develop before the infection is entirely eradicated. Microscopic hematuria is present in up to 90%, with greater than 1 g/day proteinuria in roughly 4 of 5 patients, and the full nephrotic syndrome in about a quarter of patients. Unlike in PSGN, however, gross hematuria is rare.
Further laboratory testing can help narrow the diagnosis to PIGN. PIGN is one of the glomerulonephritides, for example, in which serum complement levels are low (the others being lupus nephritis, MPGN, and cryoglobulinemic GN). Hypocomplementemia is present in 60% to 70% of patients with PIGN, and closer to 90% of patients with PSGN. Typically C3 is signiﬁcantly depressed, whereas C4 is only slightly depressed or normal, which suggests activation of the alternate complement pathway. Of note, a child with presumed PSGN and hypocomplementemia whose complement levels do not return to normal within 8 to 12 weeks should be evaluated for MPGN.
The speciﬁc diagnosis of PSGN is supported by serologic evidence of recent streptococcal infection. Several different antistreptococcal antibodies can be measured. The most common is the antistreptolysin O titer (ASO). Although this assay is highly sensitive for recent streptococcal pharyngitis, it will be negative following 50% of streptococcal skin infections. Anti-DNAse B antibody, in contrast, is less sensitive for pharyngeal infections but is 90% sensitive for recent streptococcal skin infections. The diagnosis of PSGN can often be made clinically without a kidney biopsy, especially in children with a typical course. Indications for biopsy might include repeated negative testing for antistreptococcal serologies, persistent renal insufﬁciency, persistent proteinuria, or hypocomplementemia beyond 8 to 12 weeks.
In adults with suspected PIGN, however, the picture is often clouded by the presence of medical comorbidities, comorbid renal disease, and medication or antibiotic use. Many other types of glomerular disease may be possible depending on the history, such as diabetic nephropathy, membranous nephropathy related to malignancy, or reactive amyloidosis. Older patients with atheroemboli may also have depressed complement levels and hematuria. Antibiotics used to treat active infections may cause acute interstitial nephritis or toxic tubular injury. For these reasons, a kidney biopsy becomes invaluable for elucidating the diagnosis.
Several different histologic ﬁndings may be present in PIGN, and the diagnosis can usually be made using light microscopy and immunoﬂuorescence. On light microscopy, PIGN classically causes diffuse hypercellularity involving all of the glomeruli, with the capillary lumina obscured by endothelial proliferation, mesangial proliferation, and inﬁltration by monocytes and neutrophils. Silver stain may reveal characteristic postinfectious humps in the subepithelial space. These humps represent deposits of immune complexes that include complement and immunoglobulins. Immunoﬂuorescence usually shows granular deposition of C3 and IgG, and occasionally IgM. This staining may follow the capillary wall (“garland”) or it may be more diffuse (“starry sky.”) Electron microscopy will show large dome-shaped humps in the subepithelium, and it may also show small immune complexes in the mesangium and subendothelium.
In the rare cases when acute PIGN leads to rapidly progressive glomerulonephritis, histology will show disruption of the glomerular basement membrane and the formation of cellular crescents. This presentation appears to occur more frequently with Staphylococcus aureus infections.
It must be noted that many people experience asymptomatic or subclinical urinary abnormalities (low-level proteinuria, pyuria, and microscopic hematuria) following trivial or self-limited bacterial or viral infections. Although the exact frequency is difﬁcult to determine, at least one series of patients with GAS pharyngitis revealed 24% to have subclinical glomerulonephritis by urinalysis, and almost all had corresponding abnormalities (i.e., mild mesangial proliferation or hypercellularity) on kidney biopsy. An older, larger series in children found that subclinical disease was 20 times more likely than overt glomerulonephritis. These observations support the notion that a large proportion of mild and transient PIGN goes unrecognized. 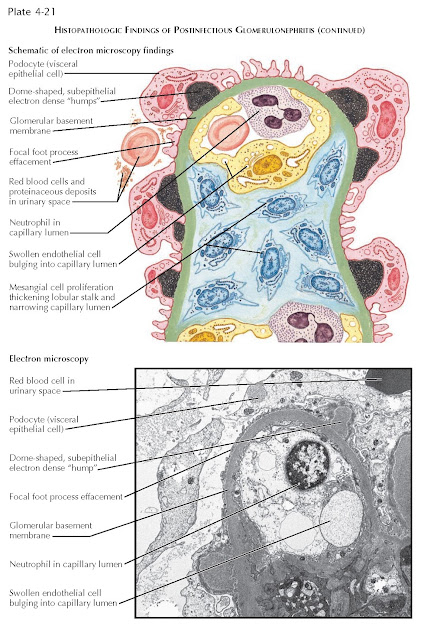 TREATMENT
There is no speciﬁc treatment for PIGN other than removing the trigger for autoimmune attack. Here the term “postinfectious” can be dangerously misleading because, as previously stated, the renal disease often begins during the course of a chronic infection. To limit the inﬂammatory process, the infection must be identiﬁed and eradicated. A biopsy that shows PIGN with no previously suspected source should prompt a thorough investigation for occult sources of infection, including blood cultures to evaluate for subacute bacterial endocarditis, a careful dental examination, and evaluation of any indwelling foreign bodies such as ventriculoatrial shunts, vascular grafts, or pacemaker wires. Meanwhile, any person diagnosed with PSGN should be treated with a full course of antibiotics to eliminate any residual infection.
Unfortunately, PIGN may progress despite eradication of infection, especially in the setting of infection with S. aureus or Brucella. In such cases, immunosuppressive treatment is sometimes attempted. Similarly, in crescentic PIGN there has been anecdotal use of corticosteroids and or cytotoxic agents with some success. No highquality clinical trials, however, have been performed.
A separate issue is the question of routine antibiotic treatment of pharyngitis to prevent the development of PSGN. Because the majority of pharyngitis cases are not caused by GAS, and because even GAS pharyngitis usually has a benign course, empiric antibiotics are discouraged. Several useful clinical decision algorithms to predict the likelihood of bacterial pharyngitis and guide antibiotic therapy have been proposed, such as the Centor criteria. Indeterminate scores should not be treated with antibiotics unless there is a positive rapid streptococcal antigen test or a positive throat culture. The exception is for epidemics of GAS, where close contacts to infected cases should receive prophylactic treatment with penicillin.

PROGNOSIS
The prognosis for PIGN varies according to age and comorbidities. The prognosis for children with PSGN is excellent; nephritic symptoms usually begin to improve within a week of presentation, and full recovery is the norm. Approximately 20% of children may have persistent urinary abnormalities over the long term (5 to 18 years), but impaired glomerular ﬁltration is uncommon.
In adults, the prognosis is much worse, likely in large part due to the underlying comorbidities and chronic infections that predispose to PIGN. Only about half of patients will achieve complete remission of their renal disease. Poor prognostic indicators include age over 60 years, nephrotic-range proteinuria, “garland” immunoﬂuorescence pattern, and crescentic glomerulonephritis. Especially poor outcomes occur in patients with underlying diabetic glomerulosclerosis, with one study reporting all affected patients having permanently impaired renal function and more than 80% reaching ESRD during a mean follow-up of 19 months.