Enteric gram-negative bacteria (GNB) are an uncommon cause of CAP but have been reported in up to 10% of patients, particularly those with severe community-acquired pneumonia (CAP) admitted to the intensive care unit. The enteric GNB that have been reported to cause CAP are Klebsiella pneumoniae, Pseudomonas aeruginosa, Enterobacter spp., Escherichia coli, Serratia marcescens, and Acinetobacter spp. (which have been particularly prevalent in Asia and in war veterans from the Persian Gulf region). With the separation of patients with health care–acquired pneumonia (HCAP) from those with CAP, the frequency of GNB CAP may be quite low because many of the risk factors for these organisms place the patient in the HCAP category. Identiﬁed risks for GNB in CAP include pulmonary comorbidity (particularly severe chronic obstructive pulmonary disease, those treated with corticosteroids, and patients with bronchiectasis), probable aspiration, prior hospitalization, and prior antibiotics. These last two risk factors often are present in patients with HCAP. Patients who reside in nursing homes may also be commonly infected with these organisms, but these patients would be classiﬁed as having HCAP. Patients with GNB CAP have a higher mortality rate than patients with other forms of CAP. These organisms are commonly associated with septic shock and hyponatremia, and patients may have underlying malignancy, cardiovascular disease, and a smoking history. As discussed below, GNB are a common cause of hospital-acquired pneumonia (HAP), particularly ventilator-associated pneumonia (VAP), where they account for the majority of patients with an established etiologic diagnosis. More details about P. aeruginosa are provided in the section on HAP.

Klebsiella pneumoniae is an encapsulated gram-negative rod that can also cause both CAP and HAP, as well as lung abscess. It usually is acquired by micro- or macroaspiration from a previously colonized oropharynx. The histologic picture is one of a peripheral zone of edema, with central consolidation. The organism differs from other CAP pathogens because it can often lead to necrotizing pneumonia with cavitary inﬁltrates and abscess formation. Known as Friedländer pneumonia, after the physician who ﬁrst observed this illness, patients are predominantly male and usually middle-aged or older, with alcoholism being the most common coexisting condition. 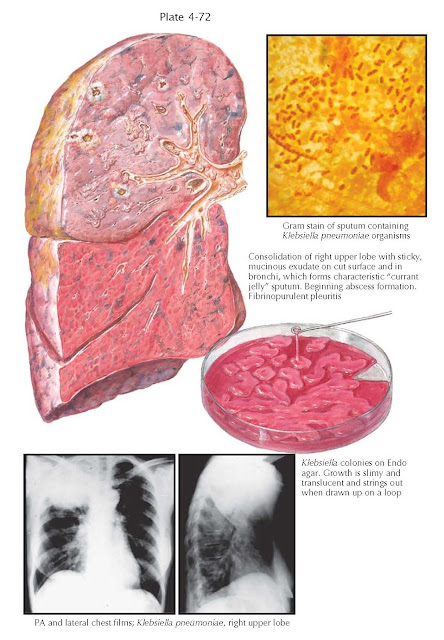 When CAP is caused by K. pneumoniae, the illness is usually of sudden onset, with productive cough, pleuritic chest pain, rigors, and cardiovascular collapse in a patient who has underlying chronic illness. The cough is usually associated with sputum that is often thick and purulent with blood (reﬂecting necrosis), or the sputum can be thin with a “currant jelly” appearance. On physical examination, the patient is usually toxic appearing, with high fever and tachycardia, and has ﬁndings of lobar consolidation. Although not common or speciﬁc, the classic radiographic ﬁnding is a bulging upper lobe ﬁssure, usually on the right side, representing lobar consolidation with bulging downward because of the dense inﬁltrate. Lung abscess and bronchopneumonia may also occur as primary presentations, but lung abscess can complicate pneumonia, as can pericarditis, meningitis, and empyema. The lung abscess syndrome associated with K. pneumoniae differs from that seen with anaerobic bacteria. Compared with anaerobic lung abscess, the illness is more acute, sputum is not putrid smelling, multiple cavities are often present, and underlying diabetes is more common.

The diagnosis is made by ﬁnding gram-negative rods in a sputum Gram stain and culture in a patient with appropriate risk factors and clinical features. Therapy is usually for 10 to 14 days, depending on clinical response, often with two drugs that are active against the organism, to ensure efﬁcacy and to avoid emerging resistance during therapy. Third-generation cephalosporins should not be used as monotherapy because they can select for the development of resistant organisms with inducible chromosomal β-lactamases. Effective antimicrobial agents include an aminoglycoside, an antipseudomonal penicillin or fourth–generation cephalosporin, aztreonam, a carbapenem, or sometimes a ﬂuoroquinolone. In some hospitals, epidemics of nosocomial infection caused by carbapenemase-producing K. pneumoniae have been described; therapy of patients infected with these organisms is challenging and often unsuccessful.