This traffic of lymphocytes throughout the body enables these antigen‐specific cells to seek “their” antigen and to be deployed to sites at which a response is required. When antigen reaches a lymph node in a primed animal, there is a dramatic fall in the output of cells in the efferent lymphatics, a phenomenon described variously as “cell shutdown” or “lymphocyte trapping.” This process involves a reduced responsiveness of lymphocytes to sphingosine 1‐phosphate (S1P), a molecule that signals lymphocytes to exit the lymph node. The shutdown phase is followed by an output of activated cells that peaks at around 80 hours.

Naive lymphocytes can enter a lymph node either in the lymphatic fluid (lymph) draining into the node via the afferent lymphatics or by exiting from the bloodstream across the specialized high‐walled endothelium of the postcapillary venules (HEV) (Figure 6.13). If arriving via the HEV, their entry is determined by a series of homing receptors on the lymphocyte that include the integrin superfamily member LFA‐1 (αLβ2, Table 6.1), the selectin family member L‐selectin, and the chemokine receptor CCR7. Their ligands on the endothelium act as vascular addressins. Thus, L‐selectin recognizes LewisX oligosaccharide structures present on a variety of glycoproteins on the HEVs (including GlyCAM‐1 and CD34) and generally referred to as peripheral node addressins (PNAd) (Figure 6.3). Chemokines presented by vascular endothelium play a key role in triggering lymphocyte arrest, the chemokine receptors on the lymphocyte being involved both in binding to their ligand and in the functional activation of integrins.

Figure 6.13 High‐walled endothelial venule (HEV). Scanning electronic micrograph of rat mesenteric lymph node showing loosely packed lymphocytes around an HEV (blue) and lymphatic vessels (yellow). (The black hole at the top of the HEV is an artifact where a tributary of the HEV was lost during preparation.) The lymph node was sliced with a vibratome that removes many of the free lymphocytes from the lumen of the HEV and the lymphatic vessels. Scale bar = 20 μm.

Therefore, naive lymphocytes, and also dendritic cells, by expressing the CCR7 chemokine receptor are directed into peripheral lymph nodes because the HEVs in the nodes display the chemokines CCL19 and CCL21 (see Table 8.2) on their luminal surface. While CCL21 is produced by the endothelial cells themselves, CCL19 is secreted by the network of fibroblastic reticular cells (FRCs) within the lymph node and subsequently transferred to the HEV. The plt/plt mouse, which lacks expression of both of these chemokines, not unsurprisingly exhibits defective T‐cell migration into peripheral lymph nodes. Chemokine activation of integrins occurs as a result of the chemokine signals facilitating their lateral mobility in the cell membrane and also by inducing structural changes in the integrins that increases their affinity for their ligands. 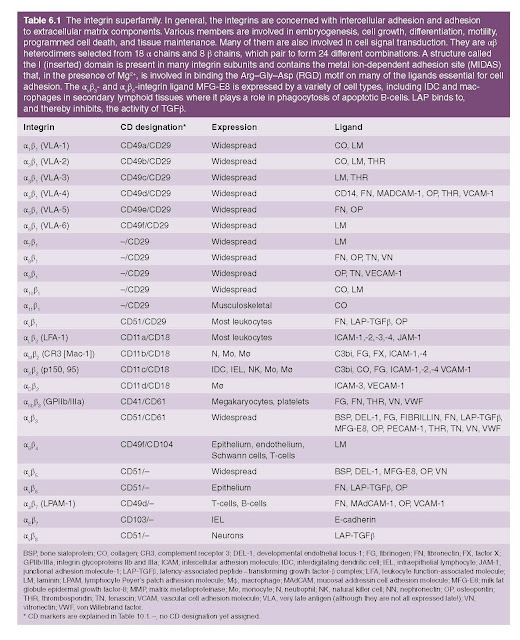 In order for the lymphocyte to become attached to the HEV, it has to overcome the shear forces created by the blood flow. This is effected by the forces of attraction between the homing receptors and their ligands on the vessel wall that operates through microvilli on the leukocyte surface (Figure 6.14). After this tethering process, the lymphocyte rolls along the HEV, with L‐selectin and other adhesion molecules on the lymphocyte binding to their ligands on the endothelium. The selectins generally terminate in a lectin domain (hence “selectin”), as might be expected given the oligosaccharide nature of the ligands.

Figure 6.14 Homing and transmigration of lymphocytes into peripheral lymph nodes. Fast‐moving lymphocytes are tethered (Stage 1) to the vessel walls of the tissue they are being guided to enter through an interaction between specific homing receptors, such as L‐selectin (green dots) located on the microvilli of the lymphocyte, and its peripheral node addressin (PNAd) ligands on the vessel wall. PNAd comprises several molecules, including CD34 and GlyCAM‐1, which possess fucosylated, sulfated and sialylated LewisX structures. Various chemokine receptors (red dots) are also present on these T‐ and B‐cells. After rolling along the surface of the endothelial cells, activation of the lymphocyte LFA‐1 integrin (blue dots) (see Table 6.1) occurs (Stage 2) in response to stimulation by chemokines. For T‐cells this stage is mainly regulated by CCL19 and CCL21 binding to CCR7 as shown, whereas for B‐cells CXCL13 binding to CXCR5 provides additional signals. Note that, because LFA‐1 is absent from the microvilli, firm binding occurs by the body of the lymphocyte to its ligands, ICAM‐1/2, on the endothelium. This process results in cell arrest and flattening followed by migration of the lymphocyte between adjacent endothelial cells, a process referred to as diapedesis (Stage 3), which involves LFA‐1 binding not only to ICAM‐1/2 but additionally to the junctional adhesion molecule‐1 (JAM‐1), which is present between the endothelial cells.

The process of tethering and rolling leads to the recruitment of the LFA‐1 integrin to the nonvillous surface of the lymphocyte. This integrin undergoes structural activation in response to chemokine signals, resulting in very strong binding to ICAM‐1 and ‐2 on the endothelial cell. The intimate contact causes the lymphocyte rolling to be arrested and a flattening of the lymphocyte.

Lymphocyte homing to other tissues

Homing of activated and memory lymphocytes to other tissues, such as the liver, involves a similar process but with different receptors and ligands involved (Figure 6.3). Dendritic cells from the appropriate tissue play an important role in selectively imprinting the correct address code during their activation of naive T‐cells. Cells concerned in mucosal immunity are imprinted to enter Peyer’s patches by binding to HEVs in this location. In other cases involving migration into normal and inflamed tissues, the lymphocytes bind to and cross nonspecialized flatter endothelia.

It is essential that once activated in secondary lymphoid tissues the lymphocytes of appropriate antigen specificity can rapidly be deployed to the site of the infection. The upregulated expression of the VLA‐4 and LFA‐1 integrins on these activated antigen‐specific cells permits them to detect, respectively, the VCAM‐1 and ICAM‐1 cell adhesion molecules that become expressed on vascular endothelium in response to IL‐1 production in inflamed tissues.