Pseudoxanthoma elasticum is a rare genetic disorder with both cutaneous and systemic findings. It is inherited in an autosomal recessive manner. This disease is caused by a defect in an adenosine triphosphate (ATP) binding protein that is found in many tissues, including the skin, eye, gastrointestinal tract, and cardiovascular systems. The cutaneous findings often precede the appearance of the systemic findings. Recognition of the cutaneous findings can help lessen the risk of systemic complications. A multidisciplinary approach to the care of these patients is required. The skin findings have no bearing on mortality. 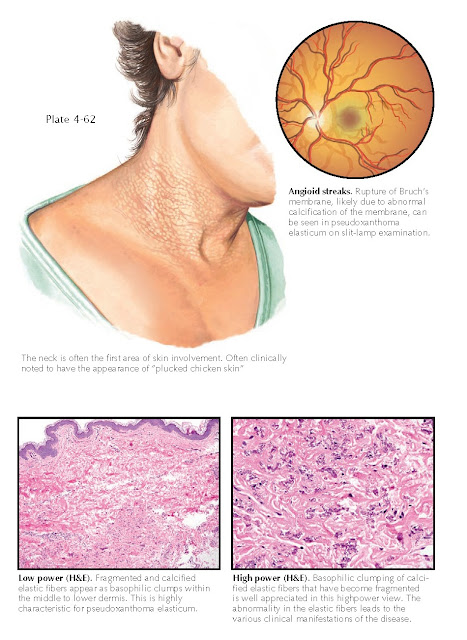 Clinical Findings: Pseudoxanthoma elasticum manifests in late childhood or early adulthood. The cutaneous findings are almost always the first sign of the disease. The skin on the neck is most commonly affected early and most severely. There is a “plucked chicken” appearance to the skin. Small yellow papules are studded within the involved region, and over time they coalesce into larger, symmetric plaques. The intervening skin has a dull appearance with a fine pebbly texture. The neck is by far the area most noticeably affected, but other regions may become involved, including the intertriginous regions. A rare generalized cutaneous form has been reported. The mucous mem- branes may also become involved with tiny yellow papules. As time progresses, the skin may become loose, appearing to hang from the body, and this can be a significant cosmetic concern to the patient. The areas of cutaneous involvement are essentially asymptomatic. On occasion, mild pruritus is reported. A nonspecific skin finding that is seen with increased frequency in pseudoxanthoma elasticum is elastosis perforans serpiginosa. This perforating disorder has been described to occur in many different clinical settings, and it is caused by the transepidermal elimination of damaged elastic tissue. The reason this occurs in pseudoxanthoma elasticum is unknown.

It is important to diagnosis this disease at a young age so that some of the severe systemic complications can be prevented. The globe is affected in pseudoxanthoma elasticum. The first sign is a yellowish discoloration of the retina. Later in life, cracks or ruptures in Bruch’s membrane can be seen on funduscopic examination; these are termed angioid streaks. Angioid streaks have a later age at onset than the cutaneous findings do. Abnormalities of the elastic fibers in Bruch’s membrane are responsible for their formation. Angioid streaks can be seen in many disorders of connective tissue and are not specific for pseudoxanthoma elasticum. Retinal hemorrhage and resultant visual field loss is the most severe ophthalmological complication.

Cardiovascular and gastrointestinal manifestations arise because of the abnormal calcification of elastic tissue within blood vessel walls. Gastrointestinal hemorrhage may occur and may be life-threatening. Angina and hypertension may occur from involvement of the coronary and renal arteries, respectively.

Histology: Findings on skin biopsies are very characteristic and show abnormal fractured, calcified elastic tissue within the dermis. The findings can be accentuated with special staining methods to highlight the calcified elastic fibers. However, the diagnosis can be made easily on routine hematoxylin and eosin staining.

Pathogenesis: Pseudoxanthoma elasticum is inherited in an autosomal recessive fashion and is caused by a defect in the ABCC6 gene. This gene is responsible for encoding the multidrug resistance associated protein 6 (MRP6), which is also known as ATP-binding cassette transporter 6 (ABCC6). This protein is found within the liver and kidneys and is expressed at low levels in the tissues that are affected by this disease. It has been proposed that the defect causes a metabolic abnormality, possibly resulting in a buildup of a metabolite that damages to the elastic fibers in the affected tissue.

Treatment: Therapy is directed at preventive care. Routine cardiovascular and ophthalmological examinations can help keep hypertension and early signs of retinal disease in check. Retinal hemorrhages need to be treated acutely by an ophthalmologist. Routine examinations for blood in the stool and routine gastrointestinal examinations are warranted to screen for gastro- intestinal bleeding, which is the main cause of morbidity and mortality in these patients. Patients should be encouraged to stay within a healthy weight range and not to smoke. Most patients live a normal life span.