Seborrheic dermatitis is a commonly encountered rash with a bimodal age distribution. There is an infantile and an adult form. The two forms do not resemble each other clinically and are distinct in appearance. The infantile form has also been named “cradle cap” because of its prominent location on the scalp. The adult form has been found in association with many underlying conditions, although it is most commonly seen as an isolated skin finding. 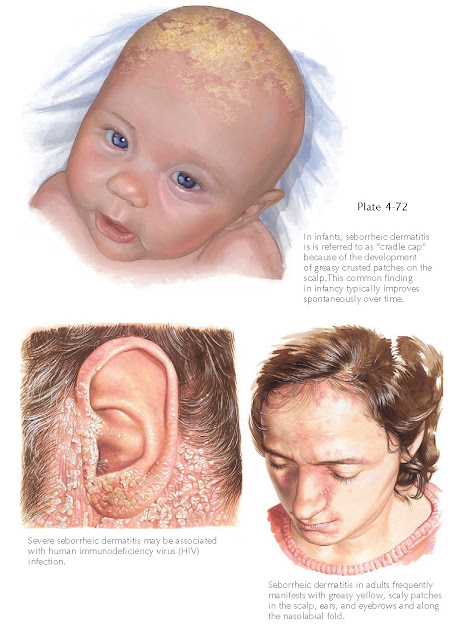 Clinical Findings: The infantile form of seborrheic dermatitis manifests in the first weeks of life and lasts a few months at most. It affects males and females equally, and there is no racial predilection. The most usual location of involvement is the scalp. Most cases are mild and do not cause the parents to seek the advice of a medical professional. These mild cases manifest with a fine scale that may be slightly greasy or adherent. The child is unaware of the dermatosis, and it resolves spontaneously. Rarely, an infant develops greasy yellow, scaly patches and even plaques across the entire scalp (cradle cap). The dermatitis may become more inflamed, and weeping from the patches or plaques may ensue. The infant may try to scratch at the areas, indicating that pruritus is present. In these severe cases, weeping patches and plaques may also be seen in the groin and axillary folds. Only in the most exceptional of cases does the rash disseminate, but it has the ability to affect any region of the body.

The adult version is chronic in nature and affects a higher percentage of people than does the infantile form. Because of its chronicity, patients often seek medical advice. There is also quite a bit of clinical variability in adult seborrheic dermatitis. The face is the most commonly involved site, with a predilection for the nasolabial fold, eyebrows, ears, and scalp. It has a strikingly similarity to patches in other locations on the skin. Most cases are mild and consist of greasy yellow to slightly red, scaly patches. The scalp involvement is similar in appearance. Seborrheic dermatitis has a propensity to affect the areas of the skin that have a high density of sebaceous glands. On occasion, patients have not only facial involvement but signs of involvement on areas of the upper chest and back.

Pathogenesis: The exact pathogenesis is unknown. Seborrheic dermatitis is believed to be caused  by an interaction of various components of the skin, including the production of sebum, with the normal skin immune system response to the fungus, Malassezia furfur. The role that each of these factors plays in the formation of seborrheic dermatitis is not completely understood.

Histology: Seborrheic dermatitis is almost never biopsied to confirm the diagnosis. Classic biopsy specimens show parakeratosis overlying a slightly spongiotic epidermis with a mild lymphocytic perivascular infiltrate in the dermis. Spores of fungus can be seen lying on the surface of the epidermis.

Treatment: Most cases of infantile seborrheic dermatitis can be ignored or treated with nothing more than daily baths and a bland emollient. More involved cases can be treated with more frequent shampooing of the scalp and the use of a mild topical corticosteroid. The use of ketoconazole cream has also been advocated in some cases.

Because of its chronic nature, adult seborrheic dermatitis is treated with topical ketoconazole as a first-line therapy. The other azole antifungal agents are just as effective. The addition of a weak topical corticosteroid used intermittently can also lead to excellent results. The scalp is most commonly treated with a ketoconazolebased shampoo or a tar- or selenium-based shampoo. There is no cure for seborrheic dermatitis, but most therapeutic regimens, if adhered to, lead to an excellent clinical response.