Coccidioidomycosis is infection by the dimorphic fungi Coccidioides immitis and Coccidioides posadasii. Coccidioides spp. are endemic to the deserts of the southwestern United States and parts of Mexico and Central and South America. Clinical disease ranges from self-limited pneumonia (valley fever) to disseminated disease, especially in immunosuppressed patients.

Coccidioides spp. grow in the mycelial phase a few inches below the surface of the desert soil. With dry conditions, the mycelia fracture into highly infectious single-cell spores (arthroconidia), 3 to 5  in size, that can remain suspended in the air for prolonged periods. On inhalation, an arthroconidium greatly enlarges into a yeastlike spherule, in which endospores evolve. Rupture of mature spherules releases endospores into the infected tissue; each endospore is potentially capable of producing another spherule.

Among persons living in endemic areas, the risk of exposure to Coccidioides spp. is approximately 3% per year, with a seasonal pattern, typically highest in dry periods after a rainy season. Infections may also occur in individuals simply passing through an endemic area. Southern Arizona and California account for 90% of the infections seen in the United States. The increase in population in these areas has resulted in increased rates of new infections to 150,000 per year. Infections are subclinical in more than half with only later development of delayed cutaneous hypersensitivity to coccidioidin.

Clinically signiﬁcant illness can present subacutely, known as valley fever, with respiratory and systemic symptoms often lasting for weeks to months. The most frequent clinical manifestation is community-acquired pneumonia with an incubation period of 1 to 3 weeks. The most common presenting symptoms are chest pain, cough, fever, and fatigue. Arthralgias, erythema nodosum, and erythema multiforme occur occasionally, and hemoptysis suggests the development of cavitary disease.

Chest radiographs may be unremarkable in up to 50% of all patients, even in those with respiratory complaints. Common abnormalities include unilateral or bilateral inﬁltrates and ipsilateral hilar adenopathy. Less frequently, mediastinal adenopathy and pleural effusion are seen. The primary pneumonitis usually clears spontaneously, leaving a residual nodule or a peripheral thin-walled cavity in about 5% of cases. Dissemination is seen in about 1% of patients to any organ but most commonly skin, bones and joints, and the central nervous system. Risk factors for complicated pulmonary disease and dissemination include defects in cellular immunity, as in HIV infection, organ transplantation, or with high-dose glucocorticoids. Pregnant women, especially during the third trimester, and individuals of African or Philippine descent are at increased risk of dissemination. Diabetes mellitus has been associated with slowly resolving pulmonary infection and residual cavitation.

The diagnosis of coccidioidomycosis is often missed because of the nonspeciﬁc clinical presentation and because the diagnosis is not considered. Early speciﬁc diagnosis is important because it reduces unnecessary diagnostic testing, inappropriate antibiotic use, and morbidity from progressive pulmonary or disseminated disease. An absolute diagnosis requires isolation of Coccidioides spp. in culture from respiratory samples; however, growth may take several days to weeks. The propagation of Coccidioides spp. in the clinical laboratory represents a signiﬁcant health risk to laboratory

personnel, who should be notiﬁed when a sample with suspected Coccidioides spp. is sent for processing. Serologic tests are reliable for the diagnosis of coccidioidomycosis except sometimes early in the disease and in immunocompromised hosts. An immunodiffusion assay that detects serum IgG and IgM antibodies to Coccidioides spp. is the most commonly used test, although complement ﬁxation assays are used for testing other body ﬂuids such as cerebrospinal ﬂuid. Most patients lose serologic reactivity within months of an infection, so sustained reactivity indicates residual lesions or active infection. Serial serologic testing is therefore useful to document resolution. 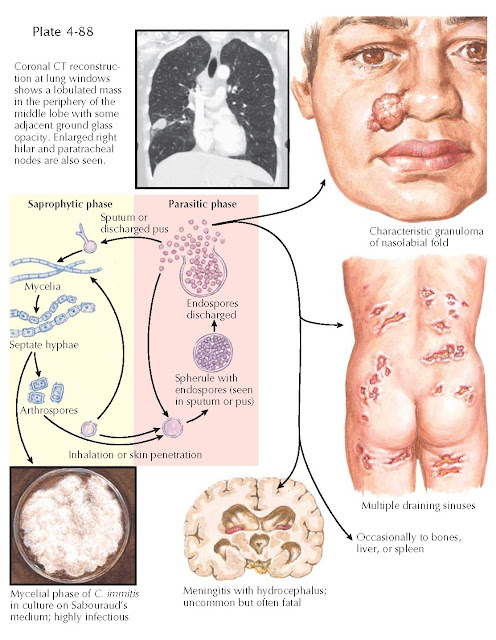 Most patients with uncomplicated pulmonary coccidioidomycosis resolve their infection without speciﬁc antifungal treatment. However, such treatment might beneﬁt some patients, either by shortening the course or by preventing complications. Because of lack of adequate trial data, clinical judgment is used in identifying these patients. Commonly used indicators for treatment include symptoms persisting for more than 2 months, more than 10% loss of body weight, night sweats persisting for more than 3 weeks, inability to work, extensive unilateral or bilateral lung inﬁltrates, prominent or persistent hilar adenopathy, and complement ﬁxing antibody titers above 1 : 16. Treatment is also indicated in patients at risk for or manifesting complicated pulmonary or disseminated disease.

Azole therapy with ketoconazole, ﬂuconazole, or itraconazole for 3 to 6 months is the usual regimen. The latter two agents are better tolerated. Posaconazole and voriconazole may have a role in refractory cases. Intravenous amphotericin B is reserved for rapidly progressive cases or with infection at vital sites such as the spine. After discontinuation of treatment, close follow-up is necessary because of a substantial rate of relapse in up to one-third of patients.