The most common operative approach is an endonasal approach (with use of an endoscope), traversing the sphenoid sinus (transsphenoidal) and through the ﬂoor of the sella (see Plate 1-31). Corticotroph adenomas are basophilic and stain positively for ACTH on immuno-histochemistry. Tissue adjacent to the adenoma usually shows Crooke hyaline change, a result of atrophy of normal corticotrophs. Cure rates are 80% to 90% when a microadenoma can be localized preoperatively with either magnetic resonance imaging (MRI) or inferior petrosal sinus sampling (see Plate 3-10). A lack of cure in patients with microadenomas is attributable to either their small size, so they cannot be seen at surgery, or to an inaccessible location (e.g., cavernous sinus). MRI should be performed with a high-strength magnet (e.g., 3 tesla) and gadolinium enhancement. Only about half of ACTH-secreting pituitary tumors are large enough to be detected by MRI. In addition, approximately 10% of healthy individuals have an apparent microadenoma on MRI; thus, in a patient with Cushing syndrome, an apparent small sellar adenoma on MRI is not speciﬁc for a corticotroph adenoma. The lower cure rate (60%) for macroadenomas is usually because of cavernous sinus involvement that prevents complete resection. 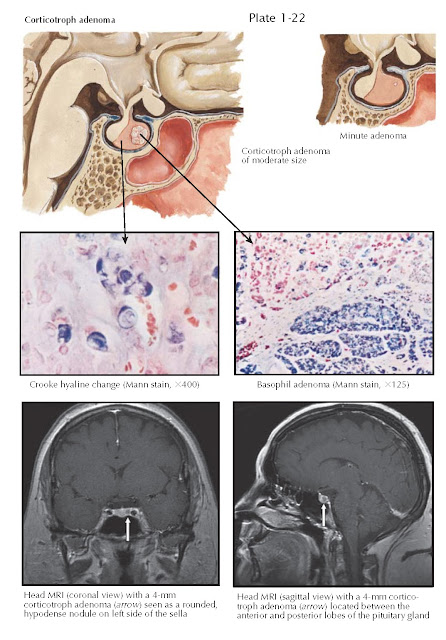 On the day of surgery, these patients should receive an intravenous dose of glucocorticoid (e.g., hydrocortisone, 100 mg). The serum cortisol concentration should be measured the morning after surgery (before additional exogenous glucocorticoid administration) to document a short-term cure, deﬁned as a low serum cortisol concentration (e.g., 1.8 g/dL). If the patient develops symptoms of acute glucocorticoid withdrawal before the serum cortisol laboratory result is available, stress dosages of glucocorticoids should be administered (e.g., hydrocortisone, 100 mg intravenously twice daily). The glucocorticoid dosage is then decreased daily, and patients are typically discharged from the hospital on dosages of exogenous orally administered glucocorticoids twofold above the standard replacement therapy dosage (e.g., prednisone, 10 mg in the morning and 5 mg at 4 pm daily). However, this dosage should be adjusted according to the severity of hypercortisolism preoperatively to prevent severe steroid withdrawal symptoms. Then the dosage of exogenous glucocorticoid is slowly tapered to a standard replacement dosage over 4 to 6 weeks after operation. The hypothalamic corticotropin-releasing hormone neurons and the atrophic anterior pituitary corticotrophs take months to recover from chronic suppression. Most patients tolerate a single dose of a short-acting glucocorticoid (e.g., 15-20 mg of hydrocortisone every morning) starting 8 to 12 weeks after surgical cure. The 8 am ld be measured

every 6 weeks; venipuncture should be performed before taking a morning dose of hydrocortisone. The serum cortisol concentration will slowly increase from undetectable levels to a concentration higher than 10 g/dL; when this occurs, the hydrocortisone dosage can be tapered and discontinued over 2 weeks. With this postoperative management protocol, the patient with typical pituitary-dependent Cushing syndrome requires exogenous administration of glucocorticoids for approximately 12 months after curative pituitary surgery. The signs and symptoms related to Cushing syndrome resolve very slowly over the ﬁrst 6 months after surgery.

However, even when the postoperative serum cortisol concentration is low, a risk for recurrent disease remains if a small number of viable adenomatous corticotroph cells are not resected at surgery, they multiply over time and eventually have the ACTH secretory mass to cause recurrent Cushing syndrome. The average time to clinically evident recurrence is 3 to 4 years. Thus, all patients should be followed up annually and assessed for recurrent disease.

Patients with Cushing syndrome are at increased thromboembolic risk perioperatively, and prophylactic measures to prevent deep venous thrombosis (including starting ambulation the day after surgery) are encouraged.

When transsphenoidal surgery fails to cure a patient with pituitary-dependent Cushing syndrome, the two main treatment options are to perform another transsphenoidal surgery or to perform bilateral laparoscopic adrenalectomy. Less frequently used options are radiation therapy to the sella or pharmacotherapy to decrease adrenal cortisol production.