The process of neurulation, including neural tube closure, is the first target of pathogenesis that specifically compromises the developing nervous system. Neural tube defects—most frequently failure of neural tube closure—can be caused by a number of factors, including single-gene mutations, aneuploid chromosomal anomalies, toxic exposures to pharmaceuticals, chemicals and drugs of abuse, maternal diabetes, and dietary deficits—most notably low levels of folic acid. Failure of cranial neural tube closure results in either anencephaly or an encephalocele (see Plate 1-5), whereas a defective caudal closure results in myelomeningocele (see Plate 1-7). Onset of anencephaly, a fatal maldevelopment characterized by lack of a majority of the fore- brain, is by the 24th day. The skull vault is absent, and the brain is a vascular mass. Ultrasound examination and an elevated alpha-fetoprotein level in maternal blood and amniotic fluid indicate the diagnosis prenatally. Risk of recurrence is 5%. 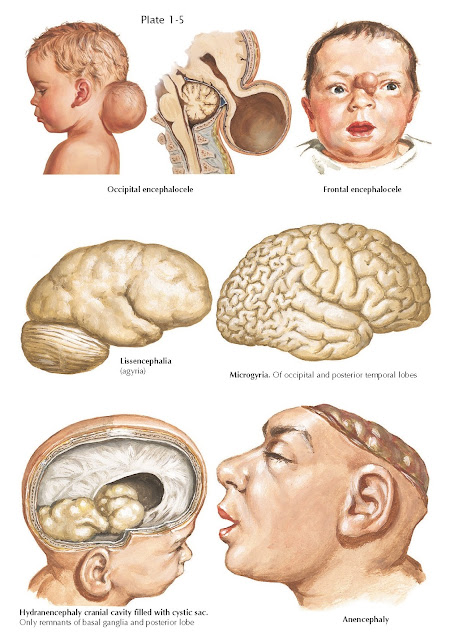 An encephalocele is a protrusion of a portion of the brain or meninges through a skull defect. Although an encephalocele usually occurs in the occipital region in patients from Europe and North America, it can develop frontally or in the nasal passages, especially in children in Southeast Asia (see Plate 1-5). The herniated brain tissue is connected through a narrow isthmus. With occipital encephaloceles, there may be associated abnormalities of the cerebellum and midbrain. The Meckel-Gruber syndrome includes a posterior encephalocele, microcephaly, microphthalmus, cleft lip and palate, polydactyly, and polycystic kidneys. This syndrome is inherited in an autosomal recessive manner, whereas for parents of a child with simple encephalocele, the risk of recurrence is 5%.

Myelomeningocele results from failure of caudal closure of the neural tube, with an 80% incidence in the lumbar region. Because closure of the central canal is essential to subsequent development of the rostral CNS, myelomeningocele also causes numerous associated brain anomalies. Prenatally, fetal ultrasonography is used to diagnose a myelomeningocele. Postnatally, magnetic resonance imaging (MRI) is particularly valuable in delineating the extent of the structural abnormalities.

All affected infants require neurosurgical intervention. The prognosis depends on the degree of CNS involvement, which may be difficult to assess in the neonate.

The most common CNS malformation is holoprosencephaly (arrhinencephalia). Holoprosencephaly results from incomplete development and septation of the midline CNS structures. It may be isolated or associated with other brain defects and occurs with varying degrees of severity. The most severe form results in a single ventricle, an absent olfactory system, hypoplastic optic nerves, or even a single “cyclopean” eye. The corpus callosum is absent, and the cortex is malformed. Potential facial anomalies include a single eye (cyclops) and a single nasal protuberance (proboscis), but in less severe cases, defects include ocular hypotelorism, microphthalmus, a flat nose, and a median cleft lip and palate. Ultrasound examination indicates the prenatal diagnosis, and MRI scans can delineate the extent of the defects. Early death is predictable in severe forms. Chromosomal abnormalities (trisomy 13-15, trisomy 18) are present in 50% of cases. In a small percentage of holoprosencephalic cases (approx. 7%), genes related to sonic hedgehog signaling are mutated. Increased awareness of chromosomal anomalies and single genes associated with holoprosencephaly makes genetic counseling important for families who have a holoprosencephalic child. 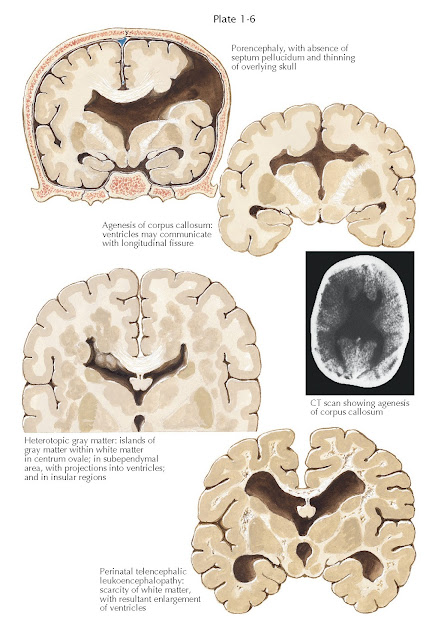 Several other clinical conditions characterized by congenital failure of fusion of the midline structures of the spinal column are grouped under the general classification of spinal dysraphism. These various manifestations of the dysraphic state span a clinical continuum from asymptomatic and unseen bony abnormalities (spina bifida occulta), to cutaneous lesions that can suggest an associated tethered cord (dimple, subcutaneous lipoma or hemangioma), to the most severe and disabling congenital malformations of the spinal structures (myelomeningocele). Early postnatal imaging with MRI has transformed the management of infants with these lesions.