This chapter introduces the clinically important principles of genetics and the application of these principles to clinical medicine. It places an emphasis on the genetics of cardiovascular diseases, the role in pharmacology, and future direction. Genetics mutation epigenetics hypertrophic cardiomyopathy long QT syndrome PCSK9 inhibitor.


In 1953, Watson and Crick published their landmark paper on the molecular structure of nucleic acids and a particularly prescient comment was made: “It has not escaped our notice that the specific pairing we have postulated immediately suggests a possible copying mechanism for the genetic material.”

The pace of technological innovation and our resulting understanding of the relationship of genetics to human disease continues to increase exponentially. Today, the ability to partially or completely sequence the genetic code of an individual is an inexpensive commodity, and the current and future impact of this knowledge continues to increase.

With this knowledge, our understanding of disease associations with the genetic code has become more complex, beyond simple assessment of various types of mutations leading to a certain phenotype. This is driven by an ever-increasing understanding of the interplay between genetic and environmental factors in disease. Today, in addition to easily understanding environmental factors important in cardiovascular disease (e.g., smoking, diet, exercise, and many others), it is apparent that the environment interacts with the genome in complex ways. Epigenetics, which is the study of changes in gene modification, or translation-altering gene expression, is now understood to be a mechanistic explanation, and possibly a therapeutic target for these environmental–genetic interactions (Fig. 3.1). One classic example of epigenetics in clinical medicine was the observation of children born to famished mothers during the Dutch Hunger Winter of 1944 to 1945. These children were observed in their sixth decade of life and were found to have higher rates of obesity and coronary artery disease (CAD). Further evaluation showed them to have decreased methylation of insulin-like growth factor-2, a factor known to be important in metabolism, energy use, and weight, compared with their genetically similar siblings. The increased understanding of factors that alter methylation, histone packaging, and noncoding RNA, to name a few, will lead to a stronger grasp of the correlation between disease and the genetic code. Because of the growing complexity and rapid pace of new information presented, the development of genetic specialists within each field has been paramount to assist healthcare providers in deciphering this information and its clinical implications. 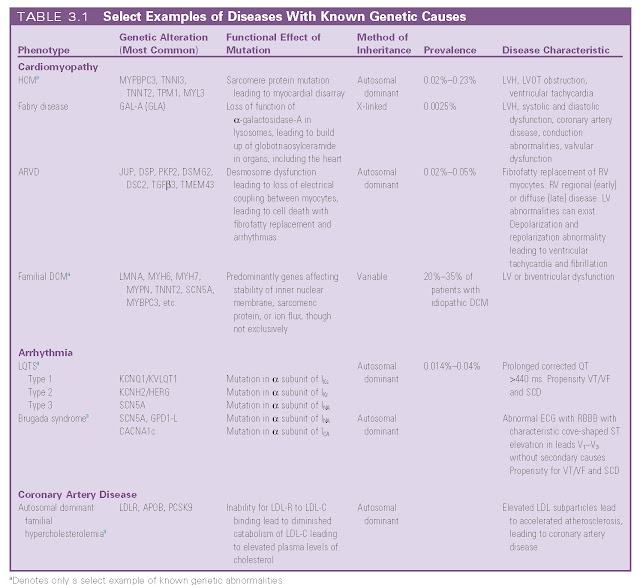 In the coming years, it is likely that genetic analysis will play an increasingly important role in understanding high-risk cardiovascular syndromes. Significant advances have been made in several cardiovascular phenotypes, as illustrated by the examples in this chapter.

Cardiomyopathy is a term that refers to a heterogeneous group of diseases that affect the myocardium. Cardiomyopathies result from multiple etiologies, including ischemia, nonischemic causes (restrictive or infiltrative), and hypertrophy, each of which has subcategories. The study of familial trends and transmissible genetic abnormalities in cardiomyopathies has led to more detailed classification based not only on phenotypic appearance, but also on genetic alterations. In some cases, this knowledge is of importance for risk stratification and treatment.

A classic example is hypertrophic cardiomyopathy (HCM), which is defined as the presence of myocardial hypertrophy caused by myocardial disarray. HCM is a disease that affects 0.02% to 0.23% of the general population, and in some, but not all HCM patients, it results in symptomatic diseases due to left ventricular outflow obstruction and an increased risk for fatal arrhythmias, such as ventricular tachycardia. Current understanding of the genetic basis of HCM is complex (Fig. 3.2). Most cases are caused by autosomal dominant mutations in genes that encode proteins in the sarcomere. Beta-myosin heavy chain and myosin-binding protein C are the most common genes affected; however, other genes in the sarcomere protein, including troponins I and T, the tropomyosin α-1 chain, and myosin light chain-3 have also been implicated in HCM.

The specific genetic basis for HCM in a given family has allowed a much better understanding of the disease and its management.

For those with an identifiable genetic cause of HCM, genetic screening of family members allows for more focused disease surveillance and management at an early stage before symptoms develop. For those in the same family who lack the causative mutation, surveillance can be less frequent, or in some cases, not necessary. The treatment of left ventricular outflow obstruction is not driven by genetic mutations per se; however, combining pedigree–phenotype analysis with DNA sequence information can identify those with an increased risk of sudden cardiac death (SCD) and may be used for decision making in the use of implantable cardioverter-defibrillator. In addition, genetic testing can identify a subset of individuals with a positive genotype but a negative phenotype, which raises new clinical questions, such as whether these individuals should be excluded from participation of competitive sports, would benefit from a prophylactic defibrillator, and how often they should be screened for phenotypic HCM.

Genetic etiologies also underlie numerous autosomal recessive and X-linked metabolic causes of cardiomyopathy, such as Anderson-Fabry disease, mitochondrial cardiomyopathies, neuromuscular diseases, and infiltrative diseases. Certain drugs, such as anabolic steroids and tacrolimus, are also therapies that have been shown to be causes of HCMs.

Arrhythmogenic diseases result from heterogeneous causes that lead to atrial and ventricular tachyarrhythmias. Some of these disease processes overlap with structural heart diseases and cardiomyopathies, such as arrhythmogenic right ventricular dysplasia and left ventricular non- compaction, which predispose patients to fatal ventricular tachycardia and fibrillation. Although molecular causes of these complex phenotypes are only now being studied, much is known about these disease processes that phenotypically only affect the conduction system and spare the myocardium.

Long QT syndrome (LQTS) describes a group of diseases whose common phenotypic feature is an abnormal QT interval on the ECG. Usually patients with a corrected QT interval exceed the 99th percentile (>450 ms for men and 470 ms for women). QT prolongation is associated with SCD, presumably because of the propensity for polymorphic ventricular tachycardia (Torsades de pointes) when a premature ventricular contraction occurs in the refractory period (prolonged in these cases. More than 200 mutations in 5 different genes (all coding for sodium or potassium channel proteins or their chaperones) have been reported to cause LQTS (Fig. 3.2; lower panel). Both autosomal-dominant and autosomal-recessive inheritance have been described for LQTS, which is the inheritance depending on the gene involved. Some forms of LQTS manifest only when a secondary cause of QT prolongation is present, such as electrolyte abnormalities, medications, or myocardial ischemia. The diagnosis of LQTS can be made by noninvasive (ECG) testing in most cases (except in the case of LQTS provoked by a secondary cause). For individuals from families with a history of SCD, careful analysis of the ECG is necessary, and provocative testing may be indicated in some circumstances. Nevertheless, the genetic basis for LQTS may be highly informative in terms of prognosis and as a guide to clinical therapy, as well as for identifying family members at risk for sudden death. More than 90% of all those with genotype-positive LQTS have genetic mutations in three main genes: KLNQ1 (its mutation causing

LQT1), KCNH2 (LQT2), and SCN5A (LQT3). Additional minor genes, such as KCNE1, KCNE2, CAV3, SCN4B, SNTA1, ANKB, and KCNJ2, only account for approximately 5% of genotype-positive LQTS. Com- mercial genetic testing of all these LQTS genes are available at affordable costs. LQTS is an excellent example of a spectrum of diseases (which were once clustered together as a single entity) that will likely benefit from the principles of pharmacogenomics, which is the use of specific medications based on genotype.

Atherosclerosis is the common pathology underlying a spectrum of arterial diseases, including coronary heart disease, ischemic stroke, aortic aneurysm, and peripheral arterial disease. Atherosclerosis continues to be a leading cause of morbidity and mortality in the Western world and a leading disorder seen by a broad range of physicians, and in its most extreme form, by cardiovascular specialists. The heritability of atherosclerotic coronary heart disease is approximately 50% to 60% with >10 monogenic causal genes and their mutations reported to cause familial atherosclerotic disease in a Mendelian pattern with variable penetrations. However, genetic and epigenetic factors that lead directly or indirectly to the accelerated process of atherosclerosis are vast and remain incompletely understood.

Recent studies of the genetics of atherosclerosis have made important advances in the identification of risk alleles for atherosclerosis, yet have also raised important questions about the usefulness of applying information about the presence of these risk alleles to clinical decision making. Using unbiased genome-wide association studies of genetic variants associated with atherosclerotic CAD, several groups simultaneously identified multiple highly correlated single nucleotide polymorphisms on chromosome 9 (9p21.3) that identified individuals at increased risk for developing coronary atherosclerosis. The immediate cross validation of this risk locus provided a high degree of certainty that it does incur increased risk of cardiovascular disease. The merits of screening individuals for these risk alleles are less certain. More than 50 single nucleotide polymorphisms have been identified to be associated with an increased risk of atherosclerotic CAD. For individuals who are known to have clinically significant atherosclerosis, knowledge of risk allele status is of little value, at least until or if specific therapies are developed for patients bearing these polymorphisms. For individuals concerned about their future risk of cardiovascular disease, it is unclear whether knowledge about risk allele status confers additional information beyond known clinical risk factors. Attempts to construct a genetic risk score to provide lifelong prediction of CAD risk, by taking a panel of genetic variants associated with increased risk of CAD, are at its early stage. Time and additional research will clarify these issues, but at present the clinical value of genetic testing for these risk alleles is not established, even if the tests are now easily available.