The presence of two out of these three main tumours establishes a working diagnosis of MEN-1. It has a prevalence of roughly 1 in 10 000 and is inherited as an autosomal dominant trait. The MEN1 gene is located on chromosome 11q13. Genetic testing for mutations should be considered in an index case with at least two out of the three main MEN-1 related tumours, and extended to asymptomatic first degree relatives if positive. Genetic testing should also be considered in patients with multiple parathyroid tumours at a young age, recurrent hyperparathyroidism, gastrinoma or multiple islet cell tumours, and in familial hyperparathyroidism (Chapter 16).

Primary hyperparathyroidism is the presenting feature in most patients, reaching 100% penetrance by the age of 50. Measurement of PTH and calcium should therefore commence on an annual basis from age 8 in a known carrier. The treatment is parathyroid surgery, although the timing and extent of surgery needs to be considered on an individual basis. Options are near-total parathyroidectomy, which will ultimately require re-operation because of growth of residual tissue, or total parathyroidectomy, needing lifelong vitamin D replacement.

Although all types of pituitary adenomas can occur in patients with MEN-1, prolactinomas (60%) and somatotroph adenomas (30%, causing acromegaly) account for the majority. Measurement of prolactin and IGF-1 should therefore be performed annually in mutation carriers. Imaging (MRI) and treatment should proceed along the same lines as for sporadic adenomas.

Islet cell NETs are usually multicentric. Gastrinomas (usually arising in the duodenal submucosa) are the most common and are managed with high dose proton pump inhibitors with or without surgery. Other tumour types, including non-functioning NETs, can require surgery depending on size and symptoms. Screening with annual fasting gut hormone profile and MRI every 1–3 years should commence from age 20. 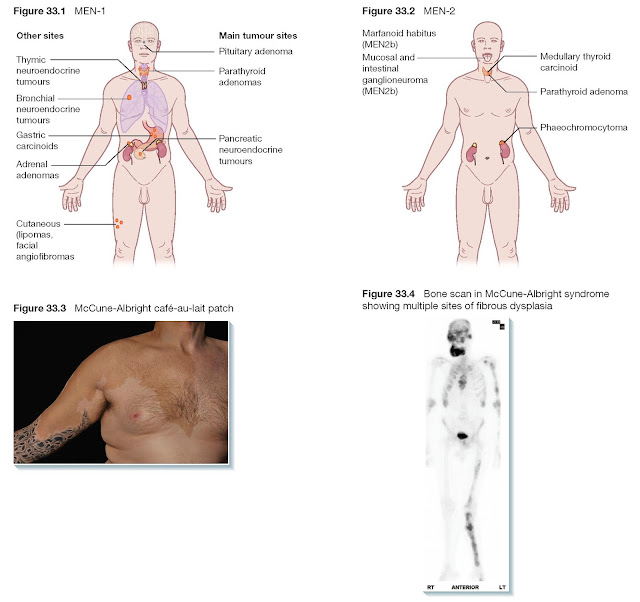 MEN-2, which occurs because of mutations in the RET gene and is inherited in an autosomal dominant manner, is characterised by (Figure 33.2):

It is subdivided along phenotypic lines into MEN-2a (75% cases) and several rare variants, including familial MTC and MEN-2b (characterised by a Marfanoid body habitus, intestinal and mucosal ganglioneuromas). In contrast to MEN-1, there is a strong relationship between genotype and phenotype in MEN-2. This has important practical implications in relation to the timing of thyroidectomy, which should be undertaken in the first year, first 5 years, or later depending on the ‘risk’ group of the RET mutation. Phaeochromocytoma is screened for annually with measurement of metanephrines and managed as per sporadic disease. Hyperparathyroidism usually runs a mild course but can be managed with subtotal parathyroidectomy.

This is a rare autosomal dominant condition characterised by spotty skin pigmentation, cardiac myxomas, peripheral nerve lesions and one or more endocrine disorders, of which Cushing’s syndrome caused by primary pigmented adrenal disease is the most common. GH-secreting tumours, testicular, ovarian and thyroid tumours (benign or malignant) are other recognised manifestations.

This syndrome, which arises from a somatic mutation in the GNAS1 gene, is characterised by the triad of café au lait patches (Figure 33.3), polyostotic fibrous dysplasia (Figure 33.4) and multiple endocrinopathies: precocious puberty, gigantism hyperprolactinaemia, thyroid nodules and yperthyroidism, and Cushing’s syndrome.