Few anatomic features of the mature brain reflect brain development more directly than the brain ventricles. This continuous system of fluid-filled chambers is the very same space that was defined by the closure of the neural tube. Subsequent morphogenesis modifies this space; nevertheless, its relationship to the original lumen of the neural tube is clear. CSF, which is pro- duced by the choroid plexus found in the lateral, third, and fourth ventricles, circulates throughout this space in the adult (as well as the embryonic) brain. The ventricular space also has a series of continuities with the subarachnoid space so that CSF is also bathing the external as well as deep (or ventricular) surface of the brain. 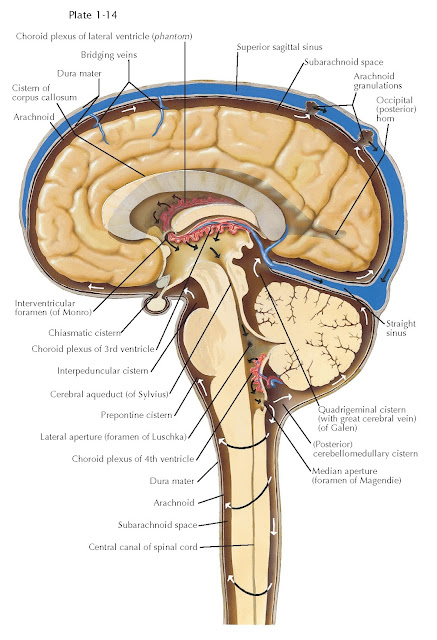 The third ventricle is continuous with the cerebral aqueduct, which travels through the mature mesencephalon. The cerebral aqueduct connects to the fourth ventricle, which is adjacent to the cerebellum and pons, and extends into the upper medulla. The fourth ventricle has a significant bilateral extension, the lateral recess that opens into the inferior cerebellar peduncle. The fourth ventricle also has several specialized continuities with the subarachnoid space to facilitate the circulation and drainage of cerebrospinal fluid, which maintains the integrity of cells at the ventricular zone and also contributes to the stability of the ionic milieu in the brain tissue generally. Thus the two lateral apertures (also known as the foramen of Luschka) are continuous with the subarachnoid space at the lateral aspect of the pontocerebellar junction (near the inferior cerebellar peduncle) and the median aperture, located at the midline where the two lateral recesses originate, is continuous with the cerebellomedullary cistern (also referred to as the cisterna magna). Indeed, there is a distributed system of cisterns throughout the subarachnoid space that provide reservoirs of CSF.