Prostatic infarction, recent or healed, is found in up to 25% of cases of benign hypertrophy when the excised glandular tissue is carefully studied. They generally produce few, if any, clinical symptoms but if large enough can mimic acute prostatitis or cause hematuria and urinary retention. The infarcted areas may be single, multiple, and up to several centimeters in size and are usually located around the periphery of an area of prostatic hyperplasia within the transition zone. They occur more often with signiﬁcant hyperplasia and in instrumented patients, although they can occur without obvious cause or infection. Prostatic infarcts are thought to be due to arterial obstruction from enlarging hyperplastic nodules, infection, or inﬂammation on the urethral branches of the prostatic artery (see Plate 2-6). 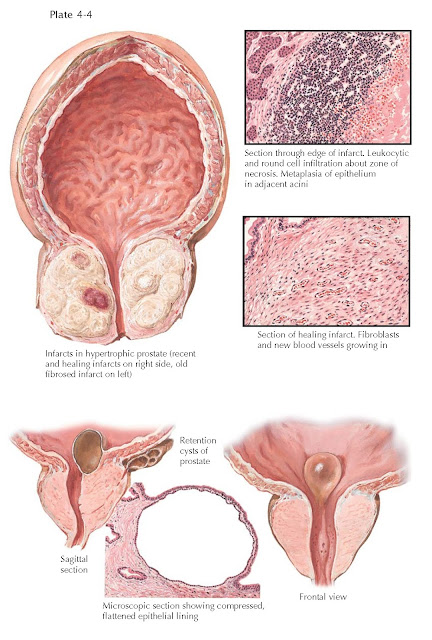 Grossly, prostatic infarcts show mottled yellowish areas surrounded by a hemorrhagic margin. Within the area of infarction, the tissue loses its normal structure and becomes necrotic. Acutely, swelling and edema compress the surrounding acini. Interestingly, with infarction the epithelium of the immediately surrounding acini may be altered, in which normal cells are replaced by polygonal and sometimes squamous cells. This multiplication of cell layers often ﬁlls and obliterates the lumen of the adjacent acinus. Histologically, these cells lack characteristics of metaplasia, including keratinization and intercellular bridges, and therefore more closely resemble regenerative dysplastic cells than squamous epithelium. These marginal changes are not malignant or precancerous and should not be considered squamous cell carcinoma.

Prostatic cysts occur in 10% of adult men and generally have little clinical signiﬁcance. They can be congenital due to müllerian or wolfﬁan ducts remnants. Other cysts may be of parasitic origin from schistosomiasis or Echinococcus infection. Hemorrhagic cysts can occur within degenerating areas of advanced prostatic carcinoma. The common prostatic cyst is a simple retention cyst that arises from prostatic acini, generally beneath the trigone. They are likely a consequence of obstructed acini and can be multilobular from rupture of the thin walls between adjacent obstructed acini. Such cysts may project into the urethra or into the bladder neck. When located near the gland periphery, they may be palpable on rectal exam as soft, ﬂuctuant masses. Prostatic retention cysts of 6 to 8 mm diameter are not uncommon but larger cysts up to several centimeters in size are relatively rare and can be symptomatic.

Prostatic cysts are lined by thin, ﬂattened, columnar epithelia. When they project into the bladder or urethra, they are covered with the mucous epithelium of the surrounding structure. Cyst contents on aspiration appear thin and milky. Symptomatic cysts that project into the prostatic urethra or the blader neck are easily removed by transurethral resection.