The vast majority of ureteral injuries are iatrogenic, occurring during either open pelvic surgery or ureteroscopy. Injuries associated with open surgeries often affect the distal one third of the ureter and go undiagnosed until the postoperative period. The procedures most often implicated are transabdominal hysterectomy and abdominoperineal resection. Fortunately, such complications are rare, with the ureter injured in only 0.5% to 1.0% of all pelvic operations. Injuries incurred during ureteroscopy typically occur during the basketing and attempted removal of ureteral stones.

Ureteral injuries from external trauma are very rare, and more than 95% are related to penetrating wounds. Gunshot wounds account for the vast majority of such injuries; these can either directly rupture the ureter or cause severe contusions secondary to energy from the blast. Blunt injuries account for the remaining 5% of cases and can affect the ureter through several mechanisms. First, a deceleration injury may dislocate the kidney and cause tears at the ﬁxation point of the ureteropelvic junction. In addition, hyperextension injuries of the back may cause avulsion of the ureter as it is stretched against the lower thoracic and lumbar vertebral bodies. This type of injury classically occurs in children struck by motor vehicles.

Successful surgical management of ureteral injuries requires a high index of suspicion, early diagnosis, and an intimate knowledge of ureteral anatomy and blood supply. If recognized and repaired promptly, a ureteral injury is usually associated with low morbidity. Delayed recognition of ureteral injuries, however, is common and results in signiﬁcant morbidity, which can include a urinoma, stricture (with subsequent hydronephrosis), ﬁstula, abscess, or sepsis. 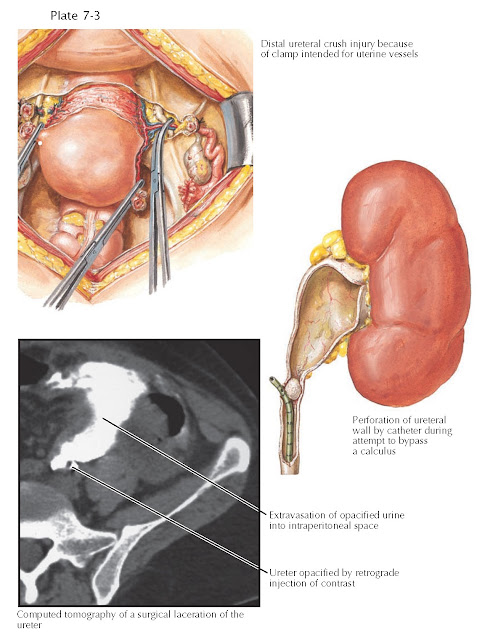 Patients may complain of ﬂank pain or hematuria, although the latter is not a reliable sign and is absent in up to 45% of penetrating and 67% of blunt ureteral injuries. Findings on physical examination may include costovertebral angle tenderness, ﬂank ecchymosis, and an abdominal mass. In most cases, however, symptoms are nonspeciﬁc. Therefore, clinicians should focus on the patient history and maintain a low threshold for imaging.

If intraoperative or blunt injury is suspected, CT with intravenous contrast and ﬁne cuts through the ureter should be performed to determine the presence and location of contrast extravasation. Scans must be delayed long enough to visualize excretion of contrast in the ureter, which usually takes at least 10 minutes.

Although retrograde pyelography (RPG) is also sensitive enough to reveal most injuries, it is both time-consuming and cumbersome. Thus RPG has little role in the acute trauma setting and is reserved for the stable patient with an equivocal CT scan. If RPG is per- formed, however, it may be possible to treat the ureteral injury at the same time by deploying a stent.

If there is a penetrating injury to the peritoneum, surgical exploration is required. The ureters should be examined for damage using intravenous or retrograde injection of indigo carmine, which will extravasate at injury sites.

In patients who are too unstable to undergo ureteral reconstruction, a “damage control” approach is appropriate. Two common strategies include bringing the ureter to the abdominal wall (temporary cutaneous ureterostomy) or ureteral ligation followed by percutaneous nephrostomy. Deﬁnitive reconstruction is delayed until the patient stabilizes.

In stable patients, injuries should be explored and repaired.

Ureteral contusions can lead to strictures if untreated and should thus be stented and drained. If the contusion is severe, the ureter should be segmentally resected; debrided until a bleeding edge is reached; reanastomosed tension-free over a stent; and drained.

Ruptures of the upper and midureter can be repaired with primary ureteroureterostomy, an end-to-end anastomosis over a stent. Ruptures of the distal ureter are repaired by reimplanting the ureter into the bladder (ureteroneocystostomy). If there is extensive loss of the distal ureter, a section of the bladder is sewn to the ipsilateral psoas minor tendon (psoas hitch) to help bridge the gap. The ureter is then reimplanted into the bladder. If the bladder is too small or noncompliant for stretching, a transureteroureterostomy can be performed, in which the injured ureter is brought across the midline and sewn to the side of the contralateral ureter. This procedure is also useful when there are associated rectal, pelvic, or vascular injuries.

Complex reconstructions of extensive ureteral injuries may be performed on an elective basis but are not appropriate for acute management (see Plate 10-36). Such procedures include ileal interposition, in which the small bowel is used as a ureteral replacement; Boari ﬂap, in which a section of the bladder is reconstructed as a tube; and autotransplantation, in which the kidney is relocated to the ipsilateral pelvis.