In the nephron, water reabsorption is a passive phenomenon that relies on the transcellular osmotic gradients established during the reabsorption of solutes, especially sodium. Osmotic diuretics alter these gradients to produce diuresis. After intravenous administration, such agents undergo ﬁltration at the glomerulus but then cannot be reabsorbed. As sodium and water are reabsorbed, osmotic diuretics become more concentrated in the tubular lumen, eventually generating an osmotic gradient that interferes with further ﬂuid reabsorption. In the proximal tubule, the decreased ﬂuid reabsorption also establishes a transepithelial sodium concentration gradient, normally prevented by the iso-osmotic reabsorption of water, that limits further sodium reabsorption. 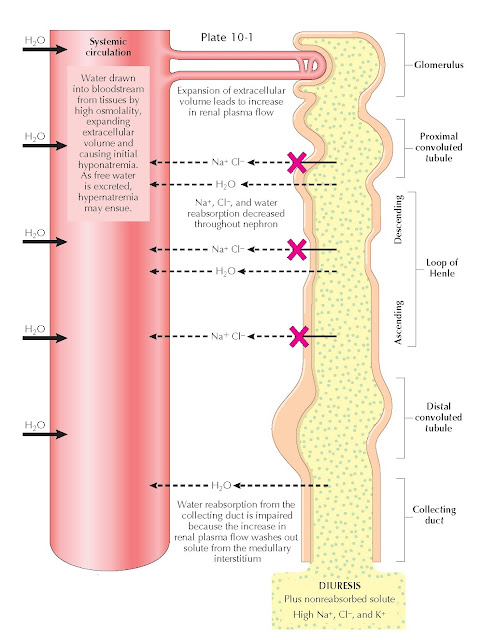 The major osmotic diuretic is mannitol, which has a half-life of 0.25 to 1.7 hours and primarily undergoes renal excretion.

The most common indications for mannitol include:

·   Acute kidney injury, although several randomized con- trolled studies have found that mannitol offers no beneﬁt in this setting.

·  Cerebral edema. Mannitol is restricted from the brain by the blood-brain barrier. Therefore, its presence in the general circulation produces an osmotic gradient that promotes a shift of free water from the cerebrospinal ﬂuid to the blood.

·     Acute closed-angle glaucoma. For the reasons described, mannitol can promote ﬂuid shifts from the eye into the general circulation.

The major adverse effects of mannitol include:

·  Hyponatremia/hypernatremia. Osmotic agents are associated with an initial phase of hyponatremia, which results from the systemic efﬂux of intracellular ﬂuid in response to extracellular hyperosmolality (“pseudohyponatremia”). As free water is excreted with mannitol in the urine, hypernatremia follows, which can cause mental status changes, headache, lethargy, and nausea.

·      Pulmonary edema owing to the expansion of extracellular volume