The femoral triangle is a subfascial space in the upper third of the thigh. It is bound by the inguinal ligament above and by the sartorius muscle laterally and the adductor longus muscle medially. The apex of the tri-angle lies downward; it is formed by the crossing of the sartorius muscle over the adductor longus. The floor of the triangle is also muscular. The borders of the ilio- psoas and pectineus muscles bound a deep groove in the floor, and, here, the medial circumflex femoral artery passes to the back of the thigh. The femoral artery enters the adductor canal at the apex of the triangle. The femoral vein lies on the pectineus muscle, medial to the femoral artery; here, it receives the greater saphenous vein. The femoral nerve descends under the inguinal ligament in the groove between the iliacus and psoas major muscles. In the triangle, it divides into most of its muscular and cutaneous branches; only the saphenous nerve and one of the nerves to the vastus medialis muscle continue into the adductor canal. 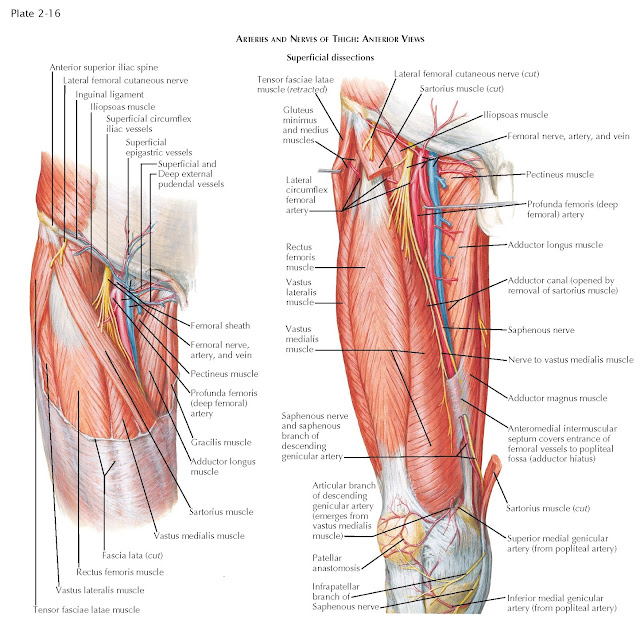 The femoral artery and vein are covered by the femoral sheath for about 3 cm beyond the inguinal ligament. Here, the extraperitoneal connective tissue of the abdomen extends between the vessels and forms three compartments a lateral one for the artery, a middle one for the vein, and a medial one for one or more deep inguinal lymph nodes and fat. The medial compartment is known as the femoral canal, and its abdominal opening is the femoral ring.

The medial circumflex femoral artery springs from the medial and posterior aspect of the deep femoral artery. Its course is deep into the femoral triangle, between the pectineus and iliopsoas muscles and under the neck of the femur to the back of the thigh. Deep to the adductor brevis muscle, an acetabular branch enters the hip joint beneath the transverse ligament of the acetabulum. Several muscular branches supply the adductor brevis and adductor magnus muscles, one distributing with the obturator nerve. Anterior to the quadratus femoris muscle, the artery divides into an ascending branch to the trochanteric fossa of the femur and a descending branch to the hamstring muscles beyond the ischial tuberosity. 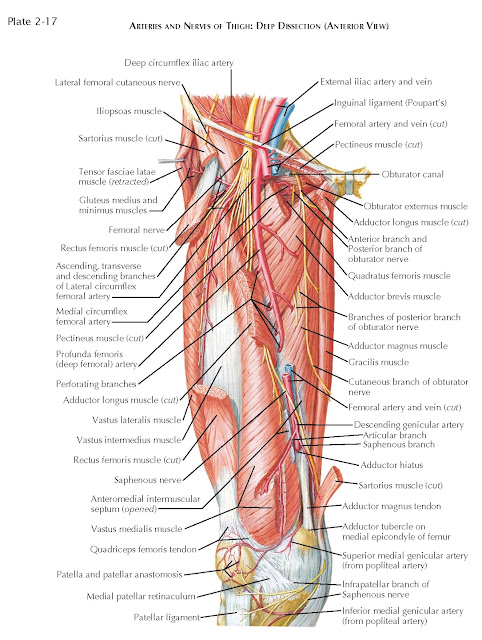 The lateral circumflex femoral artery arises from the lateral side of the deep femoral artery, passes lateralward deep to the sartorius and the rectus femoris muscles, and divides into anterior, transverse, and descending branches. The ascending branch passes upward beneath the tensor fasciae latae muscle and anastomoses with terminals of the superior gluteal artery. The small transverse branch enters the vastus lateralis muscle, winds around the femur below its greater trochanter, and anastomoses on the back of the thigh with the medial circumflex femoral, inferior gluteal, and first perforating arteries (cruciate anastomosis). An articular artery for the hip joint may arise from either branch. The descending branch passes on the vastus lateralis muscle, accompanied by a branch of the femoral nerve to this muscle, and anastomoses with the descending genicular branch of the femoral artery and the lateral superior genicular branch of the popliteal artery.

The perforating arteries are usually three in number and arise from the posterior surface of the deep femoral artery. They pass directly against the linea aspera of the femur and pierce the tendons of the adductor muscles to reach the muscles of the posterior compartment of the thigh. The first perforating artery passes immediately below the pectineus and through the middle of the tendon of the adductor brevis muscle; the second, after giving off a nutrient artery to the femur, through its lower 3 or 4 cm; and the third, just below the lowest part of the adductor brevis. The deep femoral artery ends as the fourth perforating artery, which pierces the adductor magnus muscle and largely ends in the short head of the biceps femoris muscle. These vessels anastomose with all the vessels of the back of the thigh.

The descending genicular artery arises from the femoral artery just before the latter passes through the adductor hiatus and immediately divides into saphenous and articular branches. The saphenous branch pierces the vastoadductor membrane and descends between the tendons of the gracilis and sartorius muscles in company with the saphenous nerve, supplying the skin and superficial tissues in the upper medial part of the leg. The articular branch descends in the substance of the vastus medialis muscle to the medial side of the knee. It supplies the vastus medialis muscle, and a branch passes lateralward over the patellar surface to anastomose with all other arteries at the knee joint.

The obturator artery is a branch of the internal iliac artery. It leaves the pelvis via the obturator canal and immediately divides into anterior and posterior branches. These supply the obturator externus and obturator internus muscles and give branches to the adductor brevis and adductor magnus muscles. The posterior branch gives off an acetabular artery, which enters the hip joint through the acetabular notch and provides the small artery of the capitis femoris ligament.

The superior and inferior gluteal arteries are branches of the internal iliac artery. Although arising within the pelvis, they exit immediately into the gluteal region of the thigh. The superior gluteal artery emerges above the piriformis muscle and there divides into a superficial branch to the gluteus maximus muscle and a deep branch to the intermuscular plane between the gluteus medius and gluteus minimus muscles. An upper radicle of this branch supplies the gluteus medius, gluteus minimus, and tensor fasciae latae muscles and reaches as far as the anterior superior iliac spine. A lower radicle is directed toward the greater trochanter of the femur and supplies the gluteal muscles and the hip joint.

The inferior gluteal artery leaves the pelvis below the piriformis muscle and provides large muscular branches to the gluteus maximus muscle and muscles arising from the ischial tuberosity. Small branches pass medially as far as the skin over the coccyx. An anastomotic branch descends across the short lateral rotator muscles of the hip and contributes to the cruciate anastomosis of the back of the thigh. Cutaneous branches accompany radicles of the posterior femoral cutaneous nerve, and an accompanying artery of the sciatic nerve descends on the surface of that nerve. The inferior gluteal artery is long and slender and may reach as far as the lower part of the thigh. It is developmentally the major artery of the lower limb. 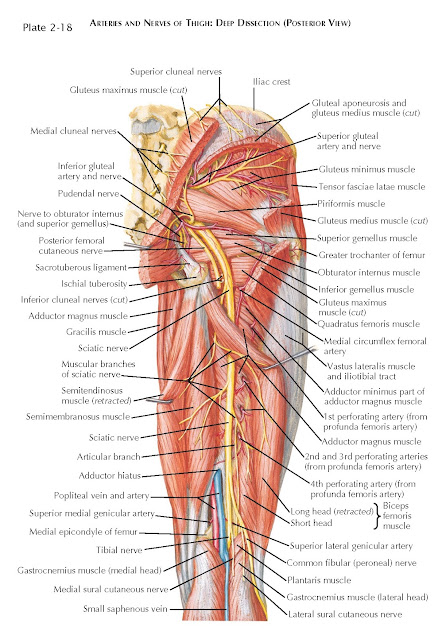