Flail chest refers to instability of the chest wall caused by multiple segmented rib fractures or cartilage disruptions such that a portion of the bony chest wall loses its continuity from the remaining thoracic cage because of contiguous rib disruptions. A ﬂail chest occurs in the setting of severe trauma, usually after a motor vehicle crash or fall from more than 20 feet. If the crushing blow is directly over the sternum, as with an impact by the steering column, the ﬂail segment is produced by bilateral costochondral separations, and there may be an associated sternal fracture. Because of protective air bag systems in automobiles, however, lateral mid-chest ﬂail segments are more common. In either location, it is evident on physical examination that the ﬂoating portion of the chest wall moves in and out with respiration in an opposite or paradoxical manner with respect to the remaining intact chest wall. This abnormality in ventilatory mechanics renders the respiratory effort inefﬁcient and, when compounded by reduced tidal volume because of pain, may produce extensive lung collapse with hypoxia, hypercapnia, ineffective cough, and retention of secretions. Although the mechanical effects of a ﬂail segment may appear impressive, the associated hypoxia is often exacerbated by underlying pulmonary contusion. Consequently, the management beyond pain control of ﬂail chest is largely governed by the magnitude of concomitant pulmonary contusion. Although surgical stabilization of the chest wall for acute ﬂail chest has been suggested in the past, randomized trials have not established an outcome beneﬁt. Occasionally, a patient with persistent chest wall instability caused by nonunion will be a candidate for internal rib ﬁxation with a plate. These patients include those with severe pain and respiratory compromise, typically caused by multiple, severely displaced rib fractures with overriding fragments. 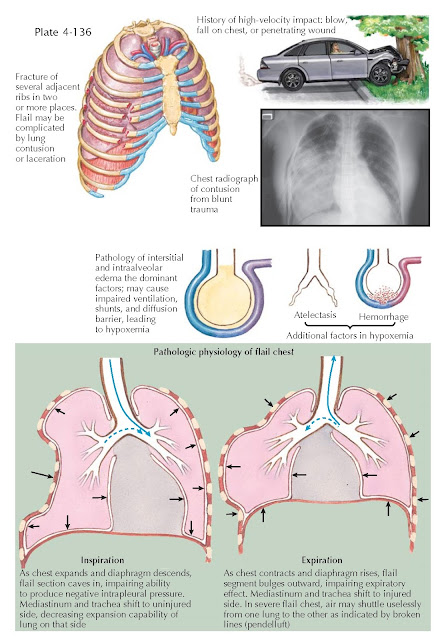 The most common source of pulmonary dysfunction after chest trauma is direct injury to the lung (i.e., pulmonary contusion). Pulmonary contusions produce ventilation/perfusion (V/Q) mismatching, resulting in arterial hypoxemia. Because the force required to produce a lung contusion is severe, this lesion occurs predominantly from high-speed motor vehicle crashes, falls from great heights, or high-velocity missiles. The pathophysiology is complex, with the initial defect largely a reﬂection of direct mechanical disruption and alveolar collapse with hemorrhage. But a delayed component caused by the inﬂammatory response to injury is often more signiﬁcant, with the secondary interstitial and interalveolar edema producing shunting and severe hypoxemia.

The multiphase pathophysiology of pulmonary contusion is mirrored in the clinical ﬁndings. Often the contusion is relatively subtle on the initial chest radiograph and the pulmonary symptoms are mild, but typically, the lesion extends and symptoms and signs progress over the ensuing 12 to 48 hours. Typical symptoms include dyspnea and chest pain, and common signs are tachypnea, tachycardia, pulmonary crackles, and variable signs of chest contusion or rib fracture.

Hypoxemia, documented by arterial blood gas analysis, is often out of proportion to the extent of opacities on the chest radiographs. Consequently, prompt recognition of pulmonary contusion is critical to avoid sudden unexpected pulmonary failure. Serial physical examination, chest radiographs, and monitoring of oxygen saturation are important in high-risk patients, and endotracheal intubation should be considered early in patients manifesting progressive deterioration. The management of pulmonary contusion is largely supportive, using positive end-expiratory pressure to maintain oxygenation and avoiding excessive airway pressure with lower tidal volumes. Unless complicated by ventilator-associated pneumonia, the physiologic effects of pulmonary contusion usually resolve in 5 to 7 days. On the other hand, in multisystem-injured patients, pulmonary contusion is a risk factor for the development of adult respiratory deﬁciency syndrome.