The risk of RDS is inversely proportional to the gestational age. It is more common in white than black infants and nearly twice as common in boys as girls. There is also the likelihood of familial recurrence in a subsequent prematurely born infant. Surfactant protein B deﬁciency results in lethal respiratory failure; it has an autosomal recessive inheritance. Delivery by cesarean section in the absence of previous labor also poses a risk, particularly if the birth occurs before 37 weeks of gestation. Precipitous delivery after maternal hemorrhage, asphyxia, or maternal diabetes is associated with a greater likelihood of RDS, and a second-born twin is at greater risk than the ﬁrstborn. Maternal conditions that are thought to have a sparing effect on the development of the disease are conditions associated with chronic intrauterine distress that lead to growth-retarded infants. There is no consensus on the impact of pro- longed rupture of the membranes; an apparent sparing effect may be explained by greater use of antenatal corticosteroids. Antenatal administration of dexamethasone or betamethasone to women in preterm labor signiﬁcantly reduces the risk of RDS and neonatal death.

On gross examination, the lungs are found to be liver- like, and they generally sink in water or formalin. Under the microscope, much of the lung appears solid because of the tight apposition of most of the alveolar walls. Scattered throughout are dilated airspaces, respiratory bronchioles, alveolar ducts, and a few alveoli, some of whose walls are lined with pink-staining “hyaline” material containing ﬁbrin and cellular debris. The capillaries are strikingly congested, and pulmonary edema and lymphatic distension may be present.

Epithelial necrosis in the terminal bronchioles at sites underlying the hyaline membranes suggests that a reaction to injury has taken place. Hypersecretion of tracheobronchial mucus is evident, and reparative proliferation of type II cells is seen in infants who die on the second or third day of life.

RDS is caused by immaturity of the lung with respect to surfactant synthesis or suppression of synthesis adequate to meet postnatal demands as, for example, by asphyxia. Surfactant deﬁciency results in failure of stabilization of small airways at end-expiration with consequent reduction of functional residual capacity. Each new inspiration requires the application of sufﬁcient transpulmonary pressure to reinﬂate atelectatic air-spaces. A high respiratory frequency and large applied pressures have to be used to maintain effective ventilation. Uneven distribution of inspired air and perfusion of nonventilated alveoli result in poor gas exchange characterized chieﬂy by hypoxemia. The infant grunts in an attempt to prolong end-inspiration, a pattern of breathing that can be shown experimentally to improve alveolar ventilation.

Pulmonary vascular resistance is increased by vasoconstriction caused by hypoxia, with a resulting increase in right-to-left shunts through the persistent fetal vascular pathways, ductus arteriosus, and foramen ovale. The hypoxemia is further aggravated because as much as 80% of the cardiac output may be shunted past airless lungs.

Wasted ventilation and ineffective perfusion initiate a train of events that accounts for most of the ﬁndings in RDS. Reduced oxygenation of the myocardium impairs cardiac output and perfusion of the kidneys, whose ability to maintain acid-base homeostasis is com- promised. Poor perfusion of peripheral tissues contributes to lactic acidemia and a profound metabolic acidosis.

The onset of symptoms is within minutes of birth and always within hours of birth. Tachypnea, grunting, and indrawing of the sternum, intercostal spaces, and lower ribs during inspiration are characteristic. Increasing cyanosis is a notable feature of the disease. In the absence of treatment with exogenous surfactant, the dyspnea worsens over the next 36 to 48 hours, and the infant becomes edematous. Surfactant synthesis then commences, and this is associated with spontaneous diuresis.

The earliest radiographic ﬁnding is a ﬁne miliary mottling of the lungs. The air-ﬁlled tracheobronchial tree stands out in relief against the opaciﬁed lung roots, which often obscure the cardiothymic silhouette. The appearance may change depending on the lung volume at which the radiograph is taken. A good cry can aerate both lungs, and a deep inspiratory effort may produce a radiographic picture suggesting minimal disease. The miliary reticulogranularity of the lung parenchyma is usually present within minutes of birth.

During the course of the disease, chest radiographs may show a number of changes, including pulmonary interstitial emphysema, pneumomediastinum, and pneumothorax. In some infants, recovery is slow, with infants remaining ventilator and oxygen dependent for weeks and even months. 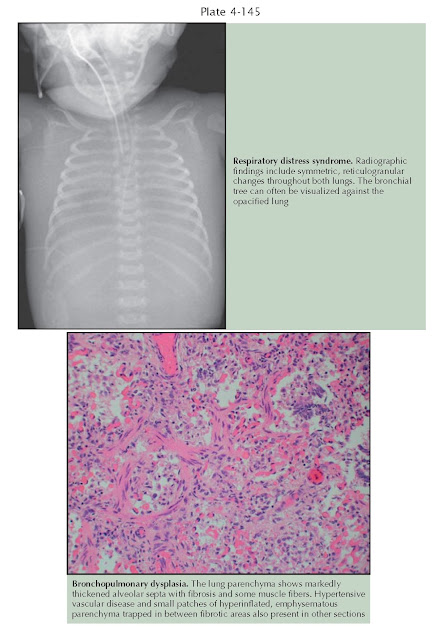 Of primary importance is the need to correct any blood gas abnormalities. Some babies may only require supplementary oxygen to keep arterial oxygen tensions at 50 to 70 mm Hg. Others, however, have an associated respiratory acidosis and need more respiratory support. Some centers prefer to use continuous positive airway pressure delivered by nasal cannulae, but others intubate and ventilate. Numerous forms of mechanical ventilation are available, including positive-pressure ventilation, patient-triggered ventilation, high-frequency jet ventilation, and high-frequency oscillation. Randomized trials have been undertaken, but to date, the form of respiratory support with the least chronic respiratory morbidity has not been identiﬁed.

Infants may develop pulmonary interstitial emphysema and pneumothorax during the course of ventilatory therapy, although these complications are less common in infants who have received surfactant therapy. Infants who survive the ﬁrst week or so of illness may become respirator and oxygen dependent. Typically, their lungs undergo a series of changes that are characterized by air trapping, atelectasis, ﬁbrosis, cyst formation, and basilar emphysema. This condition was described by

Northway and Rosan in 1967 and called bronchopulmonary dysplasia (BPD). Nowadays, infants who remain oxygen dependent for more than 28 days after birth are described as having BPD. The course is chronic, sometimes lasting months or years. Complete recovery is possible, but death from intercurrent illness is a continuing threat. At autopsy, the lungs are found to be heavy, hypercellular, and ﬁbrotic, with squamous metaplasia of even the small airways. Because the cilia are gone, it is not surprising that secretions pool; either atelectasis or lobular emphysema is common. BPD has a multifactorial cause and may occur in very prematurely born infants exposed to high inspired oxygen concentrations and high airway pressures.

Increasingly, however, it is now appreciated that BPD can occur in infants who initially had minimal or even no respiratory distress. Antenatal infection and inﬂammation contribute to the development of BPD, and there appears to be a genetic predisposition. Affected infants may experience chronic respiratory morbidity with lung function abnormalities and exercise intolerance even as adolescents.

When antenatal corticosteroids and prophylactic surfactant are used, the overall mortality rate rom RDS has been reduced to between 5% and 10%.