Lyme disease is a tickborne infection caused by the spirochete bacteria, Borrelia burgdorferi. The deer tick, Ixodes scapularis, is the main tick responsible for transmitting the disease to humans. Discovered in 1975 in the Connecticut town of Lyme, this disease has become the most common tickborne disease in the United States. Most cases are reported in the spring, summer, and early fall, correlating with tick activity. The disease not only affects humans but has been reported to affect dogs, horses, and cattle.

Clinical Findings: Erythema migrans is the characteristic cutaneous rash of Lyme disease. Erythema migrans typically manifests as a solitary “bull’s-eye” macule at the site of the tick bite. There is a central red macule surrounded by nonaffected skin, which is then entirely surrounded by an expanding erythema that blends in with the normal skin. The rash of erythema migrans is larger than 2 cm in diameter. The rash manifests soon after the tick has transmitted the bacteria into the skin. Occasionally, the central portion of the lesion forms a vesicle or bulla. Solitary skin lesions are the most frequent skin manifestation, but one can also encounter early disseminated Lyme disease. This results in multiple areas of skin involvement. The numerous skin lesions are smaller than the original lesion, lighter in color, and not as fully developed as bull’s-eye lesions. This early dissemination of B. burgdorferi occurs in one quarter of infected individuals. Most patients also exhibit constitutional symptoms at the time of diagnosis, including headache, fever, and malaise. 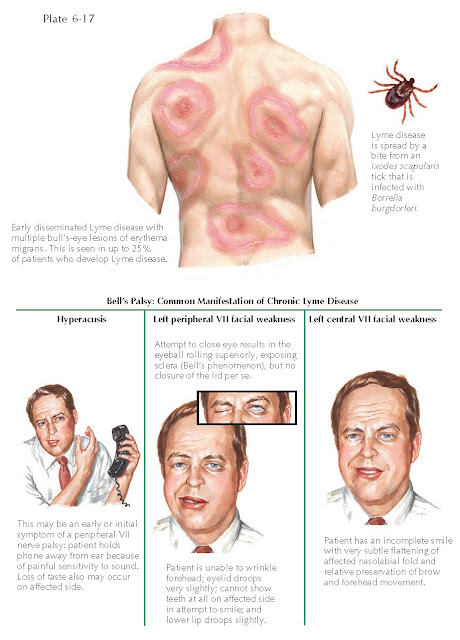 Erythema migrans occurs in approximately 75% of those infected with the spirochete. Individuals who do not exhibit the rash and those who go without treatment are likely to develop chronic disease, which manifests in many ways. Lyme arthritis is one of the most frequent manifestations of chronic Lyme disease; it is typically oligoarticular in presentation. Another of the more frequently seen manifestations is Bell’s palsy, which is caused by involvement of the central nervous system. The cardiovascular, nervous, musculoskeletal, and hematological systems may all be involved in chronic Lyme disease.

Histology: Skin biopsies of erythema migrans show a lymphocytic superficial and deep dermal infiltrate. Numerous plasma cells may be seen in conjunction with eosinophils. Spirochetes are seen in fewer than half of specimens. The pathological findings of erythema migrans are used to help confirm the clinical findings. However, one should not wait for the pathology report to treat a patient with clinical evidence of Lyme disease. Pathogenesis: B. burgdorferi is a spirochete that is transmitted to humans via the bite of the deer tick (I. scapularis). The white-tailed deer and the white-footed mouse are the two reservoirs for B. burgdorferi. These two animals are typically unaffected by the bacteria. The larval, nymph, or adult form of the I. scapularis tick takes a blood meal from one of these reservoirs and acquires the bacteria. The spirochete causes the tick no harm and can survive in the gut of the tick for prolonged periods. The tick can then transmit the bacteria to an incidental host such as a human. Transmission of the bacteria is increased the longer the tick is attached to the host. It is generally believed that a tick must be attached for 24 hours to transmit the bacteria.

Treatment: Treatment of erythema migrans consists of a 3-week course of doxycycline. The therapy is highly effective and has an excellent safety profile. Amoxicillin can be used for patients who cannot take doxycycline and for young children. Central nervous system involvement requires intravenous therapy with ceftriaxone or penicillin. Prevention is critically important. Permethrin-based insect repellants are effective at repelling deer ticks. Clothing impregnated with permethrin can be purchased for those who spend time outdoors in endemic areas.

After being in a wooded region, people should check their skin for the presence of ticks and remove them immediately, because the transmission of the spirochete requires approximately 24 hours of attachment. This inspection method works for adult ticks, but the larvae and nymphs are too small to see routinely and are almost always overlooked.