Physical examination of the hip is initiated with observation of the patient. Specific note is made of body habitus. Gait is evaluated directly, looking for a Trendelenburg or antalgic gait that favors the affected side. Both gait patterns are associated with intra-articular and extra-articular hip pathologic processes.

The patient is then placed supine on an examination table, and landmarks are palpated. These landmarks include the anterior superior iliac spine, iliac crest, pubic symphysis, pubic tubercles, and proximal adductor tendons. The abdomen may also be palpated in this position if there is concern about any abdominal disorder.

Range of motion of the hips is then evaluated. This may be also examined combined with the upright and prone position based on the preference of the examiner. First checked is hip flexion, followed by internal and external rotation with the hip flexed to 90 degrees. In full extension, the hip is taken into adduction as well as abduction. Straight-leg hip flexion can also be evaluated for hamstring tightness or radicular low back pain. Deficits or painful ranges are noted compared with the contralateral/unaffected side. Specific tests for the hip joint in this position include the anterior impingement test (flexion/adduction/internal rotation), which is commonly painful in the face of labral tears or osteoarthritis. The hip may also to be placed in the figure-4 position, looking for pain or a loss of motion that may also indicate intra-articular findings. Straight-leg raising is performed to evaluate hip flexion strength in the supine position. Resisted adduction is also tested in the supine position to evaluate strength and integrity of the adductors. 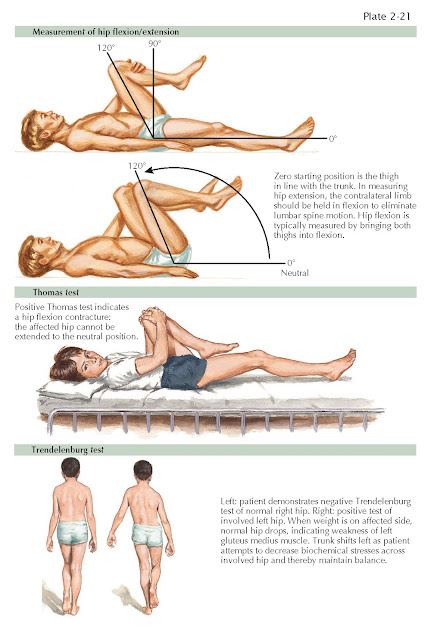 The patient is then placed in the lateral decubitus position, and both the affected and nonpainful side are evaluated. Palpation is begun over the greater trochanter (trochanteric bursa posterior/superiorly), the gluteus medius/minimus tendons just proximal to the tip of the trochanter, and the piriformis tendon at the proximal/posterior aspect of the trochanter just posterior to the abductor musculature. The iliotibial band is checked for tightness with the Ober test. Hip abduction strength is evaluated with the hip held in the abducted position against resistance.

A prone examination is then completed. Examination of the hamstrings is best completed in this position, as well as palpation of the ischial tuberosity and proximal hamstring insertion and muscle bellies. Hamstring strength is tested with resisted knee flexion at 90 and 45 degrees. The Thomas test is useful to look for hip flexion contracture while the patient is in this position.

The joint proximal (lumbar spine) and distal (knee) are also evaluated for completeness and to rule out referred pain. This may also be inferred from good history taking.