Most diuretics including carbonic anhydrase inhibitors, loop diuretics, and thiazide diuretics up-regulate distal K+ secretion through several mechanisms. First, these agents interfere with Na+ reabsorption in more proximal portions of the nephron, which increases the load that reaches the distal nephron. The increased Na+ gradient across the apical surface of principal cells increases reabsorption through ENaC channels, which then leads to increased K+ secretion through ROMK channels. Second, these agents cause volume loss, which activates the renin-angiotensin-aldosterone system. One of aldosterone’s effects is to up-regulate ENaC channels, which increases Na+ reabsorption and, by necessity, also increases K+ excretion. Finally, diuretics increase urine ﬂ ow rates through the distal nephron, which stimulates K+ secretion through apical maxi-K channels. 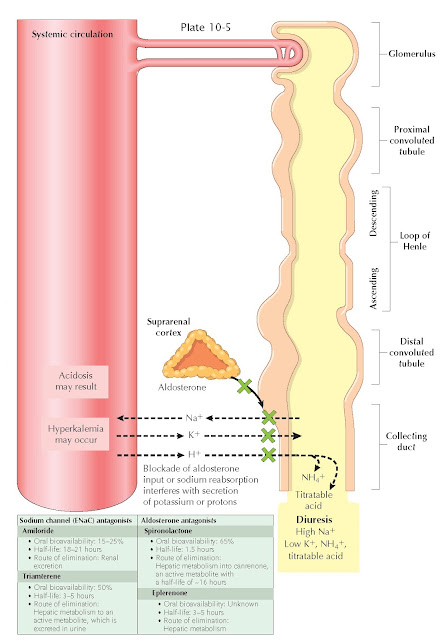 The “potassium-sparing” diuretics interfere with sodium reabsorption across ENaC channels, which produces a small diuretic effect and, more importantly, eliminates one of the major causes of K+ secretion. This category of diuretics encompasses two different classes of agents: those that directly block the ENaC channel (amiloride and triamterene) and those that block aldosterone signaling (spironolactone and eplerenone).

ENaC channel blockers enter the nephron through the organic cation pathway in the proximal tubule. Upon reaching principal cells, these agents bind to the ENaC channel from its luminal side, competing with Na+ ions for negatively charged sites in the pore. Meanwhile, aldosterone receptor blockers remain in the plasma to act at the basolateral surface of principal cells.

Potassium-sparing diuretics usually have only a small diuretic effect. Nonetheless, they can be useful in combination with other classes of diuretics because of their effects on potassium homeostasis. They can also help offset the increase in distal sodium reabsorption that occurs with the use of other diuretics.

The major potassium-sparing diuretics are listed in the plate.

The major indications for potassium-sparing diuretics include:

• Hypokalemia, especially if associated with the use of another diuretic

The major adverse effects of potassium-sparing diuretics include: