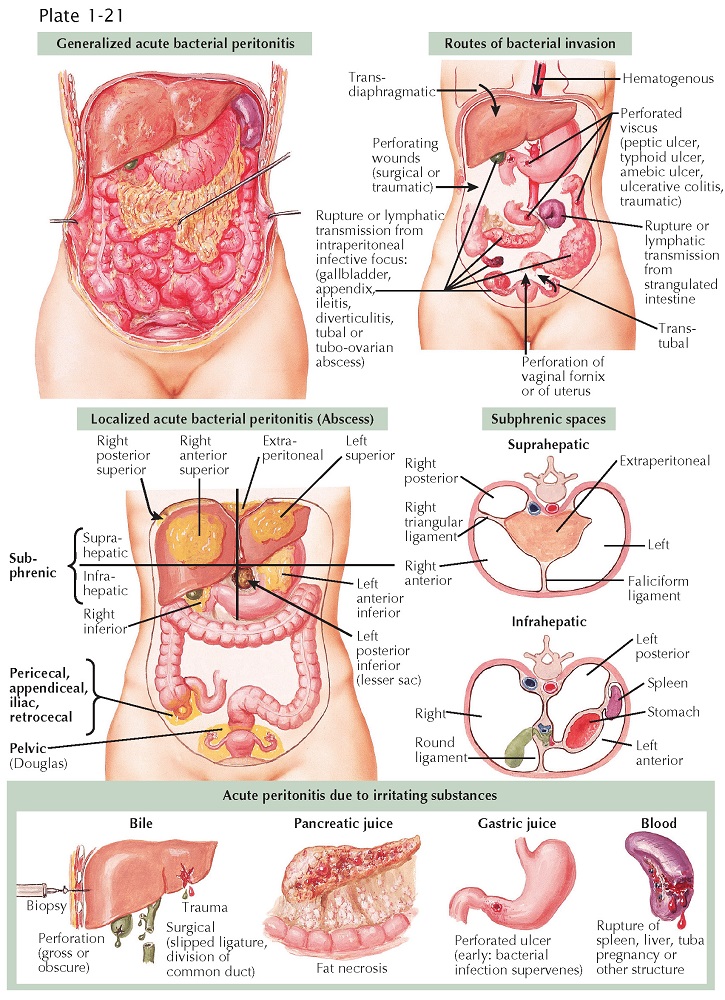 Acute infectious peritonitis results from chemical injury, autoimmune inflammation, or infection from a variety of microorganisms. The latter reach the peritoneum (1) from the exterior by penetrating wounds of the abdominal wall (trauma, surgery), (2) from an infectious process in an abdominal organ via the lymphatics or ostia of the fallopian tubes, (3) by rupture of a viscus, (4) from a distant organ via the bloodstream, or (5) spontaneously without a bowel injury. Rupture of a viscus can result from a wide variety of inflammatory, vascular, or malignant injuries of the bowel. Spontaneous infections result from bacterial translocation across the mucosa and into adjacent fluid, most commonly ascites or dialysis fluid. Infections involve a variety of species of pathogenic microorganisms, including Escherichia coli, streptococci, enterococci, staphylococci, diphtheroids, Clostridium species, Klebsiella, and pneumococci. When peritonitis results from bowel perforation, there is invariably more than one species involved. Identification of the organisms provides clues as to the source of the infection. When multiple gram-negative or anaerobic species are involved that are typical of the intestinal flora, they are a consequence of bowel injury. In contrast, when the organism is atypical for gut flora, such as gonococci, streptococci, or staphylococci, the source is extraintestinal. Gonococcal peritonitis occurs almost exclusively in females as a complication of gonorrheal salpingitis; it is usually confined to the pelvis. A form of gonococcal peritonitis localized in the upper right abdominal quadrant is characterized by the appearance of thin fibrin bands (violin strings) between the anterior surface of the liver, the diaphragm, and the anterior abdominal wall and, clinically, by severe acute pain in this region (Fitz-Hugh–Curtis syndrome). Pneumococcal peritonitis may develop as a complication of a pneumococcal infection elsewhere in the body (e.g., pneumonia, empyema, otitis), but it may occur also as a primary disease; as such, it is observed mostly in female children between the ages of 3 and 7 years, and it is believed that the pneumococci reach the peritoneum from the genital tract through the fallopian tubes.

The course of peritonitis is determined by the quality and quantity both of the injurious agents and of the body’s defenses. The infection may remain localized and walled-in by the adhesion of adjacent structures, or it may spread and become generalized. The pathologic changes are those seen in inflammation of any serous membrane; the peritoneum becomes congested and, owing to the deposition of fibrin, loses its normal sheen. The exudate is serous during the earliest stages but later becomes purulent. The inflammatory process may reach the blood vessels in the mesentery, where thrombosis may develop and determine gangrene in a part of the bowel. A localized peritonitis in the form of an abscess may occur at the primary point of infection or at some distance from it. The most common causes of localized abdominal abscess include those that arise from perforated appendix, diverticulitis, and ruptured cholecystitis. Pelvic abscesses may also result from appendicitis, though they are more commonly due to gynecologic infections. The most important form of localized peritonitis is, however, the subphrenic abscess characterized by the collection of pus in one of the subphrenic spaces. The pus usually originates in the upper abdomen, but it may also come from the right iliac fossa or even the pelvis. The most common causes of a subphrenic abscess are gastric or duodenal perforation, appendicitis, and hepatobiliary infections.

Acute peritonitis may result from the entrance of irritating substances into the peritoneal cavity. Bile may escape from an injury to the intrahepatic or extrahepatic biliary system sustained during trauma or surgical procedures or caused by rupture. Irritating quantities of blood enter the cavity usually from a rupture of the spleen, uterine tube (in a tubal pregnancy), liver, or other structures. Pancreatic enzymes reach the peritoneum in the course of acute hemorrhagic pancreatitis, whereas the entrance of gastric juice results from gastric or duodenal perforation.

The typical symptoms of generalized peritonitis are abdominal pain, rigidity of the abdominal musculature, and vomiting; in the early stages, hyperperistalsis may develop, but as the process extends, paralysis of the intestinal tract sets in. Both the temperature and pulse rate are elevated. The blood picture usually shows leukocytosis. If peritonitis is due to perforation of a hollow viscus, the presence of free air or fluid may be elicited on examination or shown on x-ray imaging. If the infection is virulent and the body’s defenses are poor, the disease is particularly severe and often rapidly fatal.

Related Posts
Home
Give us your opinion