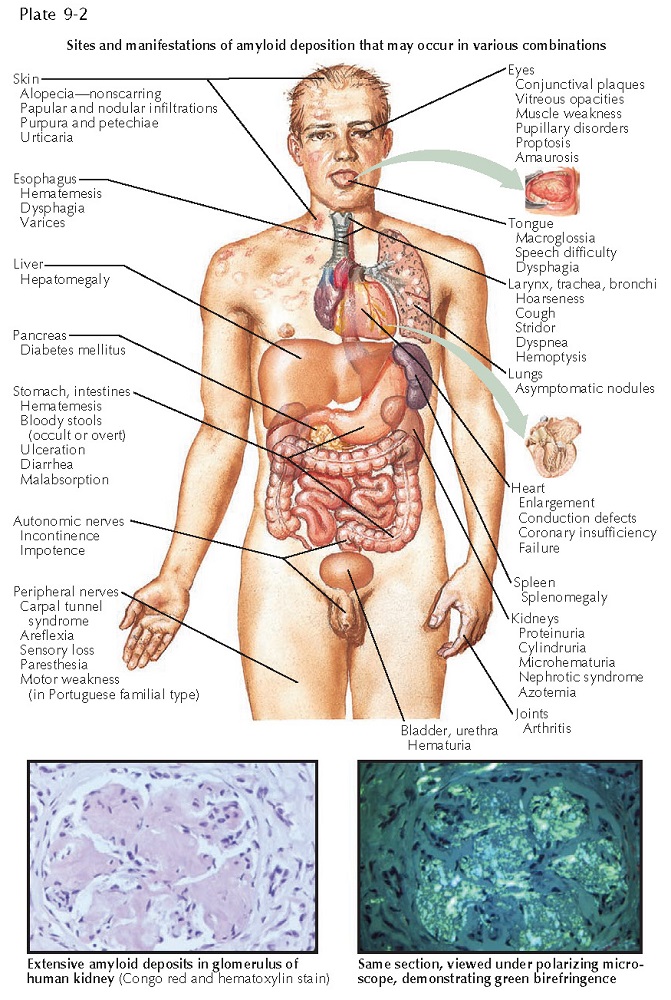 The term amyloidosis refers to a heterogeneous group of diseases. Systemic and cutaneous forms of amyloidosis can occur and are caused by the deposition of one of many different amyloid proteins. The primary cutaneous forms are more frequently seen. They include nodular, lichen, and macular amyloidosis (also referred to as lichen or macular amyloidosis). The systemic form is a multisystem, life-threatening disorder that requires systemic therapy. Most systemic disease is caused by an abnormality in plasma cells; myeloma-associated amyloid is a distant second in incidence. In addition to amyloidosis of the skin, the central nervous system may be involved with amyloidosis, as it is in Alzheimer’s disease.

Clinical Findings: Systemic amyloidosis is caused by abnormal production of amyloid AL protein (immuno-globulin light chains) and its deposition in various organ systems. These effects can be seen in patients with plasma cell dyscrasia or myeloma. Mucocutaneous findings are often part of systemic amyloidosis, and on occasion they are the initial presentation of the disease. The hallmark cutaneous finding is translucent papules and plaques with varying degrees of hemorrhage. These papules are composed of the abnormal AL protein. Soft, rubbery papules may also occur within the oral mucous membranes. Pinch purpura of the skin is almost universal and results from weakening of the superficial cutaneous vessels by deposition of the AL protein. Peri-orbital ecchymoses may circumferentially surround the eye, which has led to the term “raccoon eyes.” The ecchymoses may be induced by coughing or by super-ficial trauma. The palms and soles may have a waxy appearance. The tongue is often strikingly enlarged due to amyloid deposits.

Deposition of the AL protein in close approximation to the dermal elastic fibers produces a rare finding termed amyloid elastosis. Clinically, this may mimic cutis laxa; the skin is easily distensible and lacks elastic recoil.

Deposition of amyloid in the renal glomeruli, liver, or heart muscle can cause significant end-organ damage. Renal insufficiency leading to renal failure is a major cause of morbidity and mortality. Hepatomegaly, leading to fibrosis and liver failure, may occur. Amyloid protein that is deposited in the muscle of the heart may lead to arrhythmias and congestive heart failure.

The primary cutaneous diseases known as lichen amyloidosis and macular amyloidosis are localized to the leg and the back, respectively. Most cases are believed to be directly caused by keratinocyte-derived amyloid protein. There are no systemic symptoms. Patients present with pruritic hyperpigmented macules and papules that may coalesce into plaques. Nodular primary cutaneous amyloidosis is caused by the local production of AL protein by plasma cells in the skin. This condition is extremely rare and may progress to systemic amyloidosis.

Pathogenesis: Systemic AL amyloidosis results from plasma cell dyscrasia or from myeloma-associated disease. It is directly caused by a proliferation of abnormal plasma cells. The plasma cells produce excessive amounts of immunoglobulin light chains, predominantly λ chains. The excessive amounts of AL protein are deposited within the walls of the cutaneous vasculature; this leads to weakening of the walls and is responsible for their easy rupture. The AL protein is deposited in many organ systems. Rarely, the plasma cells produce immunoglobulin heavy chains; this is termed AH protein.

Histology: Amyloidosis is a disease caused by the abnormal deposition of amorphous AL protein in the dermis and subcutaneous tissue. Biopsies of involved skin show eosinophilic deposits on routine staining. The amyloid protein is accentuated with special staining methods such as the Congo red stain. It shows an apple-green birefringence under polarized light microscopy and appears reddish under routine microscopy.