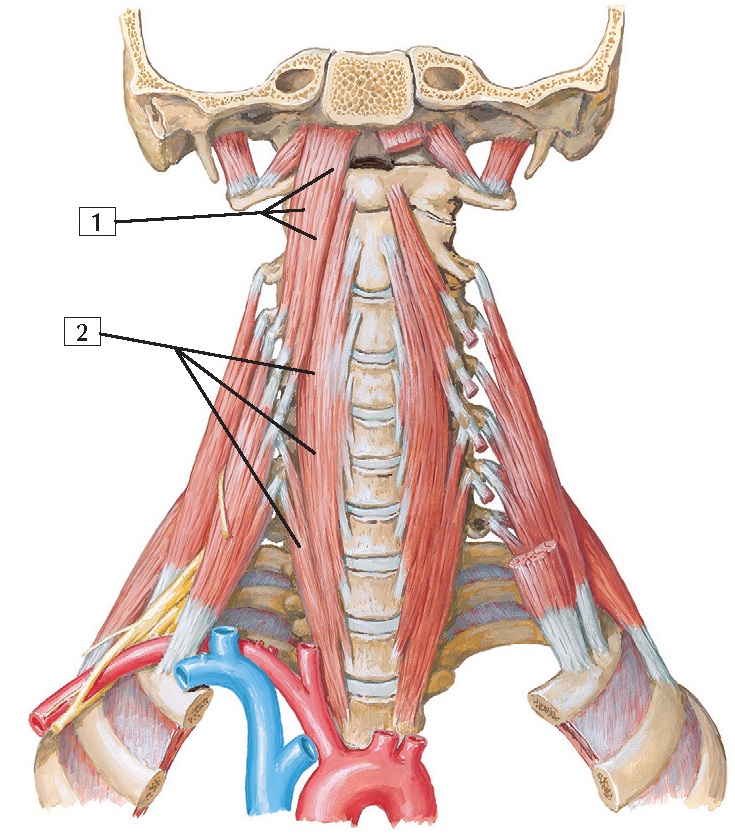 Insertion: The longus capitis attaches to the basilar portion of the occipital bone. The colli portion attaches to the anterior tubercle of the atlas (C1), the bodies of the C2-4 vertebrae, and transverse processes of the C5-6 vertebrae.

Comment: The longus capitis and longus colli lie in front of the cervical vertebrae and are often called prevertebral muscles. They help other muscles flex the cervical spine.

Clinical: These muscles and the scalene muscles comprise anterior muscle groups often lumped together as “prevertebral” muscles. They are encased in a strong fascial sleeve called the prevertebral fascia and do not tolerate swelling well because of this tight enclosure. Just anterior to the prevertebral fascia, where it covers the bodies of the cervical vertebrae, lies the retropharyngeal space (this space is posterior to the buccopharyngeal fascia [the posterior portion of the pretracheal fascia] covering the posterior pharynx and esophagus). Infections in this vertical space may pass superiorly to the base of the skull or inferiorly into the posterior mediastinum of the thorax. 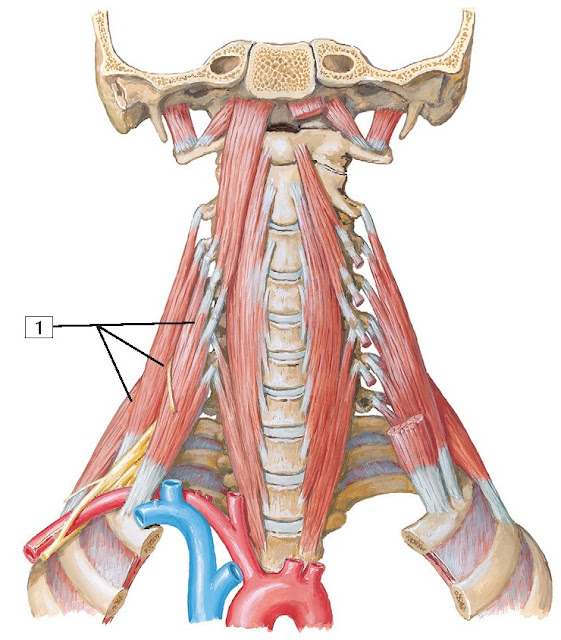 Action: The anterior and middle scalenes elevate the 1st rib. When that rib is fixed, they also flex the neck forward and laterally and rotate it to the opposite side. The posterior scalene raises the 2nd rib and flexes and slightly rotates the neck.

Comment: The scalene muscles are often called lateral vertebral muscles. They form a large portion of the floor of the posterior cervical triangle. Components of the brachial plexus can be seen emerging between the anterior and middle scalene muscles.

Clinical: The scalene muscles are accessory muscles of respiration and help elevate the first 2 ribs during deep or labored breathing. They are crossed by the accessory nerve (CN XI) as it passes between the sternocleidomastoid and trapezius muscles. The phrenic nerve (C3-5) is observed on the anterior surface of the anterior scalene muscle; it courses inferiorly toward the diaphragm, which it innervates. Trauma to the neck can damage these nerves.