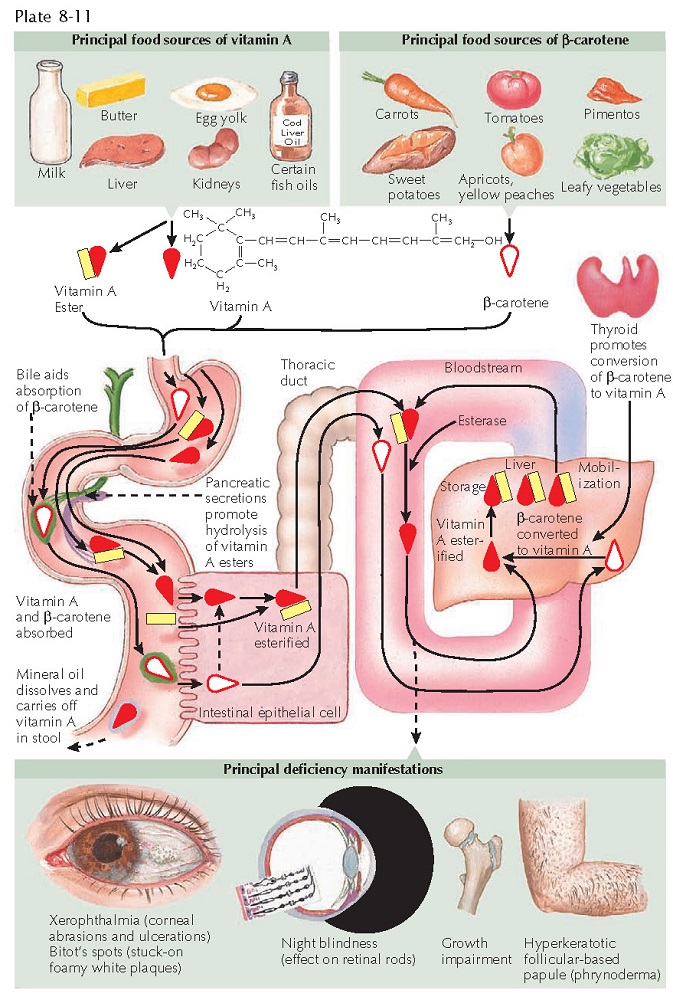 Vitamin A deficiency, also known as phrynoderma, is a multisystem disorder caused by a deficiency of vitamin A, either from lack of intake or from a decrease in normal absorption. Vitamin A is a fat-soluble essential vitamin that is stored in the fatty tissue and liver. Humans require a nutritional source for this vitamin. Foods high in vitamin A include all yellow vegetables (including carrots), green leafy vegetables, liver, milk, eggs, tomatoes, and fish oils. Many other food staples contain vitamin A. Hippocrates may have been the first to describe vitamin A deficiency and a therapy for it. However, it was not until the early twentieth century that scientists recognized the different forms of vitamin A and its carotene precursors.

Clinical Findings: Night blindness is one of the earliest findings in vitamin A deficiency. Vitamin A is crucially important for proper functioning of the retinal rods, through production of rhodopsin. Rhodopsin is the primary rod pigment that makes visual adaption in the dark possible. Xerophthalmia (dry eyes) often pre- cedes the night blindness and is typically the first sign of vitamin A deficiency, although this sign is neither sensitive or specific. As the deficiency progresses, the xerophthalmia may result in corneal dryness, abrasions, ulceration, and keratomalacia, which leads to blindness. Bitot’s spots can be seen on the lateral conjunctiva of the eye. These are highly specific for vitamin A deficiency and appear as stuck-on foamy white papules and plaques that cannot be removed by swabbing. Bitot’s spots are caused by abnormal keratinization of the conjunctival epithelium. It is estimated that vitamin A deficiency is one of the leading causes of vision loss worldwide. Growth impairment in children can be caused by vitamin A deficiency.

Phrynoderma is the name given to the skin findings in vitamin A deficiency. Phrynoderma literally means “toad-like” skin, and it is manifested by hyperkeratotic follicle-based papules. The skin is dry and rough. Patients with vitamin A deficiency may also have cheilitis and glossitis. These latter two conditions are nonspecific and can be seen in a variety of vitamin deficiencies.

Hypervitaminosis A can result from excessive vitamin A supplementation. It manifests as dry skin, hair loss, joint aches, bone pain, and headaches. Vitamin A can cause birth defects when taken in high doses during pregnancy.

Vitamin A is found in foods predominantly as retinol or β-carotene. Vitamin A is critical for nuclear signaling, through binding to its nuclear receptors, the retinoic acid receptors (RARs) and the retinoid X receptors (RXRs). Once this binding occurs, the resulting complexes can affect the transcription of various gene products. The vitamin is responsible for maturation and proliferation of epithelial cells.

Histology: Cutaneous biopsies are nonspecific but may suggest a nutritional deficiency. There is pallor of the upper epidermis. Hyperkeratotic plugs are seen in follicles, with minimal to no inflammatory infiltrate.

Treatment: Treatment requires replacement of vitamin A and probably other essential vitamins in the patient’s diet. The eye changes may be permanent, but the cutaneous findings respond well. Loss of only night vision has been shown to respond to therapy in some cases. Once blindness occurs, however, the only hope for vision is with corneal transplantation. Most cases in North America and Europe are caused by poor absorption due to an underlying cause, and the advice of a nutritionist who is an expert in malabsorption is indicated. These patients may require long-term replacement and monitoring of their vitamin A levels.