Cancer of the uterine corpus usually involves malignant change of the endometrial tissues. These are generally of the adenocarcinoma, adenosquamous, clear cell, or papillary serous cell types. These cancers are the most frequent malignancy of the female reproductive tract, representing the eighth leading site of cancer-related deaths among American women. 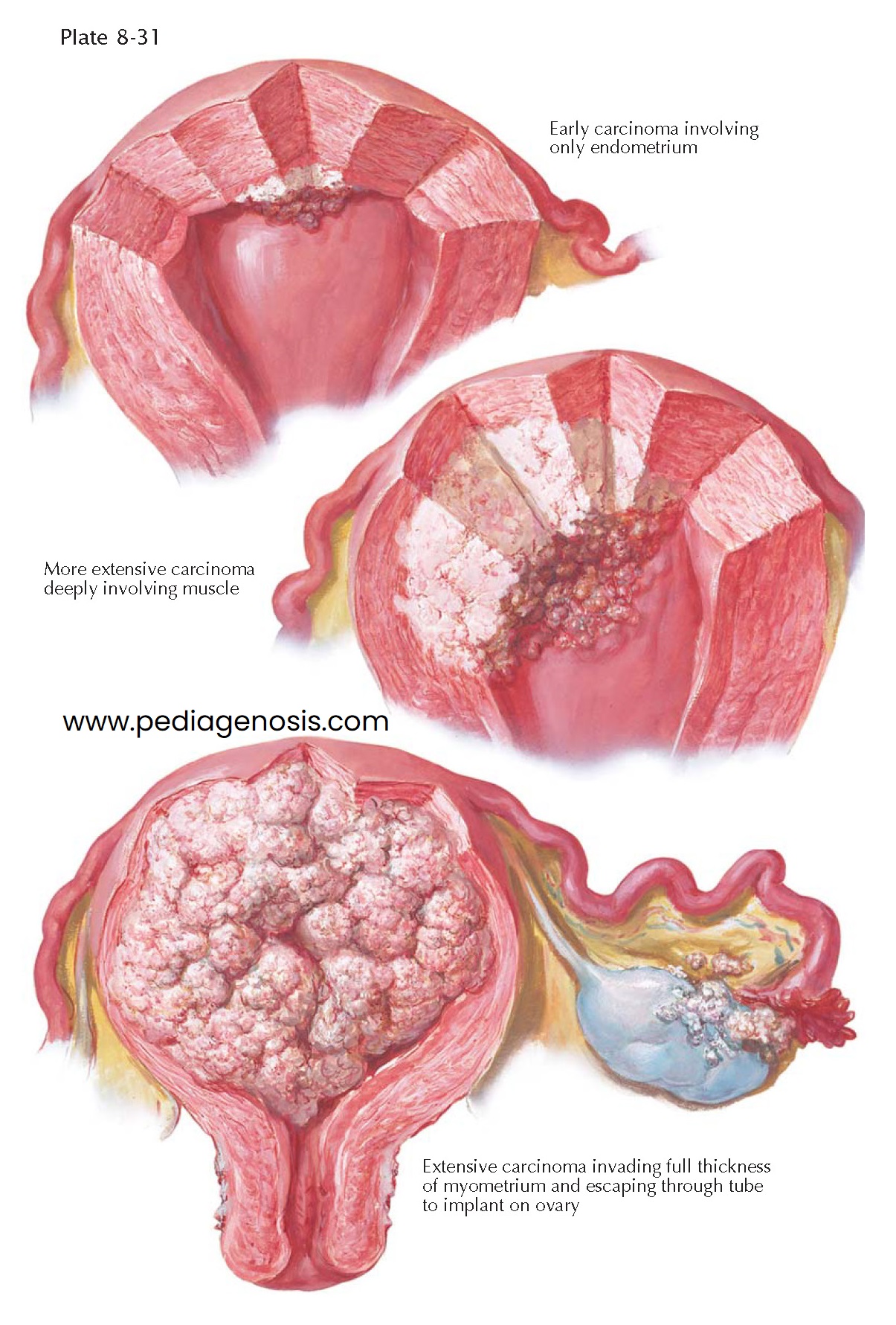 Although the possibility of adenocarcinoma must be considered in patients suffering from abnormal bleeding during preclimacteric years, cancer of the uterine body must always be suspected with the appearance of abnormal spotting or staining from the ﬁfth decade on. Any discharge from a normal cervix occurring in the postmenopausal age group should be regarded as highly suspicious of fundal malignancy. The discharge may at times be watery rather than frankly bloody. Pain, except in the presence of pyometrium, is not an early sign. When present, it may signify extension to other organs. Risk factors for the development of endometrial cancer include unopposed (without progestins) estrogen stimulation (such as in polycystic ovary syndrome, obesity, chronic anovulation, and estrogen replacement therapy without concomitant progestin). This may be a factor in up to 90% of cases. Selective estrogen receptor modulators with uterine activity (such as tamoxifen) may also place the patient at increased risk. Oral contraceptives reduce the risk of endometrial cancer.

If exfoliated malignant endometrial cells are found in the vaginal smear, the diagnosis may be considered deﬁnite. (Cervical cytologic tests detect only about 20% of known endometrial carcinomas.) Transvaginal ultrasonography or sonohysterography may be useful (though some have raised concerns about the possibility of extrauterine spread induced by tubal spill of ﬂuid during sonohysterography). The ﬁnal diagnosis, however, depends inevitably upon tissue sampling and histologic evaluation. Endometrial biopsy is approximately 90% accurate.

In 1988, a surgical staging classiﬁcation was introduced that relies on an operative evaluation with particular emphasis on myometrial invasion in stage I. In stage IA the tumor is limited to the endometrium; IB invasion is to less than half of the myometrium; IC invasion is to more than half of the myometrium. In stage IIA there is endocervical glandular involvement only; in IIB there is cervical stromal invasion. In stage IIIA the tumor invades the serosa and/or adnexae and/ or there is positive peritoneal cytology; in stage IIIB there are vaginal metastases; in stage IIIC metastases to pelvic and/or paraaortic lymph nodes have occurred. Stage IVA includes tumor invasion of the bladder and/ or bowel mucosa, while stage IVB consists of those with distant metastases, including intraabdominal and/or inguinal lymph nodes. Most cases are diagnosed in stage I because of the prompt evaluation of postmenopausal bleeding, improving the overall prognosis which is strongly dependent on the stage of the disease: stage I disease has an approximate 90% 5-year survival, whereas stage IV disease has a survival of less than 10%. The histologic type is also related to prognosis, with the best prognosis associated with typical adenocarcinomas as well as better differentiated tumors with or without squamous elements and secretory carcinomas. Approximately 80% of all endometrial carcinomas fall into the favorable category. Poor prognostic histologic types are papillary serous carcinomas, clear-cell carcinomas, and poorly differentiated carcinomas with or without squamous elements.

Tumor grade and stage both affect the risk of lymph node spread in endometrial cancer. There are differences in the proportion of positive nodes between stages IB and IA cases as well as tumor grade. The frequency of nodal involvement becomes much greater with higher grade tumors and with greater depth of myometrial invasion: the risk of lymph node involvement appears to be negligible for endometrial carcinoma involving only the endometrium and for lower grade tumors with a depth of invasion involving only the inner one-third of the myometrium.