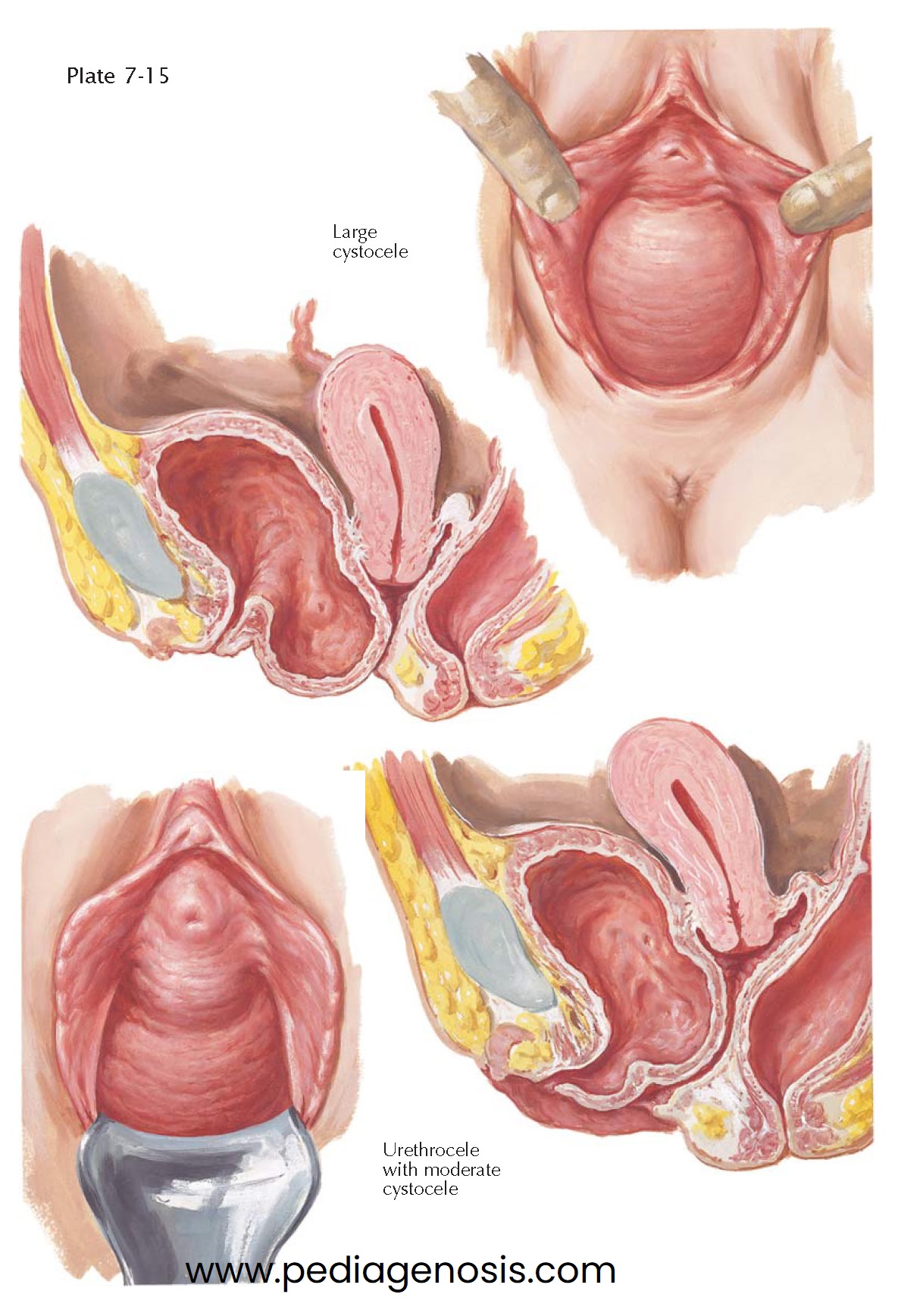 A cystocele or urethrocele results from a loss of support for the anterior vagina, through rupture or attenuation of the pubovesicocervical fascia, manifested by descent or prolapse of the urethra (urethrocele) or bladder (cystocele). With the stretch or rupture of the principal muscular supports of the vagina and the breach of the pelvic fascia in the pubovesicocervical plane during parturition, the bladder may push forward and downward through the anterior vaginal wall to form the hernia known as cystocele. Although a minor defect of this type is the rule rather than the exception in parous women (10% to 15% of women, 30% to 40% after menopause), the size of such hernias depends on a variety of factors, among them the number and difﬁculty of previous deliveries, the general condition of the individual prior to delivery, and the quality of pre-and postpartum care. The cystocele may undergo further exacerbation between pregnancies, or in the postmenopausal period as a result of conditions that tend to increase the intraabdominal pressure such as obesity, chronic cough, heavy lifting, intrinsic tissue weakness, or atrophic changes caused by estrogen loss. Some authors include smoking as a risk factor. There is some experimental evidence that changes in gene activation after childbirth can affect elastin production and repair, increasing the risk of pelvic support defects.

Several classiﬁcation systems are used for deﬁning the extent of the support defect encountered. Small cystoceles, involving only a slight deviation from the normal, are referred to as ﬁrst degree; those that advance nearly to the introitus are second degree; those that come to the introitus or beyond are third degree. Other classiﬁcations use a four-step designation with the differentiation between the third and fourth degrees being the level of the hymenal ring. The POP-Q assessment system is a much more detailed method of quantiﬁcation that is used extensively for research but has failed to gain wide clinical usage.

A cystocele does not necessarily cause symptoms. If the hernia is large enough to produce incomplete voiding, the stasis leads to recurrent attacks of cystitis with dysuria, frequency, nocturia, and stress incontinence. The individual may complain of suprapubic pressure, a dragging sensation in the pelvis, or the presence of a vaginal mass. Pain and dyspareunia are rare symptoms.

Stress urinary incontinence is a common presenting complaint for these patients. Cystocele and urethrocele can be demonstrated by pressing against the perineum of a patient in the lithotomy position and having her strain. Occasionally, it is necessary to have the patient stand to determine the degree of herniation and incontinence present. An evaluation of urinary function is advisable, especially if surgical therapy is being considered. In the past, the functional signiﬁcance of a cystourethrocele was gauged by elevating the bladder neck (using ﬁngers or an instrument) and asking the patient to strain (referred to as a Bonney or Marshall- Marchetti test). This test has fallen out of favor as nonspeciﬁc and unreliable. Anterior support failures are best demonstrated by having the patient strain or cough while observing the vaginal opening through the separated labia. When a urethrocele or cystocele is present, a downward movement and forward rotation of the vaginal wall toward the introitus is demonstrated. A Sims speculum or the lower half of a Graves, Peterson, or other vaginal speculum may be used to retract the posterior vaginal wall, facilitating the identiﬁcation of the support defect.

Treatment generally consists of weight reduction, treatment of chronic cough (if present), and any infections. Topical or systemic estrogen therapy is often prescribed, but the evidence is controversial. Speciﬁc measures include pessary therapy, pelvic muscle exercises, and surgical repair.