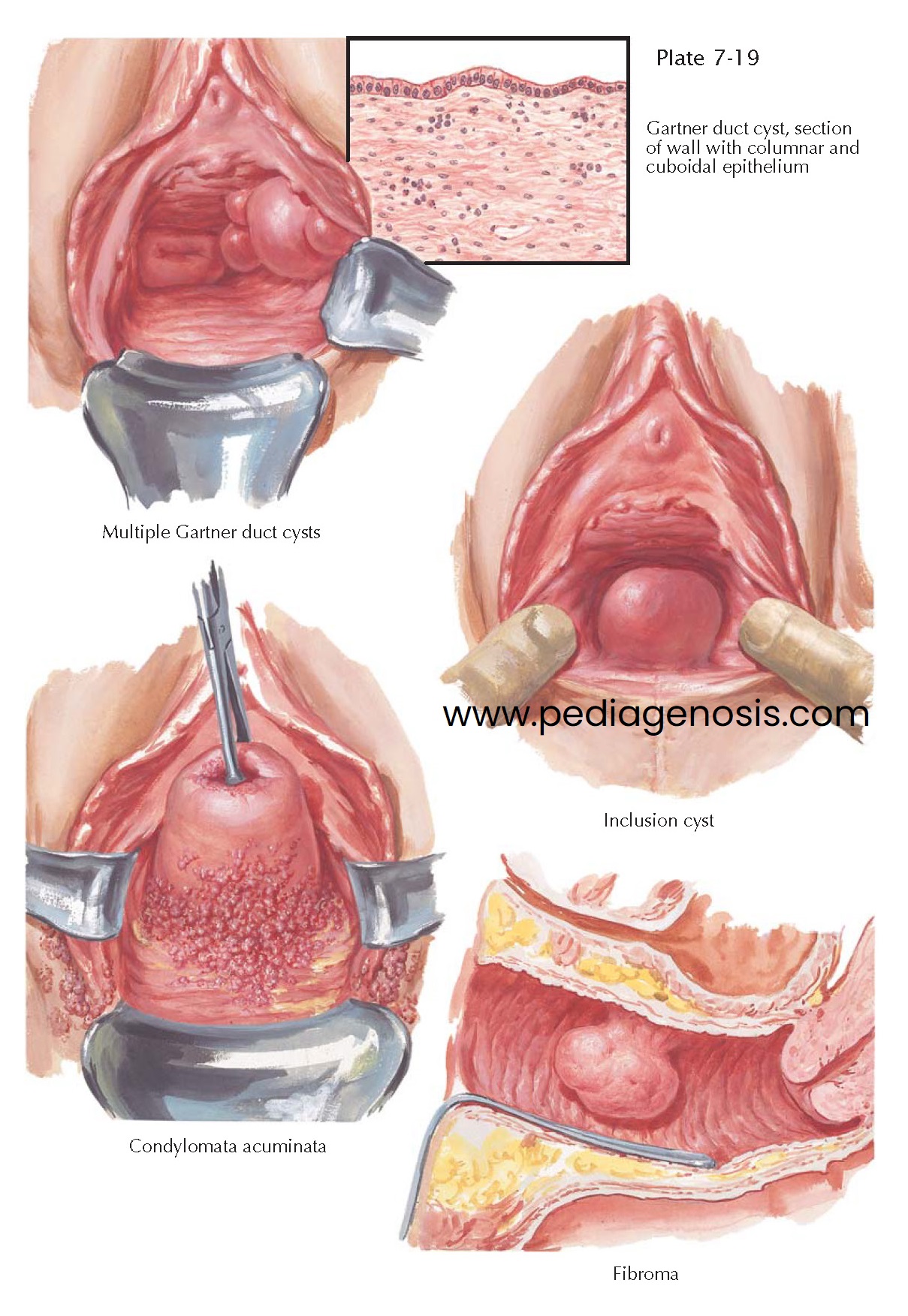 Vaginal tumors are relatively rare, but it is likely that the actual occurrence is more common than recognized, because many of these tumors are asymptomatic and therefore go unnoticed and untreated. Benign tumors are more prevalent than malignant and, of these, cysts are the most prevalent. Vaginal cysts are formed chieﬂy from embryonic epithelial remnants, which may be derived from either the müllerian or wolfﬁan ducts, the latter giving rise to the Gartner duct cysts found on the anterolateral vaginal walls. Gartner duct cysts are blind pouches formed at the branching lower ends of the primitive mesonephric tubules. They may be single or multiple and seldom attain large size. Occasionally, a cyst of this type is large enough to occlude the vaginal canal and resemble a cystocele. In such cases, the patient may have pain, dyspareunia, bladder pressure, or even dystocia during parturition. Because the wolfﬁan duct crosses the anlagen of the broad ligament and the uterus before entering the anterolateral vaginal wall, it is not unusual for cysts of mesonephric origin to extend well upward between the leaves of the broad ligament, increasing the hazard of surgical excision. These cysts, often an incidental ﬁnding on routine pelvic examination, need not always be excised, although some uncertainty as to the exact histologic nature of the lesion must exist when the physician decides on conservative management. The histologic architecture is extremely variable. The epithelial lining may consist of a single layer of cuboidal or high columnar epithelium, or either of these types may be stratiﬁed. Occasionally, they are lined by stratiﬁed squamous epithelium. A few inﬂammatory cells may be present in the stroma, and, in a very rare exception, the cyst may undergo acute infection and suppuration but never malignant degeneration.

Congenital cysts of müllerian origin may occur in the fornices or lower in the vagina and are often referred to as inclusion cysts. They are remnants that have been pushed aside and buried by the advancing superﬁcial epithelium of the urogenital sinus. Some inclusion cysts are formed when the adult vaginal epithelium is turned into the subepithelial tissues as a result of the trauma of delivery or vaginal surgery. These are usually in the posterior wall near the introitus. Inclusion cysts average less than 1 cm in diameter and are seldom larger than 3 cm. They are often asymptomatic but may cause dyspareunia or make the patient conscious of the presence of a lump. The excised specimens are usually of bluish color and ﬁrm consistency and, when opened, contain thick, glairy mucus in contrast to the thin secretion of Gartner duct cysts. The lining cells may be columnar or squamous. Inclusion cysts can be easily removed but, when asymptomatic, need no treatment.

Papilloma and condylomata acuminata occur in the vagina as well as on the external genitalia. Their gross and microscopic characteristics are not modiﬁed by their vaginal location. Condylomata are grouped near the vestibule on the posterior and lateral walls or high in the posterior fornix. They produce a foul discharge, especially when they become large and infected, and must be carefully differentiated from malignancy and the venereal granulomas before appropriate treatment is instituted. Local application of podophyllin, trichloroacetic acid, or other topical therapies eradicates the majority of small lesions.

Fibroma and myoma are quite common in the vagina but are seldom of a size sufﬁcient to produce symptoms. The rare case may be large and pedunculated. These tumors are usually insensitive but may occasionally cause local discomfort. Surgical excision is indicated, since malignancy cannot be excluded grossly.

Other benign vaginal tumors, such as lymphangioma and mole, are extremely rare.