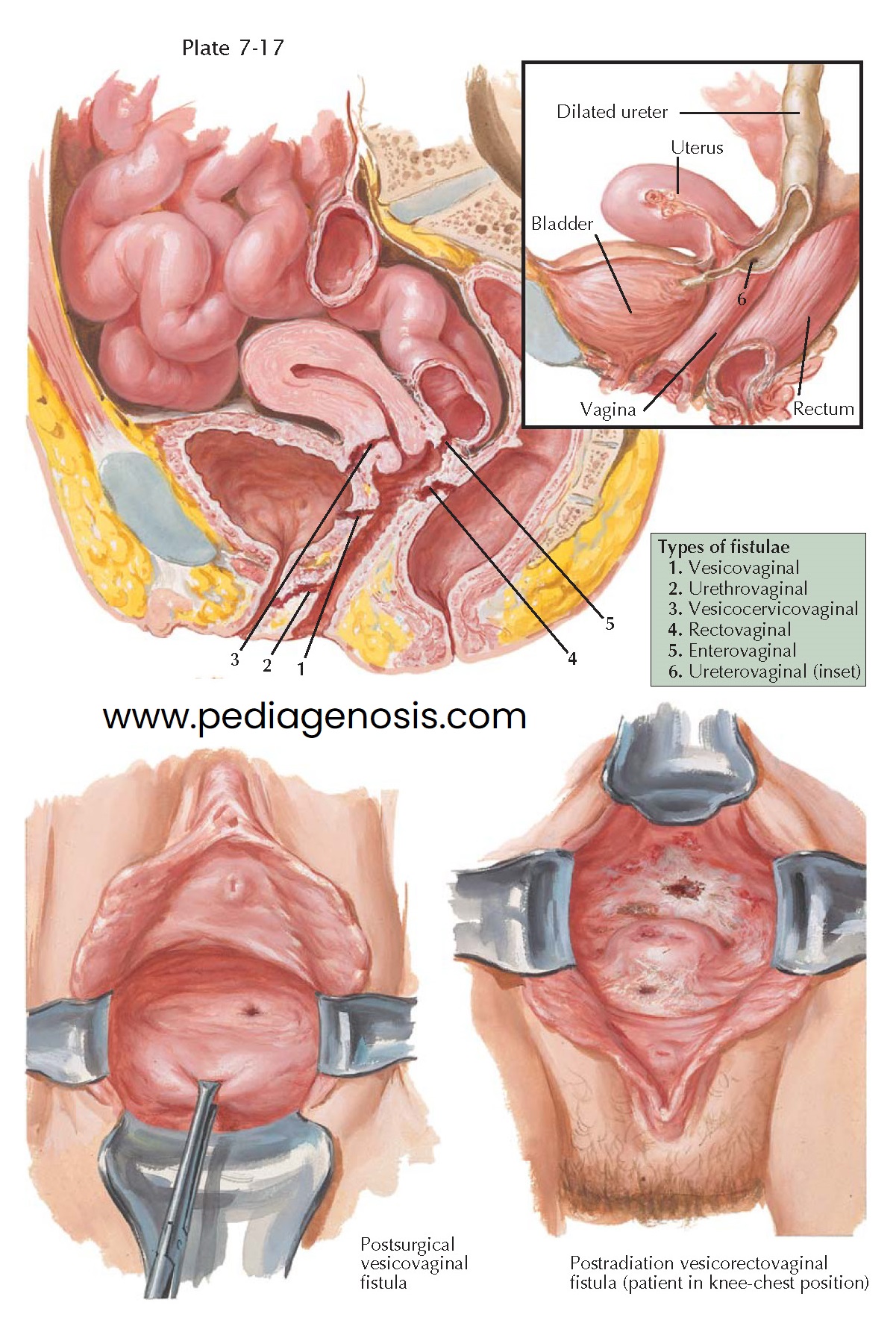 A ﬁstula is an abnormal communication between two cavities or organs. In gynecology, this usually refers to a communication between the gastrointestinal or urinary tracts and genital tract. Because of its anatomic location in close apposition to the bladder and rectum, the vagina is occasionally the site of ﬁstulae, which divert the urinary and fecal streams, causing incontinence. These ﬁstulae may occur in any part of the vaginal canal and are sometimes multiple.

Urinary tract ﬁstulae may result from surgical or obstetric trauma, irradiation, or malignancy, although the most common cause by far is unrecognized surgical trauma. Roughly 75% of urinary tract ﬁstulae occur after abdominal hysterectomy. Urinary tract ﬁstulae are most common after uncomplicated hysterectomy, although pelvic adhesive disease, endometriosis, or pelvic tumors increase the individual risk. Signs of a urinary ﬁstula (watery discharge) usually occur from 5 to 30 days after surgery (average 8 to 12), although they may be present in the immediate postoperative period. If the defect is small, it may spontaneously heal with simple catheter drainage (20% to 30% of patients). More severe defects should not be repaired until the tissues have returned to normal condition. Final repair may be by the transvaginal, transvesical, or transperitoneal routes, depending on the size and position of the opening. Cystoscopy may be required to evaluate the location of a urinary tract ﬁstula in relation to the ureteral opening and bladder trigone and to exclude the possibility of multiple ﬁstulae.

Vesicocervicovaginal ﬁstulae are relatively uncommon and are usually caused by cancer of the cervix or surgical injury to the bladder in the course of a subtotal hysterectomy. A ﬁstulous tract in this area is often difﬁcult to identify and to close.

Fistulae between the gastrointestinal tract and vagina may be precipitated by the same injuries that cause genitourinary ﬁstulae; most common are obstetric injuries and complications of episiotomies (lower one-third of vagina). Fistulae may also follow hysterectomy or enterocele repair (upper one-third of vagina). Inﬂammatory bowel disease or pelvic radiation therapy may hasten or precipitate ﬁstula formation. Although Crohn disease, lymphogranuloma venereum, or tuberculosis are recognized risk factors, these are uncommon. For those that do not heal spontaneously (75% of ﬁstulae), the only effective treatment is surgical. Repair of these ﬁstulae may necessitate diversion of the fecal stream by colostomy prior to deﬁnitive closure. The scarring and puckering of surrounding tissues produced by radiation therapy greatly reduces the chances of successful closure. Such lesions must always be biopsied to rule out the possibility of residual malignancy. Surgical treatment of these defects is complicated, because the underlying pathologic process is usually still progressing and the results are poor.

Surgical mismanagement accounts for most ureterovaginal ﬁstulae. In the course of hysterectomy, the ureter may be compressed by clamp or suture just before it enters the bladder wall, resulting in obstruction, necrosis, and formation of a new urinary outlet through the upper vagina. Urinary incontinence of this type can be differentiated from that due to vesicovaginal ﬁstula by observing the vagina after the introduction of a dye into the bladder. Ureterovaginal ﬁstulae are of serious signiﬁcance because measures to restore the continuity of the urinary tract may be unsuccessful with loss of the involved kidney.

Occasionally, a combined vesicorectovaginal ﬁstula converts the vagina into a cloaca.