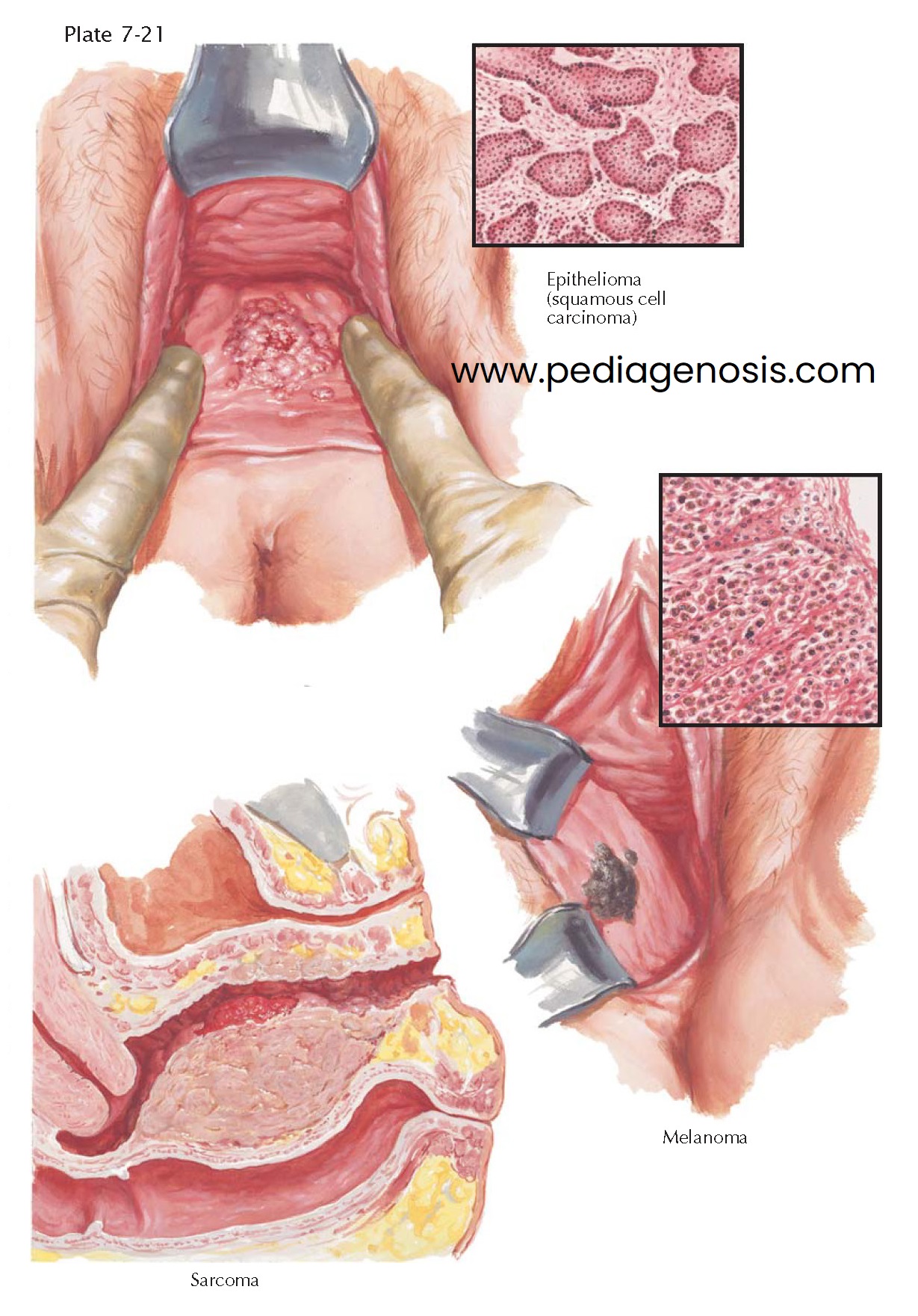 Primary carcinoma of the vagina comprises approximately 1% of all malignancies in the female genital tract and ranks after carcinomas of the cervix, endometrium, ovary, and vulva in order of frequency. The lesion is most often located on the posterior vaginal wall and in the upper half of the vagina. Its early stage may be a small, irregular ulceration or a papillary, friable growth. The disease spreads by direct extension and gradually inﬁltrates the lateral and anterior walls of the vagina, extends into the rectovaginal or vesicovaginal septum, and eventually invades adjacent pelvic viscera. Later, the tumor disseminates by way of the pelvic lymphatics to the lymph glands in the iliac, obturator, and hypogastric areas. Distant metastases are rare.

The differential diagnosis must exclude the venereal granuloma and the possibility that the tumor is secondary. Laboratory diagnosis by vaginal biopsy is conclusive. Nearly always, vaginal cancer is of the squamous cell type and may be either a well-differentiated epithelioma or a wildly growing anaplastic tumor. The strongest association is between squamous cell carcinoma and human papilloma virus (HPV) types 16 and 18 infections. The exceedingly rare adenocarcinoma of the vagina probably arises in aberrant cervical glands of müllerian origin or in remnants of the meso- nephric duct.

Radiation is probably the best overall type of therapy except in very early stage disease. Radium needles can be inserted interstitially and should be followed by deep x-ray therapy to the pelvis. If radical surgery is undertaken, it may be possible to remove the vaginal lesion with a wide margin, but a satisfactory excision frequently necessitates the sacriﬁce of the adjacent bladder or rectum as well as the pelvic and inguinal lymphatic drainage from the area. The 5-year salvage following either form of treatment is very low when the tumor is advanced.

Even more uncommon than carcinoma of the vagina are malignant tumors of connective tissue origin. Vaginal sarcomas are of two main histologic types. One occurs chieﬂy in adults and occupies a typical position in the muscle or submucosal layers of the posterior vaginal wall, elevating and ulcerating the epithelium above it. Because these tumors tend to outgrow their blood supply, a wide area may slough. Growth proceeds by direct extension to involve the entire vagina, but hematogenous spread may also occur, with metastases to the lungs and other distant organs. Microscopically, these sarcomas may be of spindle cell, round cell, or mixed cell types.

A rare form of sarcoma (embryonal rhabdomyosarcoma) is generally found in the vagina of young girls. Rarely, these tumors may arise from the cervix. Although the cervical form of sarcoma is histologically similar to the vaginal form, the prognosis for the cervical form is better. Grossly, it forms large grapelike clusters of tissue, which eventually protrude from the vaginal oriﬁce and cause bleeding and foul discharge as a result of superﬁcial necrosis. The tumor is often multicentric, with loose myxomatous stroma containing malignant pleomorphic cells and eosinophilic rhabdo- myoblasts that have characteristic cross-striations (strap cells). Treatment is surgical excision combined with multiagent chemotherapy. Adjunctive radiation therapy has also been advocated but is generally reserved for those with residual disease.

Melanoma of the vagina is unusual, but an occasional case is reported. A primary focus elsewhere must be sought, because disease in this area is more often secondary. It does not differ in its gross or microscopic appearance from melanomas elsewhere. The large, anaplastic, pigmented cells are pathognomonic. Melanoma in the vagina is almost uniformly fatal.

Other rare primary malignancies of the vagina have been reported, including teratomas and clear cell carcinomas, the latter associated with maternal use of diethylstilbestrol during pregnancy.