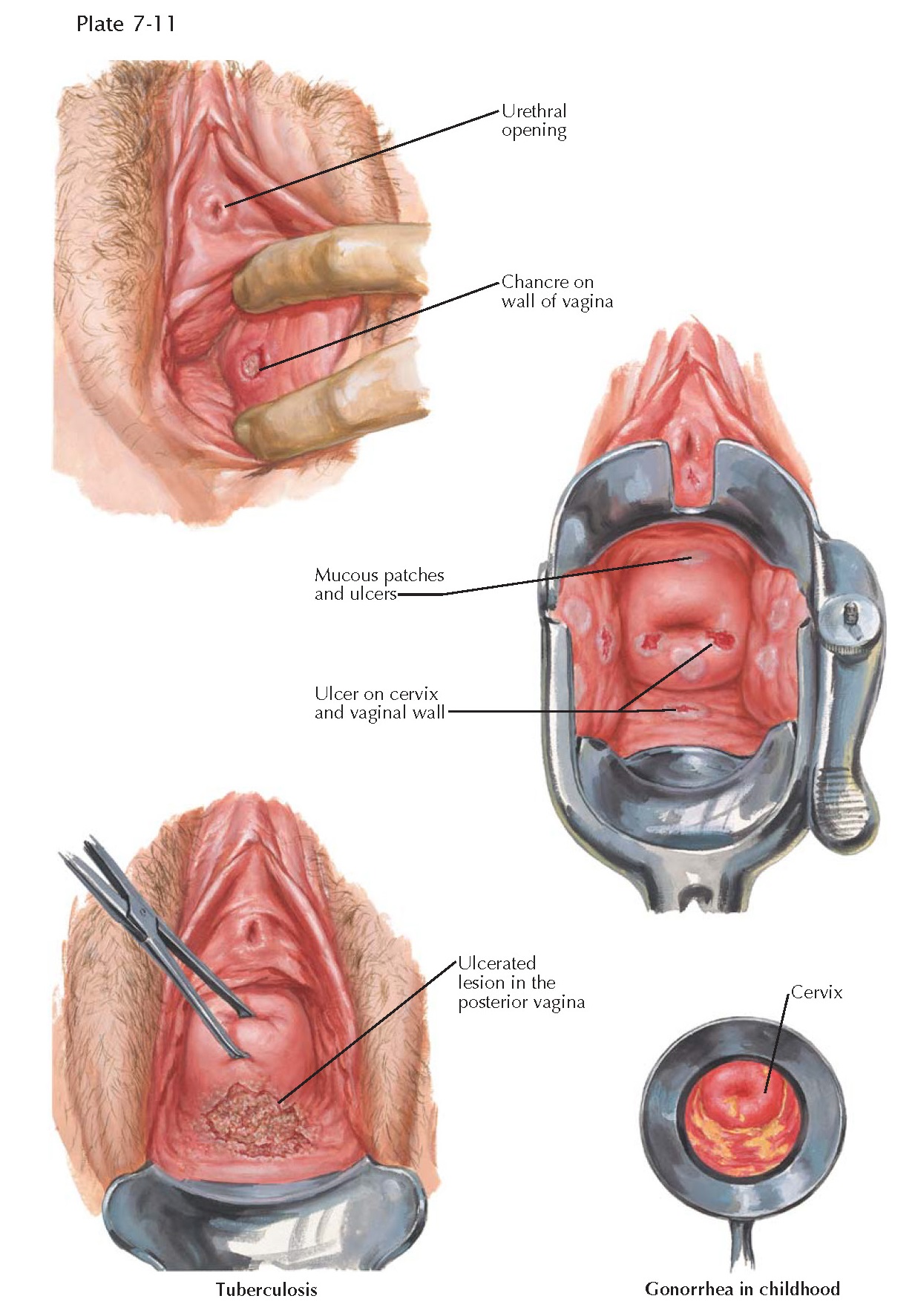 In clinical practice an occasional case is seen in which the differential diagnosis of a lesion in the lower genital tract involves the exclusion of syphilis. In the female, primary lesions occur more often on the external genitalia and less frequently in the vagina or on the cervix. If in the vagina, a chancre is most likely to be near the vestibule, with no predilection for anterior, posterior, or lateral walls. It has the characteristic raised, indurated border surrounding a shallow ulceration. Because the disease is often in the lower third of the vagina, associated inguinal lymphadenopathy may be present. Although routine serologic tests are frequently negative at this stage, dark-ﬁeld examination should lead to the proper diagnosis, and a biopsy can rule out other granulomas, carcinoma, or various infections. The mucous patches of late syphilis also occur in the vagina as well as on the external genitalia. They are white, vesicular lesions, which may coalesce and break down to form shallow ulcers and are not to be confused with the ﬁrm, raised condylomata lata, which are also late manifestations of syphilis. At this stage, a positive serologic test should indicate the probable diagnosis; a dark-ﬁeld examination of scrapings is usually positive for Treponema pallidum. The Venereal Disease Research Laboratory (VDRL) and rapid plasma reagin (RPR) tests are good screening tests and the ﬂuorescent treponemal antibody absorption or microhemagglutination T. pal-lidum tests are speciﬁc treponemal antibody tests that are conﬁrmatory or diagnostic. Screening for HIV infection should also be strongly considered.

Because of the resistance of the thick vaginal epithelium during reproductive life to neisserial organisms, gonorrhea in the vagina is less common than in Bartholin and Skene glands or in the upper genital tract. However, at the extremes of age, in the postmenopausal period and especially in childhood, gonorrheal vaginitis is a deﬁnite clinical entity. Vaginitis in a child can be examined through a cystoscope or hysteroscope, which is easily introduced through the small introitus and affords an excellent view. The yellow, purulent exudate, which is often the presenting symptom, covers the inﬂamed vaginal walls, and the cervix often shows extensive erosion around the external os. A malodorous, purulent discharge from the urethra, Skene duct, cervix, vagina, or anus (even without rectal intercourse) 3 to 5 days after exposure (40% to 60%) may also be present. The diagnosis can be made by smears or cultures, although negative results are not conclusive.

Tuberculosis seldom affects the vagina, although the increase in immunocompromised individuals (natural or iatrogenic) as well as the rise in international travel have resulted in an increase in the incidence of this infection. At one time, it constituted approximately 2% of disease of the upper genital tract and appeared occasionally on the external genitalia as lupus vulgaris. When found in the vagina, it is secondary to tuberculosis of the fallopian tubes, uterus, and cervix and is usually located in the posterior vaginal fornix, which is most likely to receive the infected discharge from the uterine cavity. A rare case may result from coitus with an individual who harbors acid-fast organisms in his seminal tract. Vaginal lesions are of the miliary type, with the white seedings eventually coalescing to form a large ulceration and producing a foul discharge. Diagnosis is made by smears and cultures, as in other forms of tuberculosis, but a biopsy is a quick and accurate way of securing the correct answer. A careful search should be made for tuberculosis elsewhere in the body, and treatment should include the use of the systemic drugs, plus resection of foci in the upper genital tract and of the vaginal lesion if it is not too extensive.