Small bowel manometry, also known antroduodenal manometry, is a procedure that assesses small bowel motility. It involves placing a long tube with pressure sensors into the small intestine past the stomach. These sensors are able to measure intraluminal pressure induced by smooth muscle contractions. The test generally takes 6 hours, with the patient fasting during the first 4 hours; the patient then eats a standard meal, and a postprandial recording is made during the next 2 hours. 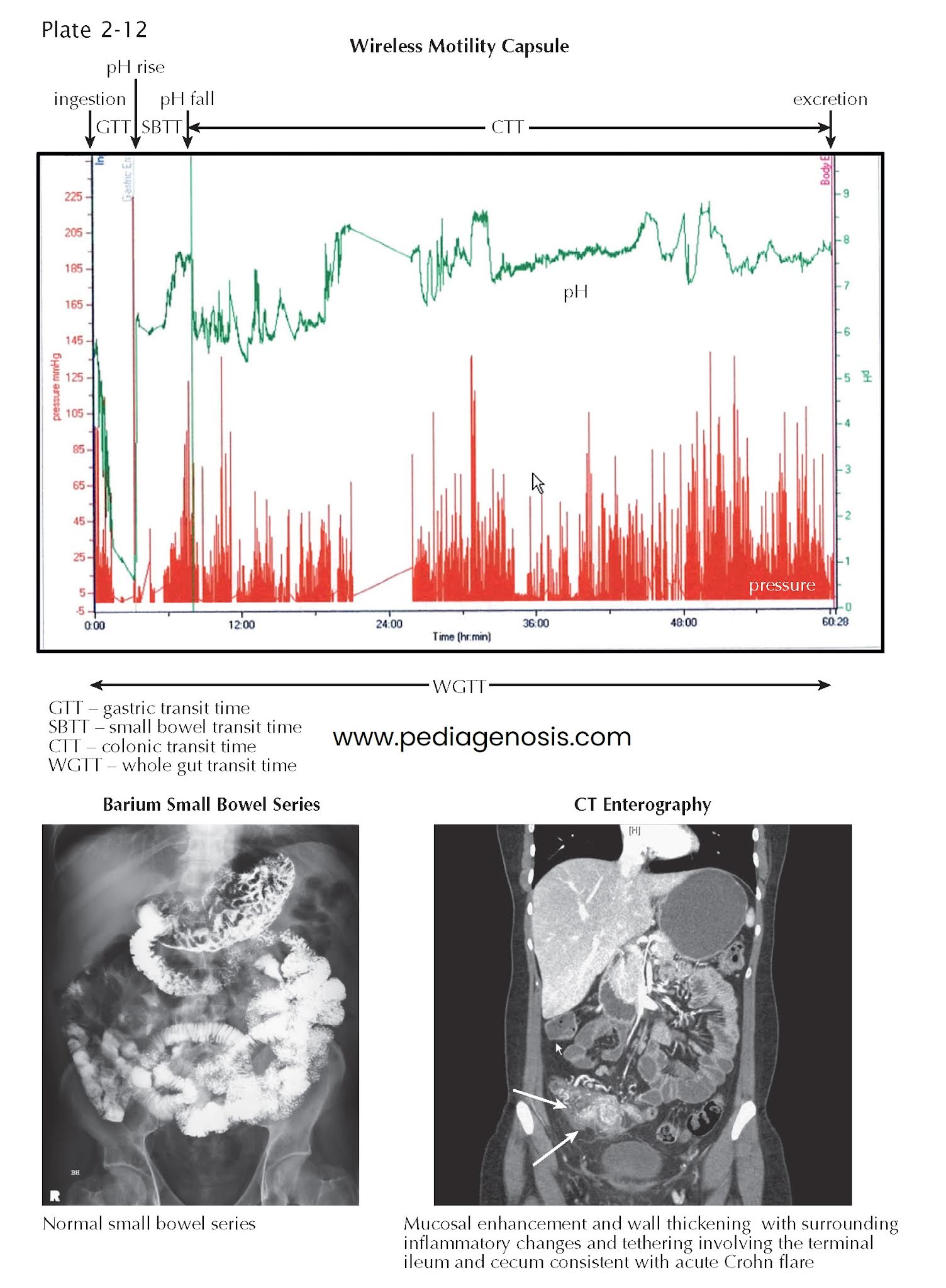 The wireless motility capsule system or SmartPill Motility Monitoring system is a useful diagnostic tool that can be used to assess gut transit time. The system consists of a wireless ingestible motility capsule that the patient swallows, a portable data receiver worn by the patient for acquiring data, and data analysis software. It senses pH, temperature, and pressure, and the data can be reviewed in real time or after study completion. The small bowel transit time is defined as the time interval between capsule entry into the small bowel and its entry into the cecum. Delayed small intestinal transit is determined when transit times exceed 6 hours (range, 2 to 6 hours), based on 95% cutoff values from control studies. Small bowel scintigraphy provides valuable physiologic and quantitative information and allows the assessment of the orocecal transit time. The test involves ingestion of either a liquid or solid material labeled with 111indium or 99mtechnetium and obtaining of sequential scans over several hours. The small bowel transit time can be calculated as the time for 10% or 50% of the activity to arrive at the terminal ileum or cecum after correcting for gastric emptying. A more specific measure of duodenocecal transit involves the use of a 99mtechnetium- hepatobiliary iminodiacetic acid intravenous tracer, which is taken up by the liver and excreted in the bile directly into the duodenum; this avoids the influence of gastric emptying on scintigraphic measurement of small bowel transit; there is limited published information regarding this technique, however.

Nutrient absorption occurs in the small intestine, and, consequently, disorders of the small intestine commonly cause malabsorption. The gold standard test of fat malabsorption (steatorrhea) is the quantitative 72-hour fecal fat determination, which requires stool collection for 3 to 5 days while the patient consumes a high-fat diet (usually, 100 g/day). Stool fat analysis is performed via the traditional van de Kamer method; an alternative, less cumber-some method, near-infrared reflectance analysis, is also available. The latter has excellent correlation with the van de Kamer method and allows for simultaneous measurement of fecal fat, nitrogen, and carbohydrates in a single sample. Daily fecal fat excretion in healthy individuals is usually less than 6 g/day, but values up to 14 g/day can be seen with diarrhea. Qualitative tests that can be performed on a spot sample of stool are also available and include the Sudan III stain test and the acid steatocrit test. If properly performed, these tests can detect more than 90% of patients with clinically significant steatorrhea; however, they cannot replace the 72-hour stool collection.

Carbohydrate absorption can be assessed by a blood test such as the lactose tolerance test, where blood glucose levels are monitored after oral administration of a 50-g test dose of lactose or by breath tests. Breath tests are based on the fact that unabsorbed carbohydrates reaching the colon are fermented by the colonic microflora, leading to an increase in gases, specifically hydrogen, carbon dioxide, and methane, that can be measured in the breath. Specific forms of carbo- hydrate malabsorption (e.g., lactose, fructose, sucrose, sorbitol, and others) can be diagnosed with these tests. The D-xylose test is a measure of the absorptive capacity of the proximal small bowel. The test is performed by measuring D-xylose levels in venous blood and urine after oral administration of a 25-g dose of D-xylose. Low blood levels and urinary excretion suggest mucosal disease such as celiac disease; however, levels are normal in pancreatic insufficiency because pancreatic enymes are not required for the absorption of D-xylose.

The classic test for quantifying protein malabsorption, measurement of fecal nitrogen content in a quantitatively collected stool specimen, is rarely used. Enteral protein loss can be established by determining the clearance of alpha-1 antitrypsin from plasma. Alpha-1 antitrypsin is a protein synthesized in the liver and has a molecular weight similar to that of albumin. It is neither actively secreted nor absorbed in the intestine and resists proteolysis; therefore, it is excreted in the stool while still intact. A blood sample and a 24-hour stool collection are required to measure alpha-1 anti- trypsin clearance. The presence of an elevated alpha-1 antitrypsin level above the normal values is diagnostic; however, diarrhea can interfere with the test, and if a gastric source of the protein is suspected, the test should be performed while the patient is receiving anti- secretory therapy.

Plain abdominal radiography is usually the first-line imaging study obtained when intestinal obstruction is suspected. Typical findings include dilated bowel loops with or without air-fluid levels. Thickened small bowel walls can sometimes be demonstrated on plain x-rays; contrast is usually necessary to enhance the luminal processes, however. Barium examination of the small bowel allows good mucosal detail and can provide useful information on luminal irregularities or narrowing as seen in Crohn disease. Small intestinal diverticuli, fistulae, and mural or intraluminal filling defects can also be visualized with these studies. Small bowel barium studies can be performed via two methods. In a small bowel follow-through, the patient drinks a barium suspension and films are taken every 20 to 30 minutes until the barium reaches the terminal ileum. A small bowel enteroclysis requires nasojejunal intubation with a 10 Fr catheter and infusion of barium suspension to achieve optimal small bowel distention. Spot films of the small bowel with compression views to separate small bowel loops and visualize the terminal ileum are taken. Conventional computed tomography (CT) scans of the abdomen and pelvis lack the mucosal detail of small bowel barium studies but are able to identify small bowel wall thickening and associated extraluminal dis- eases such as fat wrapping, fistulae, abscess formation, lymphadenopathy, or local and metastatic tumor spread from small bowel neoplasms. CT enterography and CT enteroclysis permit viewing of enhanced bowel wall and mucosal abnormalities and combine luminal imaging with an examination of extraintestinal disease. These tests use large volumes of enteral contrasts, 1500 to 2000 mL; either a positive enteral contrast agent without an intravenous contrast agent or a neutral enteral contrast agent with an intravenous contrast agent is used. Limitations of CT enterography are rep- resented by poor toleration of the high volume of enteral contrast material and by the high radiation dose involved. Magnetic resonance imaging (MRI) offers excellent soft tissue resolution with no ionizing radiation, which makes it a very attractive choice for imaging the small bowel, especially in inflammatory bowel disease. Two major techniques are used to achieve bowel distention using magnetic resonance: magnetic resonance enteroclysis with infusion of the contrast through a nasojejunal tube and magnetic resonance enterography with oral contrast administration. 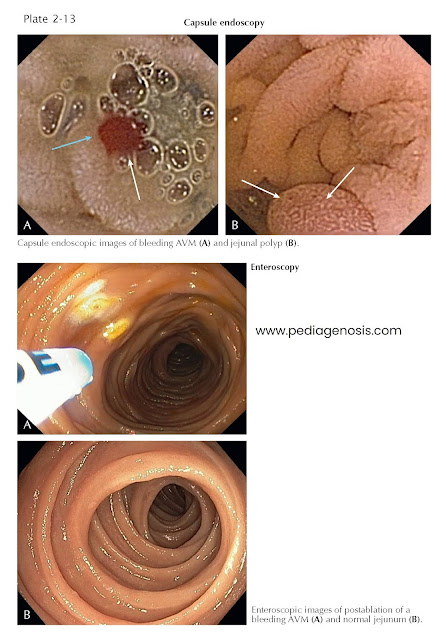 Esophagogastroduodenoscopy (EGD) is the first-line endoscopic procedure performed for most upper gastrointestinal disorders. It involves insertion of a fiberoptic endoscope through the mouth past the esophagus and stomach and into the duodenum. Push enteroscopy requires a longer endoscope that can reach the jejunum. Single-balloon or double-balloon enteroscopy allows for more extensive examination of the small bowel and also for therapeutic procedures. A flexible overtube with a balloon and a pump controller allows deep advancement of the endoscope by using a push-and-pull method with inflation and deflation of the balloon and telescoping of the intestine onto the overtube. Although these techniques are arduous and time consuming, examination of the entire small bowel is possible with their use. Intraoperative enteroscopy is often necessary in cases of obscure gastrointestinal bleeding; endoscopic evaluation is performed through enterotomies created during laparotomy. Video capsule endoscopy is a safe and noninvasive wireless endoscopic technique that allows examination of the entire small bowel. The procedure usually requires a modified bowel preparation after which the video capsule, measuring 11 by 26 mm, is swallowed with water. Following ingestion, the capsule travels past the stomach, obtains images of the small intestine, and transmits them via radiofrequency waves to a recording device. The images are downloaded and viewed at a computer workstation; however, real-time viewing is also possible. For patients who are not able to swallow or those with known gastroparesis, the capsule can be deployed directly into the duodenum via an EGD. Video capsule endoscopy is useful for evaluating obscure gastrointestinal bleeding in adults, small bowel Crohn disease, or small bowel tumors and has been shown to be superior to small bowel follow-through in detecting mucosal lesions.