pediagenosis    April 06, 2021    AnatomyPhysiology , HeadNeck    Comment
Proprioception And Reflexes
We are aware of the orientation of our limbs with respect to one another, we can perceive the movements of our joints and we can accurately assess the amount of resistance (force) that opposes the movements we make. This ability is called proprioception. The three qualities of this modality are position, movement and force. The receptors or proprioceptors that mediate this modality are principally found in the joint capsules (joint receptors), muscles (muscle spindles) and tendons (Golgi tendon organs).
The joint capsule is compressed or stretched when the joint moves, and mechanoreceptors within it signal the position of the joint, as well as the direction and velocity of the movement. Individual receptors respond to the position of the joint, as well as the direction and the velocity of the movement, but not the force. The receptor types found in the joint capsule are Ruffini-type (slowly adapting) stretch receptors (Chapter 55). 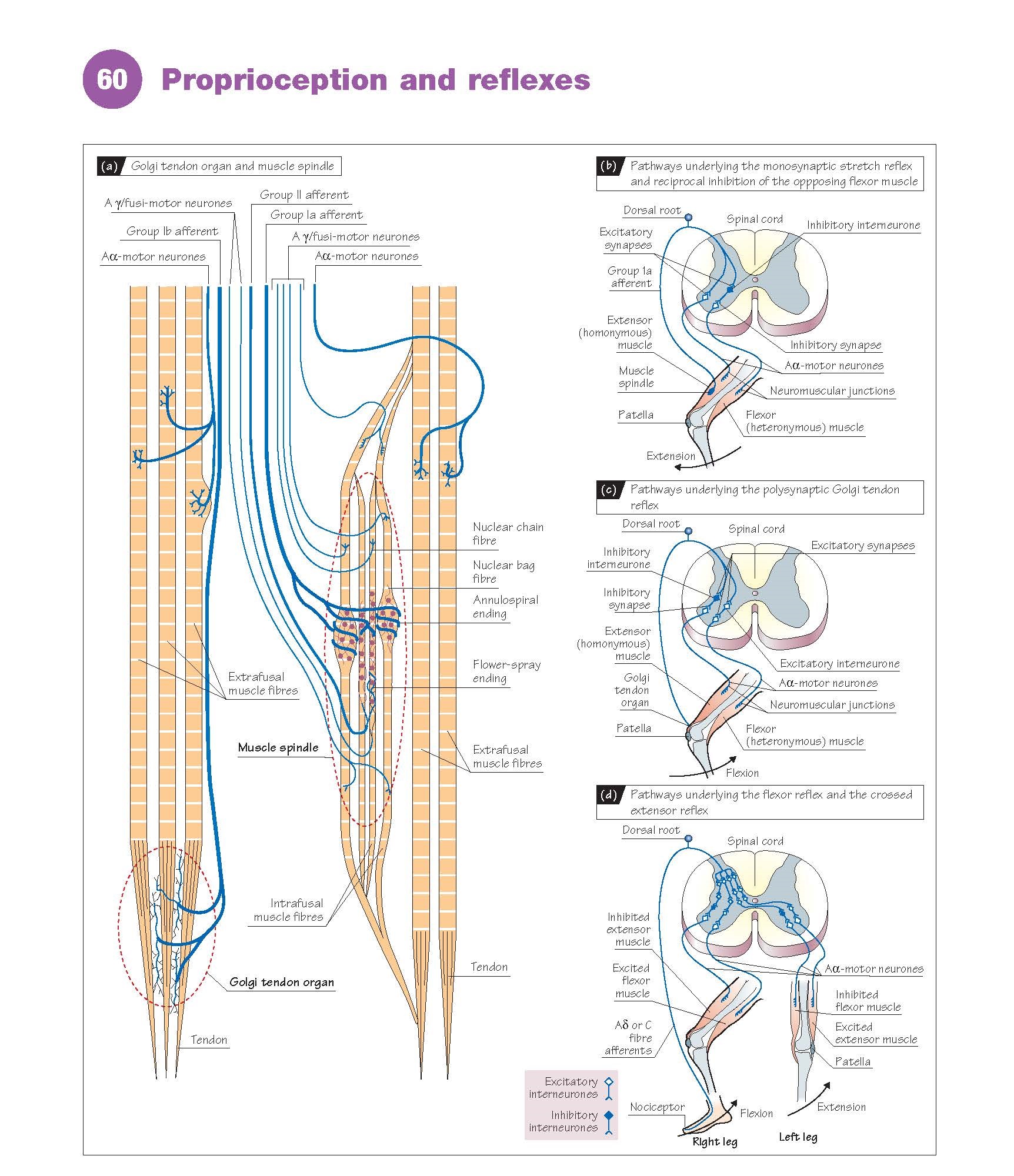 Each muscle contains a number of small muscle fibres (intrafusal muscle fibres: 15–30 μm in diameter and 4–7 mm in length) that are thinner and shorter than the ordinary muscle fibre (extrafusal muscle fibres: 50–100 μm in diameter and varying in length from a few millimetres to many centimetres). Several intrafusal fibres are grouped together and encased in a connective tissue capsule, called the muscle spindle, a specialized receptor that responds to the stretch of a muscle (Fig. 60a). Muscle spindles lie in parallel to the extrafusal muscle fibres and are elongated when the muscle is stretched. The primary sensory innervation of the muscle spindle consists of afferent fibres which wind themselves around the centre of the intrafusal muscle fibres (annulospiral ending). These are large myelinated fibres (group Ia afferents). These endings are called primary sensory endings and, when excited, they evoke a monosynaptic stretch reflex involving an excitation of the homonymous α-motor neurones and reciprocal inhibition of the heteronymous α-motor neurones (Fig. 60b).
Many muscle spindles also have a secondary sensory innervation (group II afferent). They are thinner and end in flower-spray endings (they are not involved in the monosynaptic stretch reflex).
The intrafusal muscle fibres possess a motor innervation, the Aγ- or fusi-motor neurones. They are smaller in diameter than those innervating the extrafusal muscle fibres, the Aα-motor neurones.
Stretching the muscle, thereby extending both the extrafusal and intrafusal muscle fibres, can excite the muscle spindle. However, there is a second way to excite the primary muscle spindle ending – by contraction of the intrafusal muscle fibre brought about by excitation of the fusi- or γ-motor neurone. This does not change the overall length or tension of the entire muscle, as it is too weak; however, it is sufficient to stretch the central portion of the intrafusal fibres, inducing excitation in the primary sensory ending.
Contraction of the extrafusal fibres can be triggered or at least facilitated by the muscle spindle, either by stretch of the whole muscle or by activation of the fusi- or γ-motor neurones. They can comple- ment each other or have a mutually cancelling effect. The threshold of the stretch reflex can also be varied by intrafusal activity.
The Golgi tendon organs are stretch receptors found in the muscle tendons (Fig. 60a). Each receptor is associated with the tendon fascicle of about 10 extrafusal muscle fibres, is surrounded by a capsule of connective tissue and is innervated by large myelinated afferent fibres (group Ib fibres). They are in series with the extrafusal muscle fibres and respond to tension in the muscle. They can respond both when the muscle contracts and when the muscle is stretched, unlike the muscle spindle which responds predominantly during stretching of the muscle. Golgi tendon organs protect against overloading and provide a protective reflex. In a functional sense, the segmental connections of the Ib fibres are a mirror image of the Ia fibres. A marked increase in muscle tension, whether resulting from stretch, contraction or a combination of the two, will result in inhibitory connections with the homony- mous motor neurones and excitatory connections with the heteronymous motor neurones. However, none of these connections is monosynaptic; all involve at least two synapses (Fig. 60c).
The properties of the joint receptors make it very likely that they are primarily responsible for mediating the sense of position and movement. The most likely detectors of force sensation are the muscle spindles and Golgi tendon organs. Other receptors also contribute to the sense of force, as well as movement and position, such as mechanoreceptors in the skin.
Polysynaptic motor reflexes. Many receptors in the body, other than those found in muscle, can trigger motor reflexes. Experiments on animals, in which the spinal cord has been severed, have shown that many of these reflexes are restricted to the spinal cord. They are always polysynaptic. The most prominent examples of these reflexes are the flexor reflex and the crossed extensor reflex (Fig. 60d). If a pinprick is made to a toe, the stimulated limb is pulled away. The flexor reflex is a flexion of the knee and hip joints. It is a protective reflex, pulling the limb from the site of the noxious stimulus. The delay and the magnitude of the response are very much dependent on the stimulus intensity. The higher the intensity, the shorter the latency and the quicker the response. It can also be observed that the flexion of one limb is always accompanied by the extension of the limb on the other side of the body. In other words, there is an ipsilateral flexor reflex and a contralateral extensor reflex. This contralateral extensor reflex is called the crossed extensor reflex. These reflexes are not only enhanced in spinal animals, but also in newborn and premature babies, as during the days just after birth the higher levels of the brain are not fully developed.